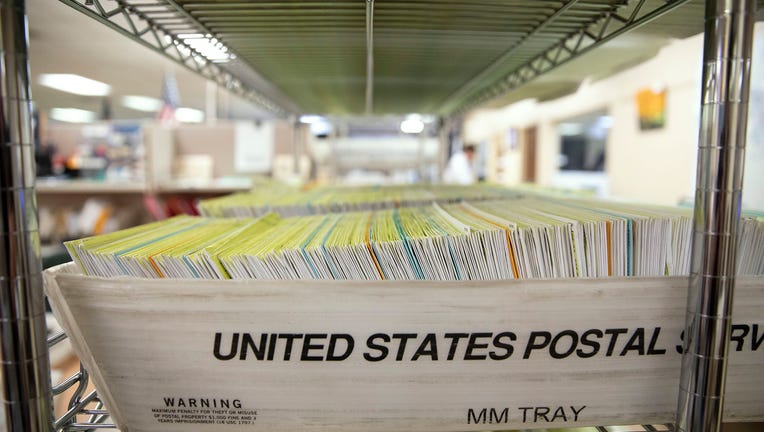 MODESTO, CA - NOVEMBER 06: Mailed in ballots sit in US Postal Service bins inside the office of the Stanislaus County Clerk on November 6, 2018 in Modesto, California.(Photo by Alex Edelman/Getty Images)

PHOENIX (AP) - Early voting started Oct. 7 in Arizona, with counties opening sites for people to cast ballots and county recorders mailing millions of early ballots to voters signed up to receive them.

More than 75% of Arizona’s approximately 4.1 million registered voters are permanently signed up to receive mail ballots, and a large number of those who don’t vote by mail vote early. In the August primary, more than 80% of the ballots cast were sent in or cast before Election Day.

Democrat Joe Biden is hoping to win the presidency in part by winning Arizona for his party for the first time since Bill Clinton won re-election in 1996. He plans to visit the state Thursday.

Biden and running mate Sen. Kamala Harris are set to meet with tribal leaders in Phoenix and then give a speech and take a bus tour with stops to talk with voters and small business owners in Phoenix and Tempe.

President Donald Trump has made repeated visits to Arizona and was set to campaign in Tucson and Flagstaff earlier this week. But he cancelled because he contracted COVID-19.

Instead, Vice President Mike Pence plans a campaign stop in the Phoenix suburb of Peoria on Oct. 8 - the same day as Biden's planned visit to the state.

At an early voting location in the Phoenix suburb of Maryvale on Wednesday, Phoenix Mayor Kate Gallego and Maricopa County Supervisor Steve Gallardo, both Democrats, urged voters to cast their ballots in the first week of early voting — and touted their support for Biden.

“We want folks to vote, and vote during the first week,” Gallardo said. “This has been a long time coming -- to be able to walk into the building right behind me and be able to cast a vote to elect new direction in this country, to elect a new leader for our country.”

The Trump campaign was also urging people to vote early, sending out an email to voters telling them voting early ensures those who vote for Trump have their votes counted.

Trump has railed against voting by mail, but he is still encouraging people to use that method in states that allow it.

Vice President Mike Pence is hosting a MAGA rally in Peoria on Oct. 8 for the reelection campaign of Donald Trump.

Voting early? You can track your ballot if you live in Maricopa County

With millions of registered voters voting early and by mail for the 2020 election, voters in Maricopa County can track their ballot.