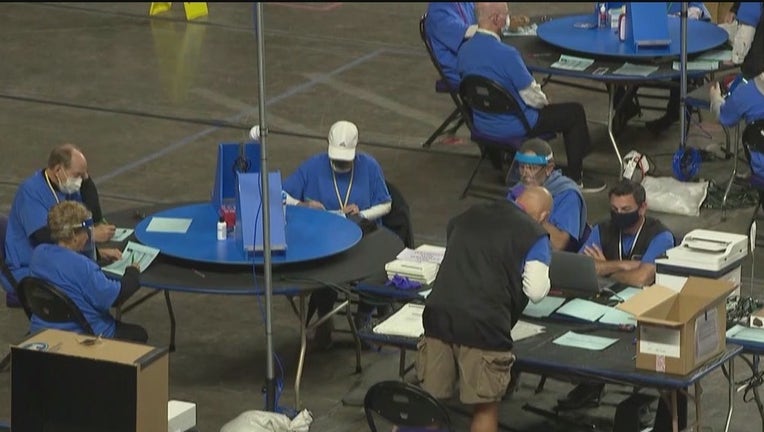 A final report of the findings is still weeks to months away, said Ken Bennett, a former Republican secretary of state working on the effort. But the milestone marks an end to the most visible portion of the unprecedented partisan election audit, which saw teams of people recruited by supporters of former President Donald Trump working through dozens of pallets of ballots on the floor of a former basketball arena.

The GOP-led Senate ordered the audit after Trump backers claimed without evidence that fraud led to his loss in Arizona and other battleground states. The Republican-dominated Maricopa County Board of Supervisors has repeatedly said the election was fair and free of any problems.

The audit can't change the election results. But it's being carefully watched by Trump and some of his most ardent supporters who believe it will finally turn up evidence to support fraud claims. President Joe Biden narrowly won Arizona, a longtime Republican stronghold that has been steadily moving toward the center.

"Audit Update: Paper examination and counting are finished today," the audit team wrote in a post on Twitter. "Thank you to all the amazing Arizona volunteers who made this audit possible!"

Election experts say the auditors are inexperienced, biased and using unreliable procedures, and their findings will be suspect. To lead the audit, GOP Senate President Karen Fann hired Cyber Ninjas, an obscure Florida cybersecurity firm with no election or auditing experience before the 2020 election. The firm's leader, Doug Logan, is a Trump supporter who has aggressively promoted false narratives of election fraud.

Workers sitting at tables in colorful shirts watched ballots swing by on a turntable, marking down results for the presidential and U.S. Senate contests, the two successes for Democrats on an Arizona ballot where Republicans mostly swept other races. They also took high resolution photos of each ballot to evaluate the composition of the paper and pen marks, apparently to test conspiracy theories that fake ballots were inserted.

That effort at the Veterans Memorial Coliseum is what has wrapped up. But Bennett said other audit work is ongoing, including the evaluation of data from election servers and voting machines. He said he expects a final report by Labor Day, but it could come as soon as late July.

"I think too much emphasis has been put on the tasks that are happening here at the Coliseum, but these are not the only two tasks of the audit," Bennett said.

The Arizona Senate Liaison to the election audit said '..I think it's very important that we do this, to make sure that the people of Arizona can have 100 percent confidence that their elections are transparent, the outcomes were fair, and that they are publicly verified. So we'll do it until it's done. And that's our plan.' (May 10)

Auditors will vacate the Coliseum by the time their lease expires Wednesday evening, Bennett said in a text message. He did not respond to questions about where the ballots will go and whether they will be returned to the county.

Observers working for Democratic Secretary of State Katie Hobbs have documented a variety of security lapses, shifting procedures and other issues, including the sloppy protection of passwords and combinations on locks controlling secured areas.

It's also unclear who is paying for the audit, but several fundraising groups tied to Trump supporters claim to have collected millions of dollars in donations. The Senate signed a $150,000 contract with Cyber Ninjas, which Logan has acknowledged is not enough to cover the costs.

Fann has said the audit is not meant to overturn the 2020 election but rather to see whether laws need improvement and instill confidence in elections. Logan says his personal views are irrelevant.