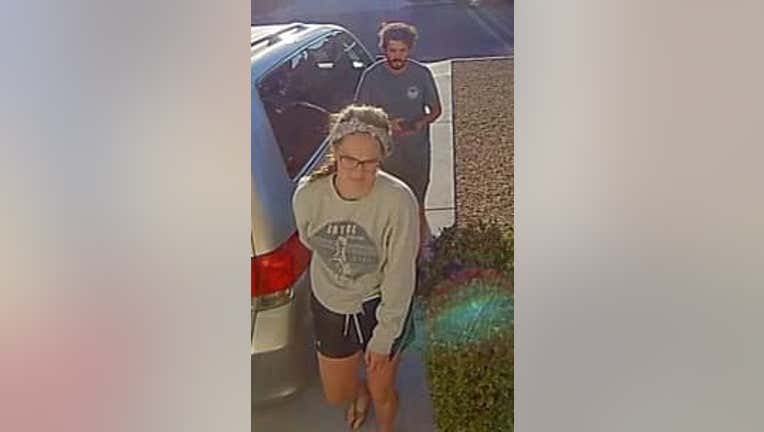 DEATH VALLEY NATIONAL PARK, Calif. (AP) - An Arizona tourist died and his wife was rescued on April 9 after their vehicle got two flat tires and they went missing in Death Valley National Park in California.

Alexander Lofgren, 32, and Emily Henkel, 27, were found on a steep ledge near Willow Creek in the desert park, but Lofgren was dead, according to a statement from the Inyo Creek Sheriff’s Office.

Henkel was flown to Lemoore Naval Air Station for treatment, and there was no immediate word on her condition.

The Tucson residents, described as experienced campers, failed to return Sunday from a camping trip and were reported missing Tuesday.

On Wednesday, park staff found the couple’s missing Subaru. According to the Sheriff’s Office, a note in the car stated: "Two flat tires, headed to Mormon Point, have three days’ worth of water."

That proved to be "a crucial tip in directing search efforts," the Sheriff’s Office said.

On Thursday, the couple was spotted from the air, but crews couldn’t hoist them up and weren’t able to reach them in the remote area until shortly after 11:30 a.m. Friday, authorities said.

The cause of Lofgren’s death is under investigation.

"This has been a tremendously difficult operation in a very unforgiving geographic area of Inyo County, I sincerely hope for healing and recovery for all involved," Sheriff Jeff Hollowell said in the statement.

According to the verified Twitter page of Arizona Senator Kyrsten Sinema, Lofgren is a former intern.

"He had a heart of gold and worked so hard for Arizona and our country," read a portion of the tweet.

Death Valley, in the Mojave Desert in eastern California, is one of the hottest and driest places in the world. It had highs in the 90s this week.

The rugged park has claimed several lives over the years. In January, an experienced climber who was descending a canyon plunged to his death when he was caught in a rockslide.

CBP: Over 172,000 migrants attempting entry at SW border were encountered in March

In the border battle, a surge of migrants continues to flood the U.S. - Mexico border and newly released numbers show just how many have come. The Border Patrol says it's the most they've seen in 20 years.

FOX 10's Anita Roman introduces us to a teen who is raising money and awareness for child abuse and neglect by starting the #5toomany campaign.

With store and restaurant donations, Waste Not gets surplus perishable food to those in need in Arizona

An Arizona non-profit needs drivers to transport food from local shops to the people who need it most. FOX 10's Ty Brennan reports.