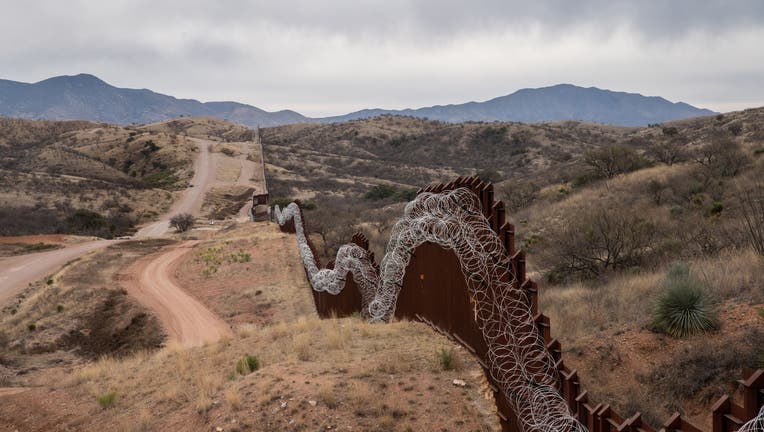 A general view of the US border fence, covered in concertina wire, separating the US and Mexico, at the outskirts of Nogales, Arizona, on February 9, 2019. (Photo by ARIANA DREHSLER/AFP via Getty Images)

DOUGLAS, Ariz. (AP) - Heat exposure killed 19-year-old Cesar de la Cruz on an Arizona trail in July during his trek up from southern Mexico. The body of Juan Lopez Valencia, another young Mexican man, was discovered Aug. 3 along a dry wash on Native American land.

After the hottest, driest summer in state history, authorities have recovered close to a 10-year record in the number of bodies of people who crossed from Mexico into Arizona’s deserts, valleys and mountains. It’s a reminder that the most remote paths to enter the U.S. can be the deadliest.

Enforcement efforts in neighboring states over the years have helped drive people into Arizona’s difficult terrain, and some officials and activists believe stepped-up construction of President Donald Trump’s border wall this year, largely in Arizona, also could be pushing migrants into dangerous areas without easy access to food and water.

De la Cruz and Lopez Valencia were among 214 confirmed or suspected migrants whose deaths at the Arizona border were documented from January to November by the nonprofit Humane Borders and the Pima County Medical Examiner’s Office, which together map recoveries of human remains.

"There’s no doubt in my mind that the high temperatures have had a lot to do with it," said Mike Kreyche, Humane Borders’ mapping coordinator.

The highest annual number that the project documented was 224 in 2010. It wasn’t clear if 2020 would exceed that once December is factored in.

The Border Patrol keeps its own statistics, counting the remains of suspected migrants it learns about in the course of its duties, according to its parent agency, Customs and Border Protection. CBP said that if another agency recovers remains and doesn’t notify the Border Patrol, it won’t be included in its tally.

For the first nine months of 2020, the Border Patrol listed 43 deaths in the Yuma and Tucson sectors that make up the Arizona border area. The mapping project tracked 181 deaths over the same period.

During the 2019 calendar year, the federal government listed 70 deaths in Arizona, while the mapping project counted 144.

Federal statistics show that search and rescue operations near Arizona’s border inexplicably dipped to 213 during a record-hot July and August, from 232 in July and August 2019. But early fall figures indicate rescues across the Southwest were trending up.

Hess told the Pima County Board of Supervisors in October that high temperatures and dry weather were apparently the reason more bodies were found this year. While recoveries included skeletons, many deaths were recent.

The National Weather Service in Phoenix says the average high temperature was nearly 110 degrees (43 degrees Celsius) in July and nearly 111 in August, helping make it the hottest summer in history. Phoenix’s highs tend to be roughly the same as those in Arizona’s Sonoran Desert just north of the boundary with Mexico, forecasters say.

The weather service said July and August also were the state’s driest summer months on record.

Hess told county supervisors that he didn’t detect any major changes in where people crossed.

Still, some officials and activists working near the Arizona border believe wall construction could be sending migrants into riskier places. The Trump administration expects some 450 miles (725 kilometers) of border wall to be done by year’s end, much of it in Arizona.

"The wall has sent a lot of people to rough terrain in our area," said Santa Cruz County Sheriff Tony Estrada, whose jurisdiction includes Nogales, Arizona. "It’s like driving livestock into a canyon where they ultimately die."

The remains of more than 3,000 migrants have been found near the Arizona border in the two decades since heightened enforcement in San Diego and El Paso, Texas, began driving people into Arizona’s deserts and mountains.

Authorities have been able to identify about two-thirds. Most came from Mexico and Guatemala, Honduras and El Salvador.

"It is important to remember that these are human beings, not just numbers," said Tony Banegas, CEO of the Tucson-based Colibri Center for Human Rights, which works with the medical examiner’s office to help identify the bodies. "The only thing we can be sure of is there are a lot more people who died out there that we don’t even know about."

It’s not just in Arizona. Mass graves of border-crossers began turning up in South Texas over the last decade after large numbers of migrants began trekking through isolated ranches to avoid the official checkpoint by the small town of Falfurrias.

Brooks County Sheriff Benny Martinez said his Texas department has seen an increase this year in distress calls by border-crossers, but the bodies of suspected migrants found in the county dropped to 33 by the end of November, compared with 45 in the same 11-month period last year.

"We’ve been putting up placards on fixed objects like poles, cattleguards, railroad crosses telling them to dial 911 for help," Martinez said.

In southern Arizona, No More Deaths and similar humanitarian groups leave water jugs and other provisions in remote places. The group gained national attention when one of its members was tried and acquitted last year of harboring migrants.

"These people will keep coming because most of them have nothing back home," Estrada said.