The children attended Kyrene del Cielo Elementary School, and the district is now speaking out about the tragedy. FOX 10's Danielle Miller reports.

PHOENIX – An Arizona woman accused in the grisly slayings of her two children with a meat cleaver made her first court appearance on May 17, where she denied harming them.

"I did not kill anybody," Yui Inoue, 40, said through a Japanese interpreter before a Maricopa County Superior Court commissioner in Phoenix told her not to talk about the case except with an attorney.

Wearing an orange jumpsuit and a face mask in front of a podium, Inoue otherwise spoke little during her initial appearance, where prosecutor Jay Rademacher asked that she be held on a $2 million cash bond.

Rademacher described how the bodies of Inoue’s 9-year-old daughter and 7-year-old son were found in their suburban Phoenix apartment lacerated, mutilated and "almost completely decapitated."

"These children were helpless, Your Honor, and did everything they could to fight their mother," Rademacher said.

Upon hearing the prosecutor’s description of the children’s injuries, Inoue put her head down on the podium.

Inoue is facing two counts of first-degree murder. The commissioner ordered she be held on the requested bond, surrender her passport and wear an electronic monitoring device. He also ordered her a court-appointed defense attorney. It was not immediately known if one had been assigned.

Inoue’s next preliminary court hearing is scheduled for May 25. She was involved in a prior probate case, but the records are sealed because the case involved a mental health issue.

"I did not kill anybody."

"This tragedy is just the cap of a really difficult school year," said Erin Helm with the Kyrene School District.

"We had the principal pull the staff together," Helm said. "This was a Zoom meeting so that staff could begin processing it themselves so that they are better prepared to be supportive of children on campus today. That said, in addition to having professionals available to students or staff, we also have a dozen district employees who are present so that they can step into a classroom to relieve a teacher if needed." 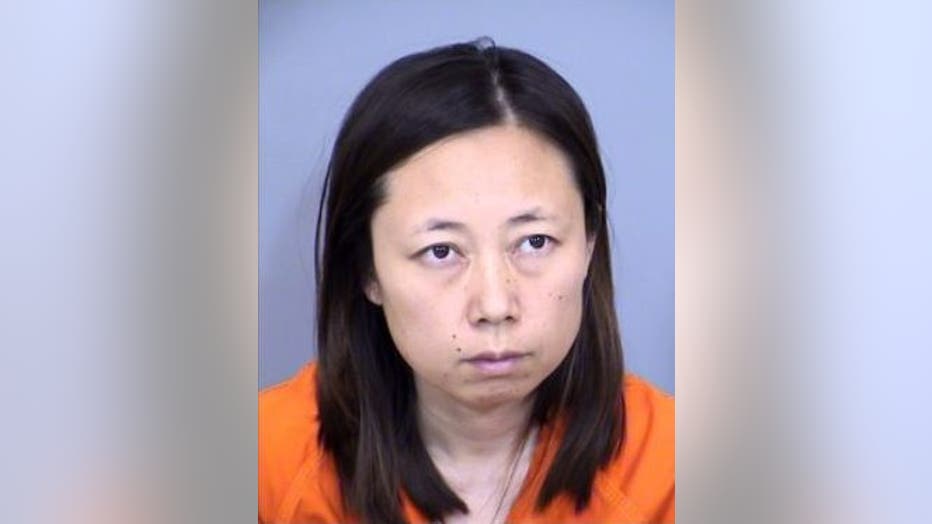 Inoue left went to a Tempe police station Saturday morning and told officers that "she was hearing voices telling her to kill her children," according to charging documents.

Police called Inoue’s husband. He said the couple, who filed for divorce in April, had fought the night before over money she wanted to move to Japan. He said she threatened to stab him so he left around 12:30 a.m.

Police said they had been called to the woman’s apartment earlier Saturday morning because of a domestic dispute involving a husband and wife.

Her husband told investigators he slept in his car in a parking lot. He told authorities he did not think she would harm their children.

Police also said there was no apparent reason at the time to call child welfare authorities.

Later that morning, different officers went to the apartment and discovered the bodies of both children under a blanket and boxes, as well as a large amount of blood.

The children, who had numerous wounds, were immediately pronounced dead. Their names have not been released.

Police arrested the mother after noticing bloodstains on her heel, superficial cuts on her fingers, and bruising on her hands and knees. They also noticed blood spatter on suitcases in her car.

When questioned by police through a Japanese interpreter, Inoue said she woke up around 4:30 a.m. with blood on her hands and arms. She found her children dead but said she had no memory of doing anything to them. She said she took a bath before heading to the police station.

Tempe police recovered a meat cleaver with a 6-inch blade from her car. It was in a bag containing clothes with bloodstains.

DCS says at the time of the fatalities, the family had an open investigation. On March 2, 2021, the department received a report alleging Ms. Inoue neglected the the 7-year-old boy. The report alleged Inoue took him and their whereabouts were unknown. Police eventually located them behind a convenience store. She was taken to a psychiatric hospital and the child was returned to his father.

"During the interview, the DCS investigator did not observe any visible signs of abuse or neglect on the children. The children reported they felt safe with their parents. The investigation did not find evidence to remove the children from the home. This investigation was still open at the time of the fatalities."

Officials with Kyrene School District say two children who were allegedly killed by their mother on May 15 attended a school within their district.

A 9-year-old girl and 7-year-old boy have been found dead after a woman told a Tempe police officer she was hearing voices telling her to kill her kids, officials said Saturday morning.