Harvard University researchers gave Arizona a C grade for how it's efficiently inoculating all eligible people with COVID-19 vaccine doses.

PHOENIX - If you were to give Arizona a grade on its rollout of the COVID-19 vaccine, what would you give it?

Researchers at Harvard University attempted to answer that question by comparing all 50 states in the US.

Arizona has three mass vaccination sites: One in Glendale, one in Phoenix and the third is in Tucson, but the question researchers were looking to answer is, "How is Arizona doing administering everyone that’s eligible?"

Not too long ago, President Joe Biden complimented the state's 24/7 vaccination site at State Farm Stadium during a virtual tour, saying, "I think they’re going to be coming to you to look at how you did it, because you’re doing such a good job," Biden remarked.

However, the C grade remains. as Harvard University researchers at the Belfer Center used Centers for Disease Control and Prevention data to score the state. 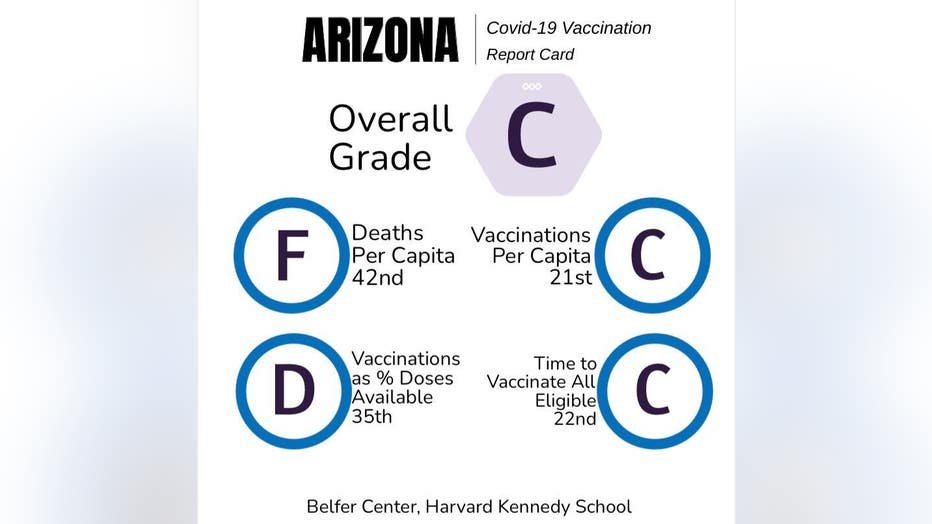 "We all could do better and I think that’s the message and we are doing that, week by week," said Dr. Ross Goldberg with the Arizona Medical Association.

Adding, "I think we’ve overcome some issues and I think there’s others we need to address and there’s somethings we don’t have control over."

Another grade Arizona received was an F for the COVID-19 deaths the state saw, ranking No. 42 overall.

In addition, the state received a D grade in vaccinations to available doses, and C grades for vaccinations per capita and time it will take to vaccinate all eligible people.

Gov. Doug Ducey's office didn’t comment on the grades but signed onto a letter Monday with eight other governors asking the White House to change how the CDC reports data, claiming it doesn’t reflect reality.

"We’re in the middle of the pack on some of these things. Obviously we’d like to be on top of everything but we’ve come such a long way in such a short period of time. What are we going to look like next month and what are those numbers going to look like?" Goldberg said.

The Arizona Department of Health Services didn't comment on the grades but questioned the data used by the Harvard researchers.

Wondering what the state with the best overall grade is? It's West Virginia.