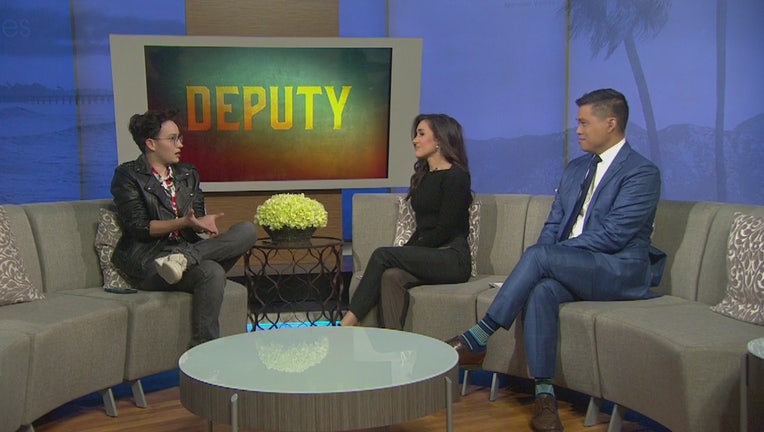 LOS ANGELES - You may have seen them as the fiery Casey on Netflix’s “13 Reasons Why,” or as Sin on CW’s “Arrow.” Now, Bex Taylor-Klaus stars on FOX’s “Deputy.”

The show blends the spirit of a Western film with modern attitudes in the hustle and bustle of Los Angeles. The show features a diverse cast playing fictional characters working in the LA County Sheriff’s Department.

Thursday night marks a historic episode for the show. Taylor-Klaus' character, Deputy Brianna Bishop, will come out as non-binary, which makes them the first character on network television to identify as such. Non-binary means a person who does not identify as male or female.

The 25-year-old actor from Atlanta, who is also an LGBTQ+ advocate, also identifies as non-binary.

"It took me a long time to figure it out as well, so I can understand when people mess up and have ‘pronoun accidents,’ as I call them. It’s totally normal…as long as the intention is there and the attempt is there, that’s what really matters to me," Taylor-Klaus said on FOX 11 News at Noon.

They say that working with Yara Martinez, who plays Dr. Paula Reyes, made filming the iconic scene comfortable.

"She’s there with so much compassion and power…raw, unadulterated power in her performance so that made it easy to hit that emotion and find that honest of what it’s like to come out for the first time in a safe space," they said.

Taylor-Klaus replaced another actor when the role was recast.

The character was originally written as a lesbian. However, after having a conversation with “Deputy” showrunner Kim Harrison, they liked the idea of making Deputy Bishop non-binary.

"It’s huge. I’m the first non-binary person on a network TV show…out at least, which is exhilarating and terrifying," they said.