President Joe Biden spoke from the East Room of the White House, detailing why passing his economic plan is crucial to the United States.

WASHINGTON - President Joe Biden made his case for his economic plan again Thursday, saying America is at an inflection point.

During a 22-minute speech in the East Room of the White House, he said the economy has functioned particularly well for the top 1% of Americans over the years, but not so much for everyone else.

And that inequity has only been exacerbated by the COVID-19 pandemic. Many billionaires saw their net worth go up by $1.8 trillion since March 2020 while average Americans had to deal with record unemployment, job instability and the threat of evictions.

Biden said the top 1% can more easily evade taxes because the IRS can’t exactly see their income. Economists estimate that accounts for $160 billion in unpaid taxes every year.

And it’s not just wealthy individuals Biden took to task Thursday. The president said the 55 most profitable corporations paid no federal income taxes despite $40 billion in revenue.

Even though he feels the wealthy have gotten wealthier and corporations have lost their sense of responsibility to the community, Biden touted America’s economic progress since he took office. 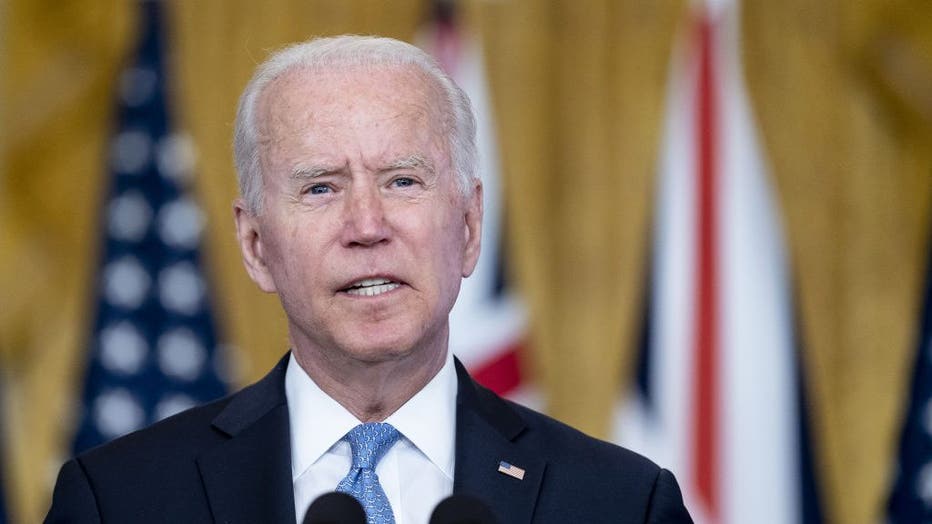 Unemployment reports have shown jobless claims trending down in most weeks. His American Rescue Plan provided a new round of stimulus checks for American workers and expanded the child tax credit to include more families. And he said America is the lone developed country to have a bigger economy than before the pandemic.

Even so, he stressed it’s not enough for the U.S. to rebuild what it lost in 2020. America needs to "build back better."

"For a long time, this economy has worked great for those at the top," Biden said. "For ordinary Americans, the people who built this country, they have been basically cut out of the deal."

RELATED: Senate’s $3.5T budget: What you need to know

Throughout his presidency, Biden has touted his Build Back Better plan — which would cut taxes for families with children and workers without children while lowering the cost of child care, higher education, housing, health care and prescription drugs.

The House passed Biden’s $3.5 trillion rebuilding plan last month, but it faces an uphill battle in the Senate. Republicans are in staunch opposition to the measure — dismissing it as "far-left" and "socialism."

They’ve said little more than that regarding the spending, choosing to focus their disdain on Biden’s recent vaccine measures. Last week, Biden signed an executive order requiring employers with more than 100 workers to receive proof of vaccination from their employees.

Unvaccinated workers have the option to undergo weekly testing.

Republican governors have pledged to block Biden’s executive order, calling it an overreach.

Biden dismissed such claims, citing surveys that show most Americans support vaccine mandates in schools, the workplace and venues.

Senate Democrats plan on passing Biden’s economic plan through reconciliation, meaning it only needs 51 votes and the GOP couldn't use a filibuster to block it.

Even so, some Democrats are at odds over the bill’s price tag, which threatens to derail Biden’s proposal altogether.

More liberal senators, who are in favor of the legislation, have threatened to block the $1.2 trillion bipartisan infrastructure bill if moderate Democrats don’t support the $3.5 trillion plan.

Still, Democrats appear determined not to let this moment slip. Even with their majority at risk, they appear poised to push the package to passage, making it a central referendum in the midterm elections in 2022 on whether voters embrace the vision put forth by Democrats who control the White House and Congress.