Biden told a crowd in Atlanta that he'd been having quiet conversations with senators for months over the two bills — a lack of progress that has brought his criticism from activists in his own party.

ATLANTA - President Joe Biden and Vice President Kamala Harris will be in Atlanta on Tuesday to discuss the need for federal legislation to protect the right to vote. But some civil rights activists, uninterested in another speech, don’t want to hear it.

Biden on Tuesday will pay tribute to civil rights battles past — visiting Ebenezer Baptist Church, where the late Rev. Martin Luther King Jr. once held forth from the pulpit, and placing a wreath at the crypt of King and his wife, Coretta Scott King. His speech isn’t expected to contain any announcement of new executive action. Instead, aides say, he’ll use the presidential megaphone to speak out about voting rights and concerns about American democracy.

"The president will forcefully advocate for protecting the most bedrock American right, the right to vote and have your voice counted in a free and fair and secure election that is not tainted by partisan manipulation," White House press secretary Jen Psaki said Monday. 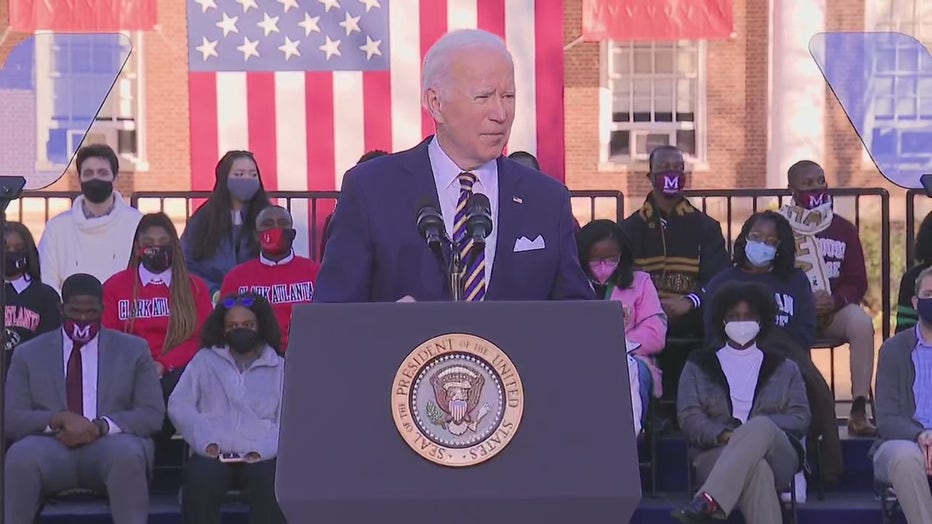 President Joe Biden and Vice President Kamala Harris honored the late Rev. Dr. Martin Luther King, Jr. and Mrs. Coretta Scott King by laying of a wreath on their final resting place at The King Center on Tuesday during their visit to Atlanta to push for voting reform legislation.

WHAT IS THE FILIBUSTER? SENATE RULES AND CALLS FOR CHANGE EXPLAINED

It’s not enough for some voting rights advocates, who are boycotting the speech and instead spending the day working. Democratic gubernatorial candidate Stacey Abrams also is skipping the event; aides said she had a conflict but didn’t explain further.

"We’re beyond speeches. At this point, what we need, what we are demanding, is federal legislation," said LaTosha Brown of Black Votes Matter. And it can’t happen soon enough, she said.

Activist groups said they’d prefer that Biden stay in Washington to work on breaking the logjam on voting rights legislation in Congress. So far Democrats have been unable to agree among themselves over potential changes to the Senate filibuster rules to allow action on voting rights, despite months of private negotiations.

Biden himself has waded only cautiously into the debate — he’s a former longtime senator who largely stands by existing rules but is also under enormous political pressure to engineer a breakthrough.

Was Stacey Abrams absent from the Biden-Harris events?

President Joe Biden address on on voting reform in Atlanta

Abrams was not present for the President's events, but she attempted to address notions that she was distancing herself from Biden.

An Abrams aide said Monday that an unspecified scheduling conflict would prevent her from attending Biden’s event, Abrams tweeted a welcome to Biden, saying the "fight for voting rights takes persistence" and thanking him "for refusing to relent until the work is finished." And as he left the White House on Tuesday, Biden said he spoke to Abrams earlier in the day and that "we’re all on the same page."

Biden on Tuesday said he and Abrams are "on the same page."

"We have a great relationship," Biden said. "We got our scheduling mixed up."

Voting rights advocates in Georgia and nationwide are increasingly anxious about what may happen in 2022 and beyond, following enactment of Republican-pushed laws that make it harder to vote coming off Donald Trump’s loss in 2020 and subsequent push to overturn the results, despite no evidence of widespread fraud.

WHAT IS IN GEORGIA'S NEW ELECTION LAW?

Georgia has been the epicenter of debate on voting rights after Gov. Brian Kemp signed Senate Bill 202 into law. The GOP-sponsored bill was in response to the 2020 election which saw the state swing for Biden over then-President Donald Trump and vote in two Democratic US Senators during a runoff. Supporters of the bill said it helps to intensify the integrity of voting in the state while some see it as a form of voter suppression against minority groups.

"Before @JoeBiden brings his campaign of falsehoods to GA tomorrow, let’s remember that even the liberal media called out his lies about SB 202," Kemp tweeted on Monday. "This administration will say and do anything to push their radical agenda, and I’m proud to stand in the way."

Who else will be coming for the Presidential visit?

Democratic Sen. Raphael Warnock of Georgia, who is senior pastor of the church Biden will visit and who made history as the first Black senator elected in Georgia, said ahead of the speech that "anything that can happen that will continue to shine a bright light on the urgency of this issue is important."

Warnock planned to travel with Biden to Georgia on Tuesday. He said he believes Biden understands that "democracy itself is imperiled by this all-out assault that we’ve been witnessing by state legislatures all across the country, and this is a moral moment. Everybody must show up."

Sen. Jon Ossoff, D-Ga., in August introduced the "Right to Vote Act," which he said would create the first-ever affirmative Federal voting rights guarantee for all U.S. citizens. Later that same month, House Democrats passed the John Lewis Voting Rights Advancement Act with no Republican support. Neither piece of legislation has moved forward since.

And Psaki rejected the idea that Biden hasn’t been a strong enough advocate.

"I think we would dispute the notion that the president hasn’t been active or vocal. He’s given a range of speeches, he’s advocated for voting rights to pass," she said. "We understand the frustration by many advocates that this is not passed into law yet. He would love to have signed this into law himself."

But laws have already passed in at least 19 states that make it more difficult to vote. Voting rights groups view the changes as a subtler form of the ballot restrictions like literacy tests and poll taxes once used to disenfranchise Black voters, now a key Democratic constituency.

And Republicans who have fallen in line behind Trump’s election misinformation are separately promoting efforts to influence future elections by installing sympathetic leaders in local election posts and backing for elective office some of those who participated in the violent Jan. 6 riot at the U.S. Capitol a year ago.

Why is Georgia so important?

Georgia is at the center of it all, one of the key battleground states in the 2020 elections. As the votes were being recounted, Trump told a top state election official that he wanted the official to "find" enough votes to overturn his loss. The state’s electoral votes nonetheless went to Biden and both of its Senate seats went to Democrats as well.

Then last year, the Republican governor signed a sweeping rewrite of election rules that, among other things, gives the State Election Board new powers to intervene in county election offices and to remove and replace local election officials. That has led to concerns that the Republican-controlled state board could exert more influence over the administration of elections, including the certification of county results.

The Georgia voting activists said they worked tirelessly to give Democrats control of the Senate and White House, and it’s time for Washington to step up.

Congressional Democrats, for their part, have written voting legislation that would usher in the biggest overhaul of U.S. elections in a generation by striking down hurdles to voting enacted in the name of election security, reducing the influence of big money in politics and limiting partisan influence over the drawing of congressional districts.

The package would create national election standards that would trump state-level GOP laws. It would also restore the ability of the Justice Department to police election laws in states with a history of discrimination.

But in order to pass the legislation, which Republicans have outright rejected, the Democrats say they must change Senate rules allowing a minority of 41 senators to block a bill.

Senate Majority Leader Chuck Schumer, D-N.Y., set up Martin Luther King Jr. Day on Jan. 17 as the deadline to either pass the voting legislation or consider revising the rules. The Senate is likely to hold a series of test votes this week intended to underscore Republican opposition.

"The fight for the ballot is as old as the Republic," Schumer wrote to his colleagues. "Over the coming weeks, the Senate will once again consider how to perfect this union and confront the historic challenges facing our democracy."

This is not the first time both the president and vice president have visited Atlanta together. The two visited the Centers for Disease Control headquarters back in March.