The three-way gathering is held most years, although there was a hiatus while Donald Trump was U.S. president. It’s often called the "three amigos summit," a reference to the deep diplomatic and economic ties among the countries.

MEXICO CITY - President Joe Biden, Mexican President Andrés Manuel López Obrador and Canadian Prime Minister Justin Trudeau sought to downplay their frustrations with one another on migration and trade as they met for the near-annual North American Leaders Summit.

The leaders offered a unified front on Tuesday despite tensions that have put a strain on their relationships even as Biden has made repairing alliances a cornerstone of his foreign policy agenda.

The tensions were front and center when Biden and López Obrador met on Monday, with the Mexican president complaining of "abandonment" and "disdain" for Latin America.

But as they closed Tuesday's summit in Mexico City with a joint news conference, the leaders offered an optimistic outlook.

"We’re true partners the three of us," said Biden, adding that they had "genuine like" for one another. "We share a common vision for the future, grounded on common values."

López Obrador, for his part, thanked Biden for not building "even one meter of wall," a not so subtle dig at Biden's Republican predecessor,  Donald Trump. The warmth during their joint press conference stood in stark contrast to the more brusque exchange a day earlier. 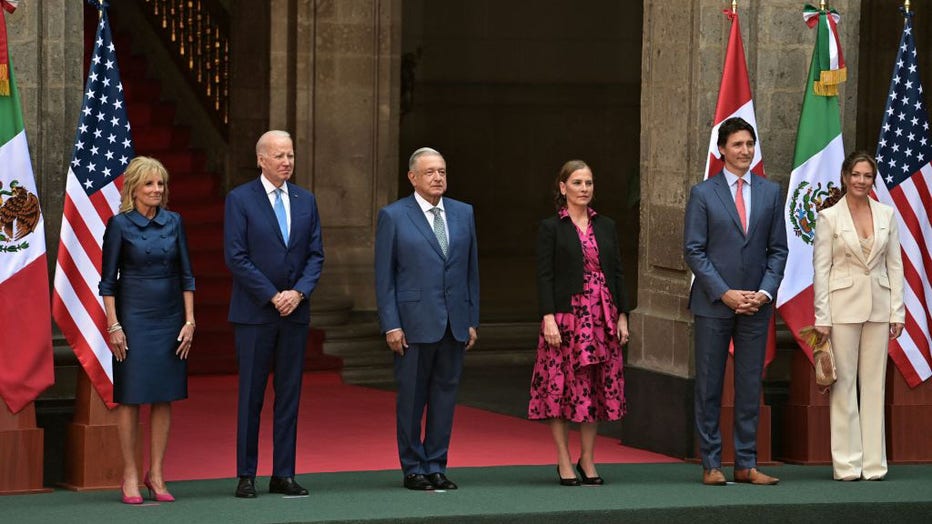 The three-way gathering is held most years, although there was a hiatus while Trump was president. It’s often called the "three amigos summit," a reference to the deep diplomatic and economic ties among the countries.

However, the leaders have found themselves at odds, especially as they struggle to handle an influx of migrants and to crack down on smugglers who profit from persuading people to make the dangerous trip to the United States.

In addition, Canada and the U.S. accuse López Obrador of violating a free trade pact by favoring Mexico’s state-owned utility over power plants built by foreign and private investors. Meanwhile, Trudeau and López Obrador are concerned about Biden’s efforts to boost domestic manufacturing, creating concerns that U.S. neighbors could be left behind.

Trudeau emphasized in a one-on-one meeting with Biden the benefits of free trade and warned against Buy America policies that the U.S. administration has promoted, according to the prime minister's office. Nearly 80% of Canada’s exports go to the U.S., so avoiding protectionism remains a priority for Canada.

The key takeaways from the summit revolve around better connections among the three nations and a shared goal of a stronger North America on energy and in particular semiconductors, climate and a pledge to cut methane emissions, an agreement to manage large waves of migrants coming to the region and a more cohesive regional strategy on dealing with future pandemic-related health threats.

In their talks on Monday, López Obrador challenged Biden to improve life across the region, telling him that "you hold the key in your hand."

"This is the moment for us to determine to do away with this abandonment, this disdain, and this forgetfulness for Latin America and the Caribbean," Lopez Obrador said. 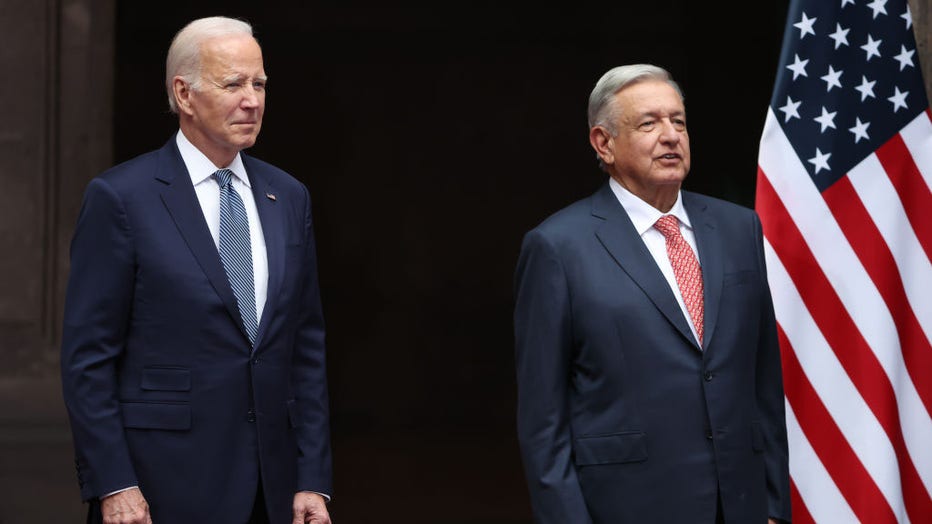 Biden responded by pointing to the billions of dollars that the United States spends in foreign aid around the world.

At the start of Tuesday's Biden-Trudeau meeting, the leaders spoke familiarly and with optimism. Trudeau called the U.S. president "Joe" and Biden joked with Trudeau — after the Canadian leader had delivered a statement to reporters in English and French — that he should have paid more attention in his college French classes.

Biden and Trudeau also discussed their countries' efforts to support Ukraine nearly 11 months after Russia's invasion. Canada announced Tuesday that it would buy an American-made National Advanced Surface to Air Missile System, or NASAMS, to be donated to Ukraine. The medium-range ground-based air defense system, which protects against drone, missile and aircraft attacks, costs about $406 million and brings Canada's contribution to Ukraine to more than $1 billion since the start of the war.

The White House said in a statement that the leaders also discussed "the generational opportunity to strengthen supply chains for critical minerals, electric vehicles, and semiconductors." The U.S. administration also announced that Biden will make his first visit to Canada as president in March.

"There’s a lot of reasons to be optimistic, especially for those of us in our countries," Trudeau said. "But it’s going to take a lot of work, something neither you or I or most our citizens have ever been afraid of."

Biden and López Obrador haven’t been on particularly good terms for the past two years. The Mexican leader made no secret of his admiration for Trump, and last year he skipped a Los Angeles summit of the Americas because Biden didn’t invite the authoritarian leaders of Cuba, Venezuela and Nicaragua.

But despite the tension, there's been cooperation. The U.S. and Mexico have also reached an agreement on a major shift in migration policy, which Biden announced last week.

Under the plan, the U.S. will send 30,000 migrants per month from Cuba, Nicaragua, Haiti and Venezuela back across the border from among those who entered the U.S. illegally. Migrants who arrive from those four countries are not easily returned to their home countries for a variety of reasons.

In addition, 30,000 people per month from those four nations who get sponsors, background checks and an airline flight to the U.S. will be able to work legally in the country for two years.

The number of migrants crossing the U.S.-Mexico border has risen dramatically during Biden’s first two years in office. There were more than 2.38 million stops during the year that ended Sept. 30, the first time the number topped 2 million.

For the first time as President, Biden visits the U.S.-Mexico border. He was greeted by Texas Governor Greg Abbott who handed the President a letter with five solutions to help with immigration issues.

López Obrador spoke at length about Mexico’s efforts to control the flow into the United States of fentanyl, the synthetic opioid that has become a scourge for many American communities. He noted that his government gave the military control of sea ports to help with the interdiction of precursor chemicals coming from Asia.

"We are battling fentanyl, these chemicals, and we are doing it because we care. No human is foreign to us," he said. "It really matters to us to be able to help with what is happening in the United States, the deaths from fentanyl. But also as we discussed today, it is not only an issue for the United States, because if we don’t confront this problem, this scourge, we are going to suffer it, too. So we have to act in a coordinated way."

Canada is being nudged by the U.S. and other allies to lead an international mission to Haiti to help solve the ongoing humanitarian and security crisis.

Haitian Prime Minister Ariel Henry and the country’s Council of Ministers sent an urgent appeal Oct. 7 calling for "the immediate deployment of a specialized armed force, in sufficient quantity" to stop the crisis caused partly by the "criminal actions of armed gangs." But more than three months later, no countries have stepped forward.

Trudeau on Tuesday called the situation "heartbreaking." Both he and Biden said they will work with the United Nations Security Council to assist the Caribbean nation but also expressed caution about direct intervention.

"We need to make sure that the solutions are driven by the people of Haiti themselves," Trudeau said.