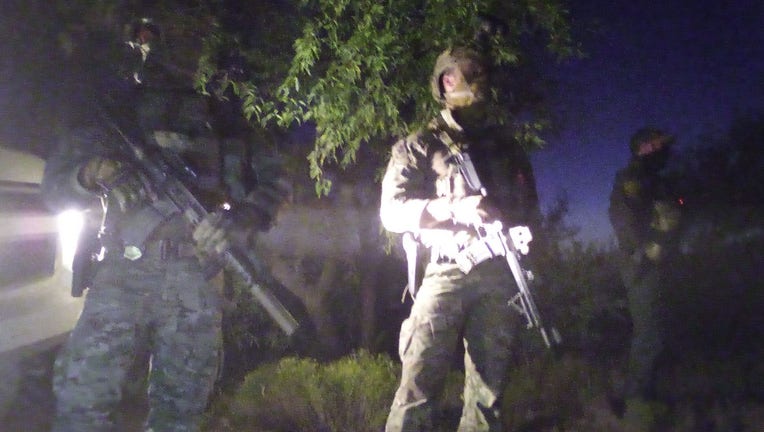 More than 30 agents from Border Patrol raided a humanitarian aid station in southern Arizona on Oct. 5, according to No More Deaths. (Photo: No More Deaths)

PHOENIX (AP) - The Border Patrol raided a humanitarian group’s aid camp on Oct. 5, following a pattern of criminalization that has grown under the Trump administration.

Agents apprehended 12 immigrants and detained seven volunteers at a No More Deaths camp near the U.S.-Mexico border in Arizona in what was the second raid since the summer. The volunteers were eventually released without charges.

The raid follows the two trials the federal government has brought against Scott Warren, a volunteer with No More Deaths who was eventually acquitted of harboring immigrants.

No More Deaths is a faith-based group that formed in 2004 in response to a large number of migrants who were dying while attempting to cross the brutal Sonoran Desert. Dramatically increased enforcement and deterrent tactics that began in the mid 1990s, along with the increasingly limited ways in which someone could legally migrate to the U.S., resulted in tens of thousands of people dying while trying to cross through treacherous and dangerously hot desert areas where they were less likely to be detected.

No More Deaths has two aid camps in Arizona, and volunteers leave water jugs and lead search and rescue or recovery operations in the desert.

Their work and the work of other humanitarian groups around the world has increasingly come under attack as nationalistic and xenophobic viewpoints become more prevalent, experts say.

Even after years of coexisting with the Border Patrol mostly peacefully, No More Deaths has seen its water jugs destroyed by border agents, and several of its volunteers have faced federal charges. The Border Patrol also executed a search warrant at the camp near Arivaca, Arizona, on July 31.

A makeshift camp intended to offer humanitarian aid in southern Arizona was raided by Border Patrol on July 31.

Paige Corich-Kleim, a volunteer who was present on Monday, said agents destroyed much of the camp’s infrastructure, including a window to a locked office and dishes. A low-flying helicopter also caused several tarps to blow over, and a storage shed was ripped apart, Corich-Kleim said. She described the raid as “violent.”

The U.S. Border Patrol declined to answer questions from The Associated Press.

In several tweets, however, Tucson Sector Chief Roy D. Villareal said that agents had executed a warrant at the No More Deaths camp near Arivaca and that the group was harboring immigrants “with unknown health status.” He said some of the immigrants were wearing camouflage.

Calling it a “so called Samaritan camp,” Villareal added: “Huge risk to themselves, our communities, and our country.”

Corich-Kleim said seven volunteers were who were on site were detained for several hours but were not criminally charged. She said the camp helps migrants who are often dehydrated or have severe blisters from walking so much.

“We have tried to keep open relationships and open communication with Border Patrol but have seen a dramatic shift in their enforcement tactics over the last few years,” Corich Kleim said. She added that although the group previously had written and verbal agreements with the agency that allowed them to carry out their work, there hasn’t been an agreement in place for a while.

“Part of what protects humanitarian workers at the border is their citizenship, and for the most part, they’re not under the purview of the Border Patrol,” said Bijal Shah, associate professor of law at the Sandra Day O’Connor College of Law, at Arizona State University. Shah said the Border Patrol appears to be crossing lines it hasn’t before — targeting not just non-citizens for immigration violations, but citizens for carrying out aid.

Scott Warren, whose case galvanized international support, was first tried in June 2019 for helping two Central American men who had crossed the border illegally. A jury deadlocked on charges, but the government went forward with a second trial. Warren was acquitted a year ago.

Rachel Gore Freed, the vice president and chief program officer for the Unitarian Universalist Service Committee, said the pattern of criminalizing humanitarian work is a global phenomenon and has grown over the last few years as nationalistic views have risen.

“I think racism and xenophobia and scarcity mentality kind of dictate why there’s so much attention to our southern border,” Freed said. Her group partners with No More Deaths.

Corich-Kleim, the volunteer, said No More Deaths will continue to carry out its work.

“I think we don’t really have a choice. As long as there is a need, we’re gonna try our best to be there and help folks,” she said.

An activist was quickly acquitted Wednesday on charges he illegally harbored two Central American immigrants at a southern Arizona camp operated by a humanitarian group.