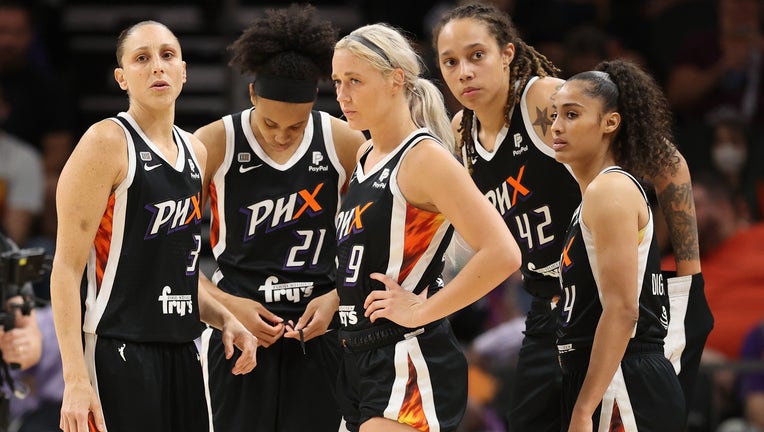 MOSCOW - Brittney Griner can’t play with her WNBA colleagues. She can’t call them, either.

But she can write.

In one small bit of normalcy, Griner has been able to receive emails and letters from WNBA players during her detainment in Russia. Hundreds of emails have been sent by players to an account Griner’s agent set up to allow them to communicate with her.

It’s not easy: The emails are printed out and delivered sporadically in bunches to Griner by her lawyer after they are vetted by Russian officials. Griner doesn’t have access to the email account; she’ll either write a response on paper and her lawyers will take a photo of it or she’ll dictate a response if she doesn’t have any paper.

Los Angeles Sparks forward Amanda Zahui B. never thought she’d hear back from Griner when she sent an email to the Phoenix Mercury center a few months ago.

Like so many WNBA players, Zahui B. wanted Griner to know she was thinking about her as the two-time Olympic gold medalist remains, in the view of U.S. officials, wrongfully detained in Russia.

Griner has been detained for 105 days after vape cartridges containing oil derived from cannabis were allegedly found in her luggage at an airport near Moscow.

When Zahui B. got her first response from Griner it made her smile and she promised herself she would send more notes. And she has, sending them every few weeks. So have many other players.

It’s not just emails being sent to Griner; Diana Taurasi actually sent a hand-written letter to her Mercury and Olympic teammate.

Griner’s agent Lindsay Kagawa Colas said the letters have been a way for the 6-foot-9 center to stay connected to her WNBA family.

Some players just offer hopes and prayers for Griner’s release and say they are thinking about her. Others send Sudoku puzzles or more personal notes.

"She jokes in her letters. I don’t know how she does it with what she’s going through. She’s an amazing soul," Zahui B. said. "She brings light in a situation like this. I don’t think a lot of people could manage to do that."

Zahui B., who jokingly admitted she tends to ramble, sent Griner updates on her daily activities describing such mundane things as getting her nails done or what she ate for lunch.

She wasn’t extremely close with Griner when they both played in the WNBA and in Europe, but got to know her better over time. Griner sent a video to Zahui B,’s mom offering support when she was battling breast cancer and another one for her 60th birthday a few years ago.

Griner, who last responded to the Sparks player last week, signed it "From 42 to 42" when Zahui B. told her she was switching her number to 42 in honor of the center.

While writing letters has come naturally to Zahui B., other players says it is tough to find the words to put pen to paper.

Griner faces drug smuggling charges that carry a maximum penalty of 10 years in prison. Another American regarded as unjustly detained in Russia is Paul Whelan, a corporate security executive from Michigan. Whelan was arrested in December 2018 while visiting for a friend’s wedding and was later sentenced to 16 years in prison on espionage-related charges his family has said are unfounded.

Marine veteran Trevor Reed, who also had been jailed in Russia for nearly three years, was released in late April as part of an unexpected prisoner exchange involving a convicted Russian drug trafficker serving a long prison sentence in America.

Last month, the Biden administration said Griner, 31, is being wrongfully detained. In May, her detention was extended another month until at least the middle of June.

Williams said the union has sent out texts every couple of weeks to remind WNBA players they can reach out to Griner through the email account. For now, the account isn’t open to the public in an effort to keep it manageable.

New York Liberty’s Sandy Brondello, who coached Griner in Phoenix for nine seasons, just found out about the chance to email her former player a few days ago.

"I’m going to tell her that I love her and that I’m thinking about her," said an emotional Brondello. "That’s my girl, it’s terrible. She’s been there too long."