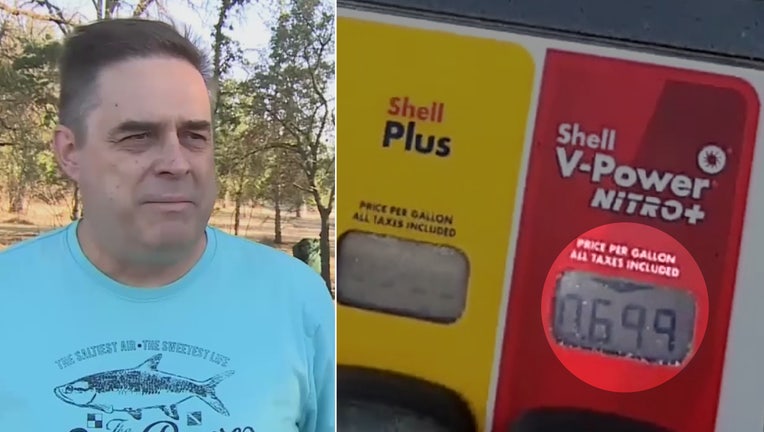 Gas station manager John Szczecina was fired after accidentally setting the price for fuel to 69 cents a gallon instead of $6.99. (Photos courtesy: KOVR-TV, left/@sac_og_d via Instagram, right)

RANCHO CORDOVA, Calif. - A gas station manager in California is out of a job after he mistakenly set his pumps to just 69 cents a gallon instead of $6.99.

John Szczecina was working at a Shell gas station in Rancho Cordova on Friday when he said he accidentally put a decimal in the wrong spot, causing pumps to sell premium gasoline for just 69 cents.

Word began to spread on social media, and lines began to form as people hurried to take advantage before the error was fixed.

"I put all three prices on there except the diesel, but the last one kind of didn't go, you know, right," Szczecina told KOVR-TV. "It was a mistake that I did, you know."

RELATED: Why a Northern California gas station is charging nearly $10 a gallon

That mistake cost the gas station $16,000 – and it cost Szczecina his job.

His family started a GoFundMe page for him, hoping to raise the $16,000 the gas station lost so they could pay it back.

They are worried that Szczecina could be sued for his mistake – but business attorney Craig Simmermon told KVOR that employees are protected from liability when they make mistakes while performing normal duties related to their jobs.

READ: GEICO ordered to pay $5.2M to woman over claims she caught STD during sex in car

"The only way he would be responsible outside of a written agreement is if he was acting outside the scope of his employment," Simmermon said. "For instance, if his boss said, ‘Whatever you do, don’t ever set the price on that gas pump,’ and then he did."

In the meantime, the former gas station manager says he's now on the hunt for a new job.