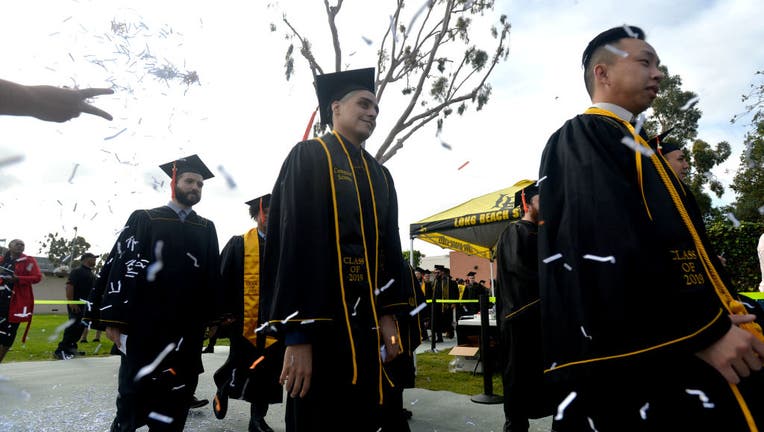 LONG BEACH, CA - MAY 21: Engineering students march into their graduation ceremony under a cloud of confetti at Cal State University Long Beach in Long Beach on Tuesday, May 21, 2019. Ceremonies for various classes will be taking place on campus all

If approved, it would be the first change to the school’s general education curriculum in over 40 years and would come amid the national uproar over racism and police brutality.

Meanwhile, the state Legislature is on the verge of passing a bill with its own defined rules for ethnic studies that would overrule school leaders, opening a debate on whether lawmakers should wade into academia.

If the bill is eventually signed by the governor, “everything we’re doing regarding the new proposal is moot,” Douglas Faigin, a trustee on the board, said during hours of discussion at a Tuesday meeting.

Trustees backing California State University’s proposed ethnic studies plan said it allows students to choose from a wider array of ethnic studies topics to fulfill the course requirement than the Legislature’s bill. Trustees said their proposal also spells out that students can take courses on social justice that explore issues such as the criminal justice system and public health disparities.

A committee passed the plan Tuesday and sent it to the full board of trustees. The proposal took six years to develop.

Board members agreed on the need for more ethnic studies, particularly after the police killing of George Floyd in Minneapolis and the national uproar over racism. But many said allowing politicians to dictate university courses crosses a line.

The Assembly has to review minor amendments after the Senate passed it last month. It also would need the approval of Gov. Gavin Newsom.

The bill would require California State University campuses starting in the 2021-2022 academic year to offer courses on race and ethnicity focusing on Native Americans, African Americans, Asian Americans and Latina and Latino Americans. Students would need to take a three-credit course to graduate.

The university system’s proposal would take effect in the 2023-2023 academic year and offers a greater selection of topics than the Legislature’s bill, which critics said does not include some courses such as Jewish studies. The university’s plan would cost $3 to $4 million while the bill is estimated to need $16 million for implementation.

As chair of the Legislative Black Caucus, Weber wrote to the board to stand down on its proposal. The legislation was prompted, she wrote, because the university was too slow on implementing a requirement after announcing ethnic studies plans almost five years ago.

She noted the California Faculty Association supports her bill. The association, which represents 29,000 faculty members at California State University, has said the university’s proposal is overly broad, allowing classes on social justice when the aim should be teaching students about the experiences of minorities and people of color in the U.S.

Weber wrote that the school’s recommendation "does not respond to the challenges we currently face, has been rejected by the faculty, and is not supported by students."