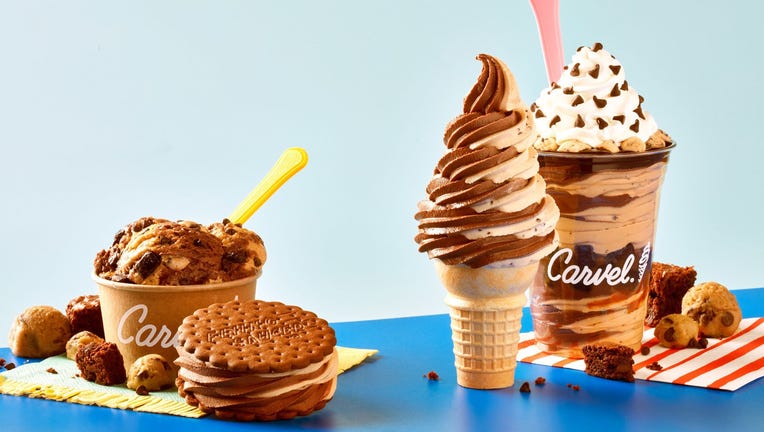 ATLANTA - Carvel is giving ice cream fans the "best of both swirls" by adding a new "Brookie" flavor to its menu and offering a buy one, get one deal in celebration of National Ice Cream Day.

The Atlanta-based chain recently debuted the new mix of fudgy brownie batter and chocolate chip cookie dough, a flavor which is now available as soft serve, scooped ice cream, in a shake, and even in one of Carvel’s Flying Saucer chocolate wafers.

As part of Carvel’s National Ice Cream Day celebration on Sunday, July 17, customers can also get a buy one, get one free offer on a small cup or cone of any Carvel soft-serve flavor, including the Brookie.

Jessica Osborne, Carvel’s vice president of marketing, noted how ice cream is often part of the "fond memories" of summer.

"With literal new twists on flavors that remind them of childhood, our fans can reminisce on those moments while creating new summer traditions and CARVELebrating special occasions," Osborne said in a statement announcing the new flavor and BOGO deal.

Other brands have made headlines in recent days for special foodie deals and discounts. Krispy Kreme is celebrating its upcoming 85h birthday with a giveaway that offers a dozen free doughnuts each month for a year, as well as a special day in July where fans can get an Original Glazed dozen for just 85 cents.

Subway also recently debuted the "most significant menu update in its nearly 60-year history" and is offering up to 1 million free sandwiches across the U.S. on July 12 to celebrate.