LOS ANGELES - Jamie Foxx stood shoulder-to-shoulder with activists in Minneapolis, proclaiming that “we’re not afraid of the moment.” In Los Angeles, pop star Halsey and “Insecure” actor Kendrick Sampson were hit with rubber bullets during a tense stand-off. And in Chicago, John Cusack was filming a burning car when officers rushed up to him and began screaming at him to leave, and he says, hitting his bike.

Across the U.S., many celebrities have been doing far more than tweeting supportive words or issuing carefully prepared statements. They took to the streets alongside thousands of people to condemn the killings of black people at the hands of police and to demand reform.

“I was there in LA when it was the Rodney King beating and I watched that, and I said ‘Man, if they get away with this what’s going to happen later?’ And it continues to happen,” Foxx said Monday in San Francisco, where he joined church leaders and activists in a “kneel-in.” 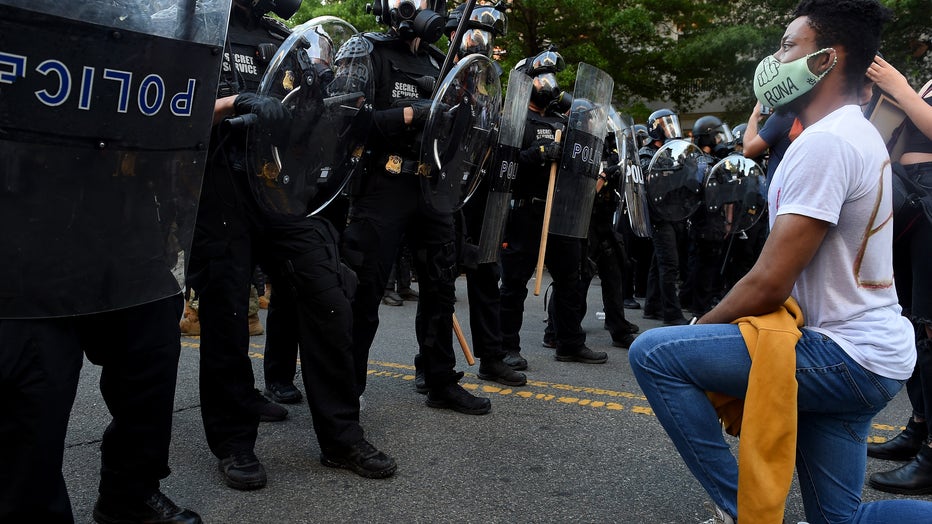 FILE - A protester kneels in front of a row of police during a demonstration against the death of George Floyd at a park near the White House on June 1, 2020 in Washington, DC. (Photo by OLIVIER DOULIERY/AFP via Getty Images)

Foxx's comments came three days after he flew to Minneapolis to join the chorus of anger over the death of George Floyd, a black man who died after being pinned under the knee of a white Minneapolis police officer for several minutes even after he became unresponsive.

Many celebrities turned out Saturday and Sunday at sometimes intense protests in Los Angeles, including one outside a popular, high-end shopping mall where protesters took over a city bus, tagged buildings and burned police cars. Model and activist Emily Ratajkowski waved a sign that read “Dismantle power structures of oppression,” Paris Jackson carried one that said “Peace Love Justice” and rapper Machine Gun Kelly ’s said, “Silence is betrayal.” Pop star Ariana Grande tweeted that “we chanted, people beeped and cheered along.”

Sampson (“Insecure,” “How to Get Away With Murder”) on Saturday grabbed a microphone.

“Our solutions are not defined by systems that oppression built!” he shouted. “America was founded on racism, anti-blackness and genocide. When you talk about America, don’t leave that s--- out.”

Later Sampson was shown at the front of a standoff with police. Some of the details of the video aren’t clear, but Sampson said on Instagram that a rubber bullet that police shot into the ground ricocheted and hit his assistant. The video shows Sampson step in front of his assistant and an officer hit him at least twice with a baton.

“Then an officer aims straight at me, no ricochet, and shoots (rubber bullets)” Sampson wrote. “That was one of seven shots I took. They are excruciating. And they CAN kill.”

Nearby, Halsey, who was at the protest with ex-boyfriend and recording artist Yungblud, also reported being hit with rubber bullets and getting tear-gassed.

“We were peaceful. Hands up, not moving, not breaching the line,” she wrote on Instagram. “They opened fire of rubber bullets and tear gas multiple times on U.S. citizens who were not provoking them.”

Los Angeles police did not respond to a request for comment about their actions at the scene.

Halsey was back out protesting Sunday in nearby Santa Monica, where many demonstrators acted peacefully but others continued a third day of looting in the Los Angeles area.

“I was just tear gassed,” she wrote. “They are arresting everyone and tear gassing all crowds.”

Among the hundreds arrested at that mostly peaceful demonstration was “Riverdale” actor Cole Sprouse, who wrote on Instagram that “this is precisely the time to contemplate what it means to stand as an ally.”

“I hope others in my position do, as well,” he said.

While some celebrities chose to demonstrate, others took to social media to express their disapproval of looting.

“Everyone is angry but there is a way to direct that anger,” actor/director Taika Waititi wrote on Twitter on Saturday. In another tweet, he wrote: “The police seem to be enjoying this. You’re inciting the chaos, dudes!"

After peaceful protests turned violent in Atlanta on Friday, director Tyler Perry pleaded on Instagram to “please stop this violence!”

“It is your duty not to burn your own house down for anger with an enemy,” he said, adding that he has a lot of love and respect for police while also acknowledging that some of them have done “horrendous” things.

On Monday, Perry posted on Instagram that he personally spoke with George Floyd's immediate family, and that “'they are adamant in their call for peaceful protest.”

In San Francisco, Foxx urged more of his fellow celebrities to step up.

“What I want to say about my Hollywood friends, you’ve got to get out here,” he said. “You can’t sit back, you can’t tweet, you can’t text ... When you hear and when you see how people are hurting, you can understand what it is as opposed to being in your bedroom or your living room and saying, ‘Hey I don’t like this.’ Get out of the cul-de-sac and come down here on the courtroom steps.”

Tank joined Foxx and sang a powerful rendition of Sam Cooke’s “A Change is Gonna Come.”