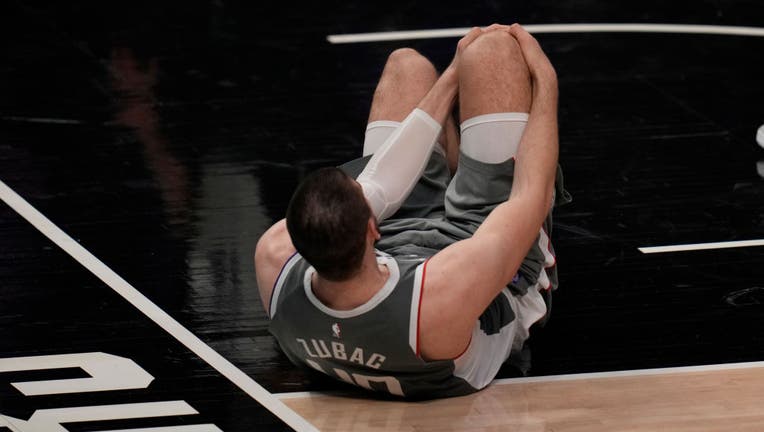 Los Angeles, CA - June 26: Ivica Zubac #40 of the LA Clippers holds his knee after being fouled by Deandre Ayton #22 of the Phoenix Suns in the second half of game four of a Western Conference finals NBA playoff basketball game at the Staples Center (Getty Images)

LOS ANGELES - Hours before tip-off of Game 5 of the Western Conference Finals, it was announced center Ivica Zubac was listed as questionable in the must-win game for the Los Angeles Clippers. Moments later, he was ruled out of the lineup due to a sprained MCL.

Zubac was a crucial part of the Clippers’ Game 3 win with 16 rebounds, 2 blocks, and 15 points.

With Zubac unable to play, it means guaranteed playtime for DeMarcus Cousins and more time for Nico Batum as the fatigued Clippers are running out of options with multiple injuries.

The Clippers are down 3-1 in the best-of-seven series after a frustrating Game 4 loss at Staples Center on Saturday night.

Los Angeles, who advanced to their first West finals in franchise history, is up against a healthy Phoenix Suns squad on their home court.

The injuries have forced head coach Tyronne Lue to be creative with his rotations.

Center Serge Ibaka has missed every playoff game due to a back injury he recently had surgery for and Marcus Morris Sr. continues to battle a knee injury, which has limited his time on the floor. Perhaps the biggest obstacle of all has been navigating around the absence of two-time NBA Finals MVP Kawhi Leonard who has yet to return after suffering a right knee strain during Game 4 of the Western Conference semifinals against the Utah Jazz.

The Clippers organization has remained mum on the severity of the NBA superstar's injury.

Leonard's absence has placed even more pressure on NBA All-Star Paul George who has faced heavy scrutiny for his playoff performances and has been taunted by critics as "Pandemic P," instead of his nickname, "Playoff P."

Still, the team has prevailed against the odds with some remarkable offensive performances from Reggie Jackson and Terance Mann. In addition, Patrick Beverly has done incredible defensive work on Phoenix’s lethal shooter, Devin Booker.

SERIES AT A GLANCE