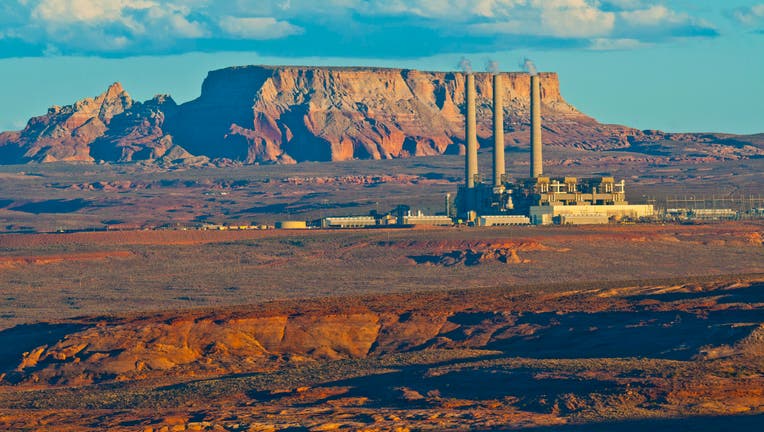 ALONG THE BLACK MESA AND LAKE POWELL RAILROAD, Ariz. (AP) - Ron Little nestles into a familiar seat aboard a train locomotive and slides the window open, leaning out to get a better view of dozens of rail cars that stretch for a mile behind and the landscape he knows so well.

The heavy steel wheels roll along a dizzying pattern of concrete railroad ties that snake through sandstone formations, boulder-laden arroyos and grasslands. Little points to a rock formation named for the reddish dirt that Navajos use to dye wool for rugs and another with a cutout like the handle of a milk jug.

“It’s beautiful scenery you just go live with every day,” he said.

Every day until recently, when the last of the trains he’s operated for more than half his life pulled up to a power plant with thousands of tons of coal.

Before the year ends, the Navajo Generating Station near the Arizona-Utah border will close and others in the region are on track to shut down or reduce their output in the next few years. Its owners are turning to cheaper power produced by natural gas as they and other coal-fired plants in the U.S. face growing pressure over contributing to climate change.

Those shifts are upending people’s livelihoods, including hundreds of mostly Native American workers who mined the coal on tribal land, loaded it from a roadside silo and helped produce the electricity that has powered the American Southwest since the 1970s.

Two tribes each will lose millions of dollars in income, while workers like Little are forced into early retirement. Some employees will stay on to restore the land, while others aren’t sure what’s next.

Ted Candelaria, a fourth-generation railroader who voted for President Donald Trump in hopes he would be coal’s saving grace, said the change is bittersweet.

“I got all emotional, started tearing up. It’s kind of sad because I love what I do,” Candelaria said from the driver’s seat of his pickup truck, looking toward a line of locomotives. “Where else does a guy get to come to work and ride on an electric train?”

The Black Mesa and Lake Powell Railroad was one of only three 50-kilovolt electric lines in the world. The rail yard boasted some rarities, including a 1976 locomotive with a faded blue body and a rusty red front end that led the final journey from the coal silos to the power plant in late August, effectively shutting down the mine that fed it.

The power plant was built in the late 1960s on land leased from the Navajo Nation, one of two coal-mining Native American tribes that has the largest land base, spanning parts of Arizona, New Mexico and Utah.

The plant was a compromise to keep more hydroelectric dams from being built through the Grand Canyon and to power a series of canals that deliver water to Arizona’s major cities, allowing them to grow. At the time, the U.S. was facing a natural gas shortage and utilities turned to coal to feed the electric grid.

Now, utilities increasingly are shifting to renewable energy, setting standards to wean themselves off coal, an industry Trump has tried to prop up. The country gets about 25% of its electricity from coal-fired plants, down from 40% five years ago, according to the U.S. Energy Information Administration.

Two other coal-fired plants operate on or near the Navajo Nation in northwestern New Mexico and have a majority Navajo workforce. The San Juan Generating Station is slated to close in 2022, and the nearby Four Corners Power Plant by 2038.

One unit at the Navajo Generating Station in Arizona shut down in September. Decommissioning the other two is expected to take two years, with the smokestacks coming down in 2020.

The coal reserves are vast beneath the land belonging to the Navajo Nation and the neighboring Hopi Tribe. The plant has burned 24,000 tons of coal a day for nearly 50 years, and the Navajo Nation estimates it still has a 100-year supply.

Without extending the rail line beyond the 78 miles (126 kilometers) between the power plant and the silos at the Kayenta Mine, the coal has nowhere to go.

“It’s disappointing to us,” said Randy Lehn, the mine’s acting general manager. “We tried harder than anyone else to try to keep this thing going.”

Peabody Energy, which owned the mine, launched a bid to save the Navajo Generating Station last year with rallies, ads and a “Yes to NGS” campaign. Residents of the Navajo community of LeChee, closest to the plant, wrote to Trump asking for help.

It didn’t work. The Navajo Nation and the Hopi Tribe now are hard-pressed to come up with a way to make up for the losses, including money for student scholarships and road maintenance.

The Hopi Tribe is losing $14 million a year in coal revenue, or 82% of its general budget that pays for human resources, information technology and financial staff, court programs and legal counsel. More than $3 million goes to Hopi villages.

Tribal members who gathered coal from the mine to heat their homes or used it for ceremonial fires will have to look elsewhere, a similar concern for thousands of Navajos.

″(It’s) the main concern right now because we’re in that part of the season of the year now,” Hopi Vice Chairman Clark Tenakhongva said. “Religious are finally realizing: ‘What are we going to do for heating? How are we going to survive from here on out?’”

The Hopi Tribe plans to cut government services where it can, possibly switching workers to a four-day workweek.

“Everybody is concerned as far as what the future looks like,” Tenakhongva said.

Economic development is difficult for the Hopi Tribe, which is landlocked by the much-larger Navajo Nation and doesn’t get as much tourist traffic. Hopi officials plan to lobby Congress for funding and to fulfill what it says are land obligations to the tribe.

At the height, mining operations in the region employed 700 mostly Native American workers. The power plant had more than 500 employees, 90% of whom were Navajo.

Navajo President Jonathan Nez said the tribe will lose between $40 million and $50 million annually from coal revenue and lease payments — money being replaced temporarily with interest from a trust fund it developed in 1985 to replenish lost revenue from coal, timber, gas and oil.

The interest is enough to cover the losses each year, but the tribe would have to consider approving that method in budget talks going forward.

Mine and power plant workers are being encouraged to start their own businesses and bid on tribal projects, Nez said. His administration also has encouraged members to spend their money on the reservation.

Tourism, solar plants, a call center and manufacturing facilities could help make up lost revenue, tribal officials said, but no single venture will replace the money coal brought in.

“There is potential for a lot more as far as diversification when we look at renewable energy as well as our enterprises of the Navajo Nation that pay back funds to the Navajo Nation,” tribal economic development director J.T. Willie said.

The tribe will have access to the transmission lines that carried power from the plant to customers in the U.S. West and will keep a warehouse, offices and the train tracks, which Willie said could be used for tourism or sold.

Gerald Clitso, sitting in the control booth of a coal silo above the railway recently, is not convinced he would have as lucrative of a job opportunity elsewhere in the Navajo Nation.

“Our leadership, they just don’t have the vision, the foresight to see into the future to see what can sustain our economic conditions here on the Navajo reservation,” he said. “With the plant going down and the coal mine going down, we’ll end up going back to the days of using Coleman lanterns.”

He peered through a window above the train that slowly rolled into the towering concrete silo along U.S. 160, his fingers jostling the controls that fill each car with 1,000 tons of coal delivered from the mine 18 miles (29 kilometers) away.

Behind him, Navajo workers talked about lost money for scholarships that helped with school and about the relationships formed over decades of working together, reminiscing about exchanging grilled mutton for fried chicken with other people at the silo.

The same conversations are happening along the railroad and at the power plant in Page, where a trio of concrete stacks rise 755 feet (236 meters) above the desert, lights flashing to warn planes.

The plant isn’t far from popular tourist attractions like Antelope Canyon, Lake Powell and Horseshoe Bend, where the bluish-green water of the Colorado River takes a 270-degree turn.

Lyle Dimbatt, a former Page mayor who grew up there with other power plant employees, said the region still will benefit from tourism, but the economy will take a hit from losing the power plant and mine.

Dimbatt, who is not Native American, still has one kid in school and isn’t ready to leave his job as the nighttime train supervisor.

“If I’m honest with you, I’m not happy about it, but can’t do nothing about it,” Dimbatt said, shrugging. “I’m just glad I’m not walking out of the door with nothing, because some of them are.”

Over half the workers at the mine qualified for retirement, said Lehn, the general manager. A few will stay for cleanup work. The others are out of jobs.

Phoenix-based Salt River Project, majority owner and operator of the power plant, has offered transfers to employees who want them, but that means leaving the reservation.

Schoolchildren would rather not move to a bigger city where they have no family, friends and few open spaces, Pauline Begay said from her office at the LeChee Chapter, a local government of the Navajo Nation, within view of the power plant.

For Little, he will miss the paycheck that helped put his kids through college. He rose from utility man to train operator, passing up the chance to be a supervisor because he liked the serenity aboard the train.

The locomotives and train cars are destined for the scrap pile.