What happened in the Colonial Pipeline ransomware attack

Colonial Pipeline, the operator of a major pipeline system that transports fuel across the East Coast said it had been victimized by a ransomware attack and had halted all pipeline operations to deal with the threat.

Colonial Pipeline said Wednesday it has restarted operations after being hit by a cyberattack last week, leading to long lines at gas stations in the Southeast, but said it will take "several days" for its delivery supply chain to return to normal.

The pipeline, which delivers about 45% of the East Coast's gas, suffered a ransomware attack — leading to distribution problems and panic-buying, draining supplies at thousands of gas stations.

"Colonial Pipeline initiated the restart of pipeline operations today at approximately 5 p.m. ET. Following this restart, it will take several days for the product delivery supply chain to return to normal," the company said in a statement. "Some markets served by Colonial Pipeline may experience, or continue to experience, intermittent service interruptions during the start-up period."

"Colonial will move as much gasoline, diesel, and jet fuel as is safely possible and will continue to do so until markets return to normal," the statement continued.

Colonial Pipeline, headquartered in Alpharetta, Georgia, had restored some fuel delivery Tuesday, but the main artery of the pipeline had remained shut down. It plays a key role in transporting gasoline, jet fuel, diesel and other petroleum products from Texas all the way to the Northeast.

Government officials and energy analysts have stressed that there is no gasoline shortage. But there is a problem getting the fuel from refineries on the Gulf Coast to the states that need it, and officials have been scrambling to find alternate routes to deliver that fuel.

Speaking prior to the announcement, President Joe Biden had signaled some relief could be coming.

"I think you’re going to hear some good news in the next 24 hours and I think we’ll be getting that under control," he said during a COVID-19 briefing.

The Biden Administration green-lit some states to use highways to transport overweight loads of gasoline and other fuels amid the shutdown. To help alleviate potential shortages, the Environmental Protection Agency also waived some fuel quality requirements on an emergency basis in parts of Washington D.C., Maryland, Pennsylvania and Virginia.

At the state level, the governors of Florida, Virginia and North Carolina each declared a state of emergency this week to help ensure a sufficient supply of fuel following the cyberattack. They noted their states’ heavy reliance on the pipeline.

On Wednesday, the U.S. Consumer Product Safety Commission tweeted a reminder not to fill plastic bags with gasoline.

"We know this sounds simple, but when people get desperate they stop thinking clearly. They take risks that can have deadly consequences. If you know someone who is thinking about bringing a container now meant for fuel to get gas, please let them know it’s dangerous," the agency wrote.

Though experts maintain unnecessarily buying gas amid the pipeline outage will make the situation worse.

"If you don't IMMEDIATELY need gas, our experts recommend you don't fill up. A surge in demand only makes the situation worse," GasBuddy wrote on Twitter. 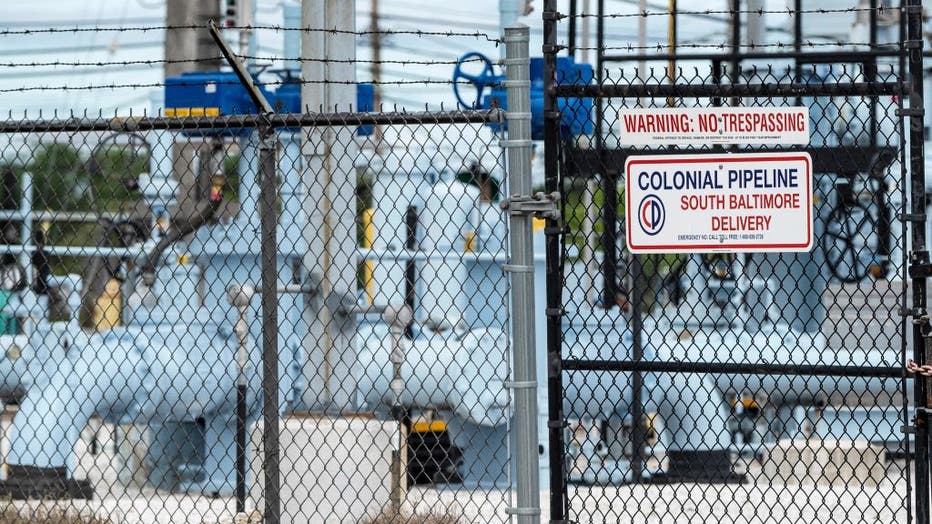 A sign is seen at Colonial Pipeline Baltimore Delivery in Baltimore, Maryland on May 10, 2021. - The US government declared a regional emergency Son May 9, 2021 as the largest fuel pipeline system in the United States remained largely shut down, two

The Colonial Pipeline carries jet fuel as well. American Airlines rerouted two long-haul flights from Charlotte, North Carolina, because of possible shortages. Passengers flying to Honolulu will have to change planes in Dallas, and those heading to London will stop in Boston to refuel.

Southwest and United flights carried extra fuel on flights to Nashville, Tennessee, Baltimore and some other airports in case jet fuel was unavailable at those airports. Normally airlines load only enough fuel for a single flight, because topping off adds to the plane’s weight and hurts mileage. Most planes can carry enough fuel for a round trip, but the extra fuel burn costs money.

The FBI on Monday named DarkSide as the criminal syndicate whose ransomware was used. The group's members are Russian speakers, and the syndicate’s malware is coded not to attack networks using Russian-language keyboards. Russia, however, denied any involvement in the attack.

Ransomware scrambles data that can only be decoded with a software key after the victim pays off the criminal perpetrators. Hospitals, schools, police departments and state and local governments are regularly hit.

Such attacks are difficult to stop in part because they’re usually launched by criminal syndicates that enjoy safe harbor abroad, mostly in former Soviet states. An epidemic of ransomware attacks has gotten so bad that Biden administration officials recently deemed them a national security threat.

Experts say the attack on the Colonial Pipeline also underscored the vulnerabilities of the nation's energy sector, and other critical industries whose infrastructure is largely privately owned.