Dozens of people were killed and many remained without heat and water in Kentucky after a swarm of tornadoes tore through several U.S. states on Friday night, leveling hundreds of homes and businesses.

Kentucky was the worst-hit state by far, coming at a time of year when cold weather normally limits tornadoes. At least 64 people died in Kentucky across eight counties, Gov. Andy Beshear said Monday. There were at least another 14 deaths in Illinois, Tennessee, Arkansas and Missouri.

President Joe Biden received a briefing earlier Monday with homeland security and disaster response officials in the Oval Office to discuss what more the federal government can do to support those affected by the natural disaster. The president planned to travel Wednesday to Kentucky to view survey the damage.

Biden said he was developing the itinerary in consultation with local officials to ensure that his presence doesn't distract from the ongoing emergency response.

RELATED: How to help tornado victims in Kentucky, other states

Meanwhile, authorities were still trying to pin down the full death toll, though they believed it to be lower than initially feared since it appeared many more people escaped a candle factory in Mayfield, Kentucky than first thought.

Beshear said the storms made door-to-door searches impossible in some places, adding Monday that at least 105 remained unaccounted for in the state.

Four twisters hit the state in total, including one with an extraordinarily long path of about 200 miles, officials said. Over the weekend, Beshear had said that the state’s toll could exceed 100 — but he scaled that back after it appeared fewer people died in the Mayfield Consumer Products candle factory than previously thought.

Initially, as many as 70 people were feared dead in the factory, but the company said Sunday that eight deaths were confirmed and eight people remained missing, while more than 90 others had been located.

"Many of the employees were gathered in the tornado shelter and after the storm was over they left the plant and went to their homes," said Bob Ferguson, a spokesman for the company. "With the power out and no landline they were hard to reach initially. We’re hoping to find more of those eight unaccounted as we try their home residences." 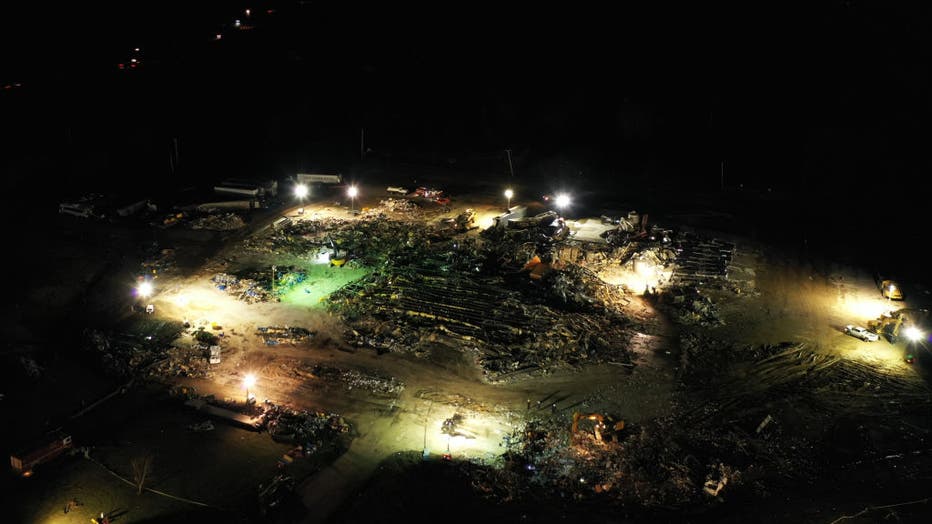 An aerial view of debris and structural damage is seen at the Mayfield Consumer Products candle factory as search and rescue operations were underway after a tornado hit Mayfield, Kentucky on Dec. 12, 2021. (Photo by Tayfun Coskun/Anadolu Agency via

Night-shift workers were in the middle of the holiday rush, cranking out candles when the word went out to seek shelter.

Debris from destroyed buildings and shredded trees covered the ground in Mayfield, a city of about 10,000 in western Kentucky. Twisted sheet metal, downed power lines and wrecked vehicles lined the streets. Windows were blown out and roofs torn off the buildings that were still standing.

Mayfield Mayor Kathy Stewart warned on Monday that residents could be without heat, water and electricity in chilly temperatures for days.

"Our infrastructure is so damaged. We have no running water. Our water tower was lost. Our wastewater management was lost, and there’s no natural gas to the city. So we have nothing to rely on there," she told "CBS Mornings." "So that is purely survival at this point for so many of our people."

Dossett warned that full recovery in the hardest-hit places could take not months, but years.

"This will go on for years to come," he said.

In addition to the deaths in Kentucky, the tornadoes also killed at least six people in Illinois, where an Amazon distribution center in Edwardsville was hit; four in Tennessee; two in Arkansas, where a nursing home was destroyed and the governor said workers shielded residents with their own bodies; and two in Missouri.

Search efforts at the Amazon warehouse were expected to take several days, but authorities said they did not expect to find additional survivors. The damage was extensive; the structure’s steel support pillars were exposed after the walls and roof caved.

"These walls are made out of 11-inch thick concrete, and they’re about 40 feet tall, so a lot of weight from that came down," Edwardsville Fire Chief James Whiteford said.

Both sides of the warehouse used to prepare orders for delivery collapsed inward and the roof caved, Whiteford said.

"This is a devastating tragedy for our Amazon family and our focus is on supporting our employees and partners," Amazon spokesperson Richard Rocha said in a written statement.

The roof was ripped off an Amazon facility in Illinois during a possible tornado. Credit: RiverBender.com via Storyful

The Retail, Wholesale and Department Store Union, which has been trying to organize workers at an Amazon facility in Alabama, criticized the company for keeping the Illinois site open during a weather emergency.

Amazon said that when a site is made aware of a tornado warning, all employees are notified and directed to move to a shelter.

Pope Francis expressed his sadness over the "devastating impact" of the tornadoes. In a telegram sent Monday by Vatican secretary of state, Cardinal Pietro Parolin, the pope offered prayers for those who died, "comfort to those who mourn their loss and strength to all those affected by this immense tragedy."

Victor Gensini, a researcher on extreme weather at Northern Illinois University, said the storm was all the more remarkable because it came in December when normally colder weather limits tornadoes. The longest tornado on record, in March 1925, tracked for about 220 miles through Missouri, Illinois and Indiana.

A woman in New Albany, Indiana, discovered a black-and-white family photo stuck to her car window on Saturday, December 11, after tornadoes tore through Kentucky the day prior. (Credit: Katie Posten via Storyful)

Overall, at least 33 tornadoes were reported across six states, including Arkansas, Missouri, Illinois, Kentucky, Tennessee and Mississippi, according to FOX Weather. The National Weather Service issued 149 tornado warnings through the night.

The 33 reports of tornadoes ranked Dec. 10 as the seventh most active tornado day of the year in the nation, according to FOX Weather meteorologist and Senior Weather Data Specialist Shane Brown. The U.S. averages one tornado report in December.

Brown said eight tornado emergencies — the most life-threatening and extreme tornado warning — were issued Friday. Before the outbreak, there had only been seven such warnings issued in December combined since 1999.