Brock O'Hara shared video of lights moving across the sky in Rio Verde, Arizona during the early morning hours of Sept. 7.

PHOENIX - Residents across the Phoenix metropolitan area woke up to an interesting spectacle early Wednesday morning after a row of lights were seen drifting across the Arizona sky.

The lights were witnessed in areas from Ahwatukee and Chandler to as far north as Chino Valley.

Luckily, there's an explanation - SpaceX's Starlink satellites are in orbit and could be seen over the Phoenix area at around 5 a.m. this morning, according to satellite tracker FindStarlink.com.

Arizonans have reported seeing Starlink satellites several times before. The technology is meant to bring "high-speed, low-latency internet to users all over the world," according to the SpaceX website.

Thousands of the satellites are currently in orbit.

Phoenix residents will get another chance to see the lights in action at around 7:49 p.m. on Sept. 8. 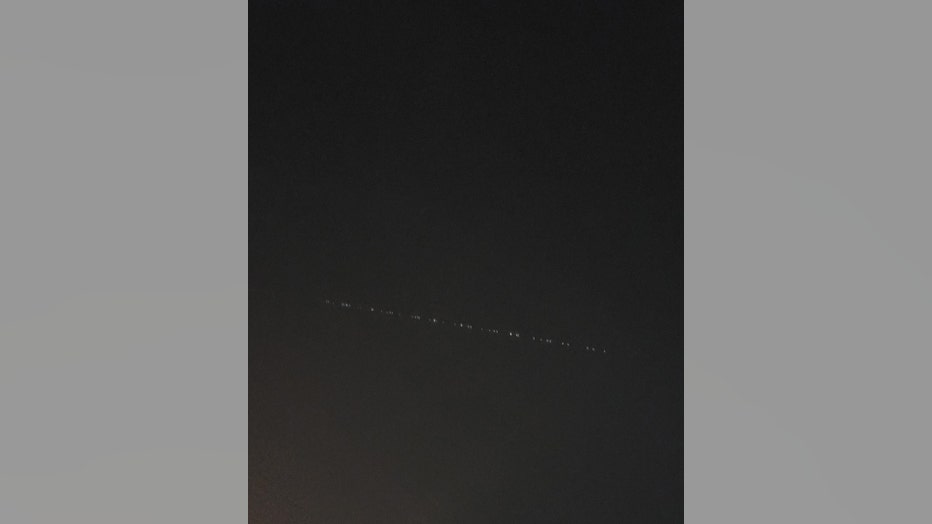 A row of lights were spotted drifting across the Arizona sky on Sept. 7, 2022. (Jesse Patton)

FOX 10 received many calls from people on the night of Dec. 3, 2021, after a string of lights were seen across the night sky of Phoenix. The lights apparently came from a constellation of Starlink satellites.

The technology can provide much-needed internet access in rural areas, but it comes with a dilemma: the satellites are so bright and so numerous, astronomers worry about the future of the night sky.

For many astronomers, a photo taken by Victoria Girgis a few years ago that showed dots moving across the sky was a wakeup call that "satellite constellations" could be a problem.

Jeff Hall, director of Lowell Observatory, said "everyone was caught off guard at how bright the satellites were. Including SpaceX, they were a little taken aback, too, at just how bright they were."

This is the dilemma: how do you get desperately needed internet to rural areas while protecting the night sky?

SpaceX is trying to darken their satellites, and Amazon will put its constellation in a low orbit to keep it out of sunlight for most of the night. These are voluntary actions by the companies, not mandated.

John Barentine of the International Dark Sky Association said there aren’t many rules to regulate space.

"The core of this policy is from a time when the concern was who was going to get to the moon first, was it going to be the US or the Soviets?," said Barentine, referring to the Outer Space Treaty signed in 1967 when only a few dozen satellites had been successfully launched into orbit.

The growing numbers of satellites, Barentine said, is "putting pressure on this need to more clearly define the roles and responsibilities with respect to managing that sense of orbital space as this commons that belongs to all of us."