The Beckwourth Complex Fire, a combination of two lightning-caused fires burning 45 miles north of Lake Tahoe, showed no sign of slowing its rush after doubling in size between July 9-10. Video: Craig Philpott via Storyful

A heatwave continued to blanket the U.S. West Sunday with excessive heat warnings issued for inland and desert areas.

Forecasters warned that much of California would see dangerously hot weekend weather, with highs in triple digits in the Central Valley, mountains, deserts and other inland areas because of strengthening high pressure over the state.

Palm Springs hit a record high temperature of 120 F Saturday. It was the fourth time temperatures have reached 120 degrees so far this year, the Desert Sun reported.

Fresno reached 111 degrees F, just one degree short of the all-time high for the date.

And on Friday, Death Valley National Park recorded a staggering 130 F. If verified, it would be among the hottest temperatures ever measured on the planet.

In addition to the health risks, the heat made it difficult to fight several wildfires in parts of a region struggling with a historic drought tied to climate change.

About 300 miles northwest of the sizzling desert, the largest wildfire of the year in California was raging along the border with Nevada.

The Beckwourth Complex Fire — a combination of two lightning-caused fires burning 45 miles north of Lake Tahoe — showed no sign of slowing its rush after doubling in size between Friday and Saturday. 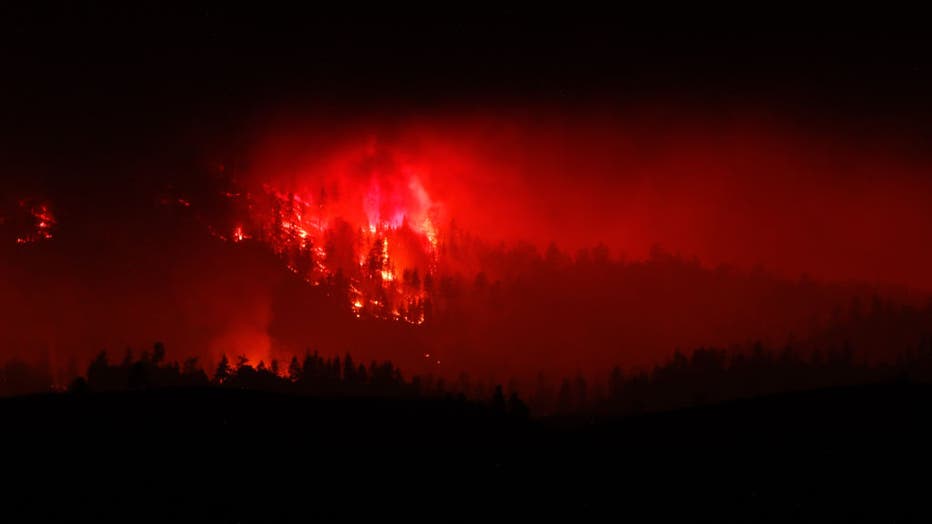 Pushed by strong winds, a wildfire in southern Oregon doubled in size to 120 square miles Saturday.

In north-central Arizona, Yavapai County on Saturday lifted an evacuation warning for Black Canyon City, an unincorporated town 43 miles north of Phoenix, after a fire in nearby mountains no longer posed a threat. In Mohave County, Arizona, two firefighters died Saturday after an aircraft they were in to respond to a small wildfire crashed.

A wildfire in southeast Washington grew to almost 60 square miles as it blackened grass and timber while it moved into the Umatilla National Forest.

And in Idaho, Gov. Brad Little declared a wildfire emergency Friday and mobilized the state’s National Guard to help fight fires sparked after lightning storms swept across the drought-stricken region.