Gas prices are not going up for the reasons shared on social media and in political theater. To put them in context, we have to start before Russia’s war on Ukraine. FOX 13's Craig Patrick explains.

WASHINGTON - Gas prices are not going up because of the Keystone Pipeline cancelation or because the Biden administration paused oil extraction permits. The real reasons are more complicated than that.

Last year, with the U.S. and much of the world shut down for the pandemic, driving and travel cratered – and with it, the demand for oil and gas. Gas prices sharply dropped, so the oil producers cut way back on production.

Then, as the pandemic eased and people who had saved up their money were hungry to travel after being pent up for so long, demand shot way up. But it takes time to ramp back up production and supply.

So crude oil, which had dropped to $30 a barrel during the pandemic, shot up to $80 per barrel. 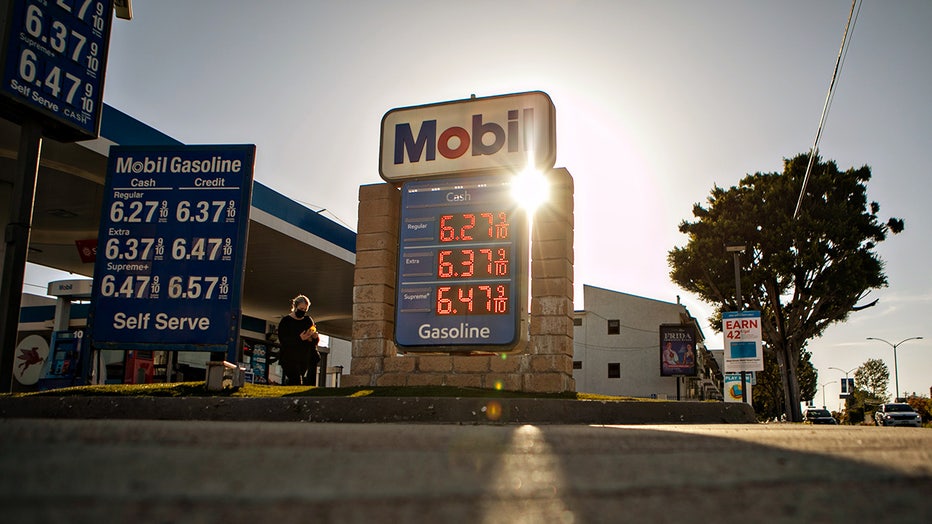 As 2022 arrived, oil prices continued to rise during the run-up to the invasion of Ukraine, with fears that Russia, as one of the world’s largest oil producers, would disrupt the market. And they’ve remained high as the invasion led to global sanctions.

Some Republicans also blame rising gas prices on President Biden for canceling the Keystone XL pipeline extension, and for pausing new permits for extraction on public land. But neither one of things have any direct bearing on the rising gas prices we’re seeing today.

The Keystone Pipeline and oil prices 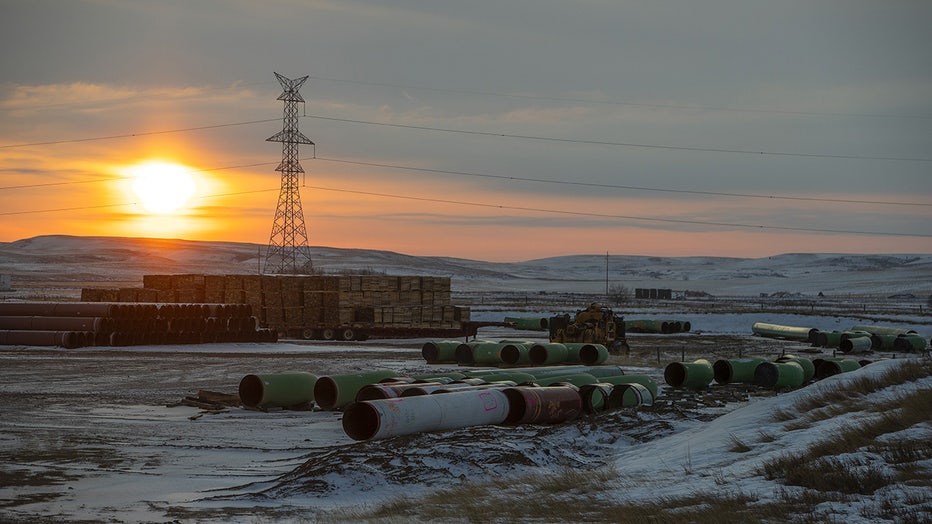 Pipes for the Keystone XL pipeline stacked in a yard near Oyen, Alberta, Canada, on Tuesday, Jan. 26, 2021. (Jason Franson/Bloomberg via Getty Images)

The Keystone Pipeline extension would have funneled more Canadian oil to refineries on the Gulf Coast of Texas, where much of the refined oil would then be exported. But the pipeline extension was never built; its parent company canceled the project after President Biden revoked its permits in one of his first actions after taking office.

According to TC Energy’s official announcement from 2020, the pipeline was not expected to enter service until 2023 – meaning even if Biden had not canceled it, it still would not have been in play this year. 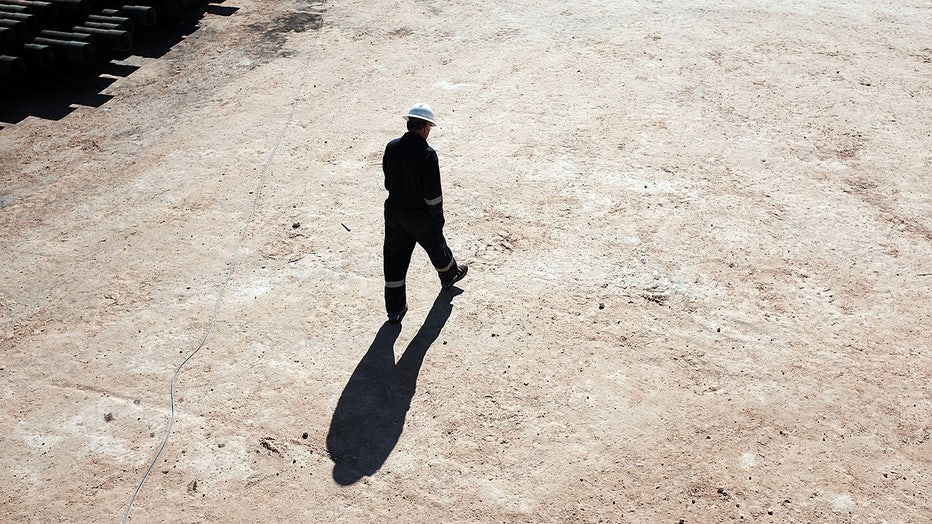 A worker is viewed at the Patterson 298 natural gas fueled drilling rig on land in the Permian Basin on February 5, 2015 in Mentone, Texas. (Photo by Spencer Platt/Getty Images)

President Biden did pause new oil extraction permits on public land, but while doing so, he also still managed to approve more permits than President Trump did a year into his term.

Progressive organizations even called him out for that, as in one report from Public Citizen titled "Biden’s Oil Letdown: Despite pledge to stop drilling on public lands, Trump-era drilling boom continues under Biden."

"Even amid the pandemic, companies in the United States pumped more oil during my first year in office than they did during my predecessor’s first year," Biden has noted.

Production also plummeted in Trump’s waning months in office, but again, that was due to the pandemic.

RELATED: Gas vs. electric vehicles: Advantages of each car as gas prices soar

As President Biden took office, production grew, and the trend in domestic oil production has gone up ever since.

And while the Biden administration did pause new permit approvals, it notes there are some 9,000 approved permits going unused – that’s some 23 million acres’ worth of approved leases going unused.

In December, Biden’s secretary of energy, Jennifer Granholm, told the oil gas and oil lobby, "Please take advantage of the leases that you have. Hire workers, get your rig count up."

Why are permits going unused? 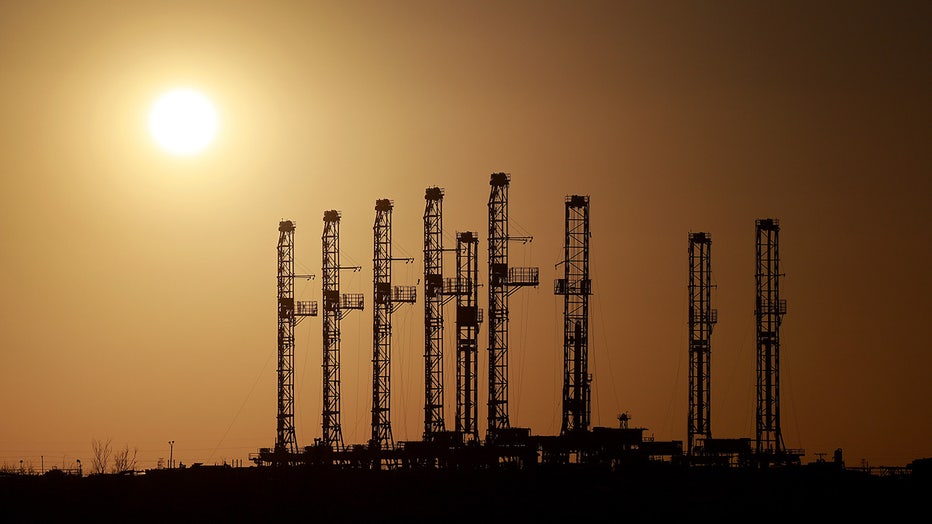 Drilling rigs sit unused on a company's lot located in the Permian Basin area on March 13, 2022 in Odessa, Texas. The Permian Basin is the largest petroleum-producing basin in the United States. (Photo by Joe Raedle/Getty Images)

In that same December video call, Granholm also acknowledged one of the biggest challenges in new drilling: "There are struggles around financing."

And that’s where the Biden administration’s move toward clean energy – and the president’s own words – could be making it harder for the oil producers to line up the investors they need to for new drilling operations on all that land that has already been approved.

On the campaign trail, Biden promised to reduce reliance on fossil fuels. Such a move would eventually get the U.S. out of the predicament of relying on global villains – and propping up their regimes – while also fueling the climate crisis.

But in the meantime, it might also give oil drilling investors some pause, which could lead to some land approved for extraction sitting idle.

How can we lower oil prices?

Now, politicians are looking at different proposals to reduce the impact of rising prices, from temporary gas tax holidays to banning domestic oil from going to other countries so we can use it here.

After all, the U.S. is the global leader in oil production, but doing that would hit other nations that depend on our oil, which could drive up global prices even more – and make other nations even more dependent on Russia.

The president ruled out an export ban before the invasion, and then after the invasion banned oil imports coming in from Russia.

President Biden said that means the U.S. won’t be funding Putin’s war by buying Russian oil, but it also means our gas prices will go up even more.

RELATED: List of Russian goods that are banned, boycotted in US

The U.S. is on the path to replacing Russian oil, but it will take time and prices continue to rise. And that has led then Biden administration to look into ways to try to get more oil from Venezuela or Iran to replace what we’re banning from Putin.

The bottom line is, it’s all far more complicated than what the politicians’ sound bites and tweets may suggest.

This story was reported from Tampa, Fla.