A far-right internet personality pleaded guilty Friday to joining the mob that stormed the U.S. Capitol, where he streamed live video that incriminated him and other rioters, according to a court filing.

Anthime Gionet, known as "Baked Alaska" to his social media followers, faces a maximum sentence of six months imprisonment after pleading guilty to a misdemeanor count of parading, demonstrating or picketing inside a Capitol building.

The judge had scheduled a March 2023 trial for Gionet after he balked at pleading guilty during an earlier hearing. Sullivan refused to accept a guilty plea by Anthime Gionet in May after he professed his innocence at the start of what was scheduled to be a plea agreement hearing. 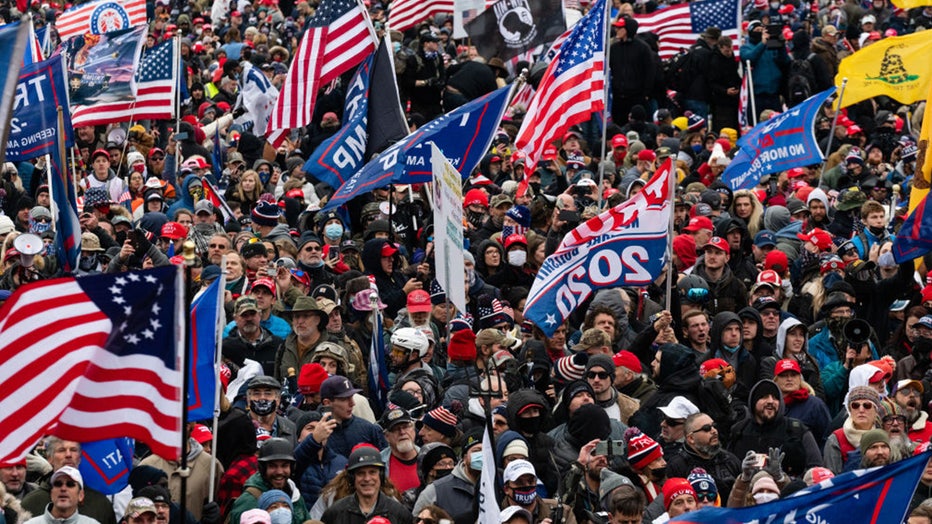 At the start of Friday's virtual hearing, defense attorney Zachary Thornley told the judge that a protester was outside Gionet's Florida home and was recording the proceedings over the telephone, a violation of court rules.

"Protesting what?" the judge asked.

"I guess him as a person," Thornley replied.

The judge instructed court staff to shut off the telephone line, preventing the public from hearing Gionet enter his guilty plea.

Two of Gionet's lawyers didn't immediately respond to calls for comment after the hearing.

After entering the Capitol on Jan. 6, 2021, Gionet streamed live video that showed himself inside the building and repeatedly encouraging other rioters to stay there.

"Come in. Let's go. Come on in. Make yourself at home," Gionet told other rioters, according to a court filing accompanying his guilty plea.

Jan. 6 hearing: Trump didn’t want to say ‘election is over’ | LiveNOW from FOX

The House Jan. 6 committee has aired a previously unseen video outtake of President Donald Trump saying, "I don’t want to say the election is over" the day after insurrection at the U.S. Capitol. The committee showed outtakes from a speech that Trump recorded on Jan. 7, 2021, in which he resisted the idea of saying that the election is over.

Gionet joined others in chanting, "Patriots are in control!" and "Whose house? Our house!" Before leaving, he profanely called a police officer an "oathbreaker," the FBI said.

Gionet worked at BuzzFeed before he used social media to build an online following in far-right political circles. Defense attorney Zachary Thornley said Gionet "has long been a member of the press."

"His actions on the day many folks entered the Capitol were no less then he has always done. He filmed it. That is what he does," Thornley wrote in a court filing last year.

Prosecutors disputed Gionet’s contention that he is a member of the news media.

Gionet became known for posting videos in which he attempts to pull pranks or troll his targets. He also has a history of promoting far-right extremism. He was scheduled to speak at the white nationalist "Unite the Right" rally in 2017 before it erupted in violence on the streets of Charlottesville, Virginia.

Mainstream internet platforms, including Twitter, suspended Gionet's accounts before Jan. 6. At the Capitol, he was livestreaming video using a fringe service called DLive.

Other Capitol riot defendants have claimed that they were acting as journalists, not insurrectionists.

Infowars host Jonathan Owen Shroyer has asked a judge to throw out his riot charges. Shroyer’s lawyer argues the Justice Department is prosecuting him for his constitutionally protected "rights to protest, speak freely and report the news." Prosecutors counter that the First Amendment doesn’t protect Shroyer’s conduct at the Capitol.

Gionet, who grew up in Anchorage, Alaska, was arrested in Houston less than two weeks after the riot. He moved from Arizona to Florida after his arrest.

In January, Gionet was sentenced to 30 days in jail for misdemeanor convictions stemming from a December 2020 encounter in which authorities say he shot pepper spray at an employee at a bar in Scottsdale, Arizona.

Gionet's plea agreement includes a provision allowing investigators to review any of his social media accounts for posts around the time of the Capitol riot.