New Year's 2020 celebrations kick off around the world

From Tokyo to Sydney, here’s a look at how many parts of the world rang in the new year.

TOKYO - Fireworks and cheers ushered in 2020 around the world, as the globe bid farewell to the decade that gave rise to the smartphone, social media, Netflix and streaming, the #MeToo movement and President Donald Trump.

Here’s a look at how many parts of the world rang in the new year. 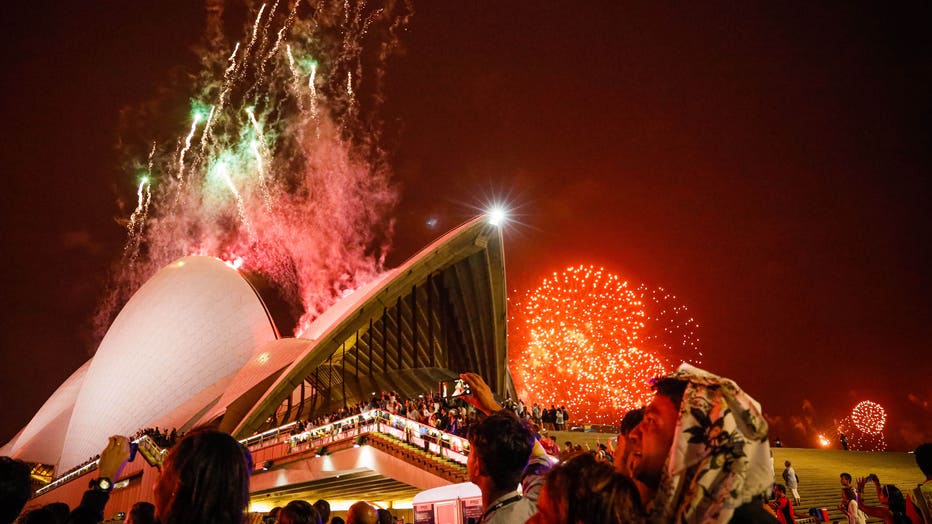 In Hong Kong, revelers as well as pro-democracy protesters flocked to sites across the region to bring in 2020.

The semi-autonomous Chinese city toned down New Year's celebrations amid the months-long demonstrations. The protests have repeatedly sparked pitched battles with police and have taken their toll on Hong Kong's nightlife and travel industries.

A fireworks display that traditionally lights up famed Victoria Harbor was canceled amid safety concerns, while some roads were closed and barriers set up in the Lan Kwai Fong nightlife district to control crowds.

Footage was shared by local media outlet SocREC, which said demonstrators shouted the protest slogan during the last eight seconds of the New Year’s Eve countdown.

Australia welcomed in the new year with a fireworks display at the iconic Sydney Harbour and surrounding areas, despite the ongoing wildfire crisis ravaging New South Wales, Australia’s most populous state.

Footage showed the Sydney Opera House and Sydney Harbour Bridge as fireworks were set off just after midnight.

New South Wales has sustained the brunt of the wildfire damage, which has razed more than 1,000 homes nationwide and killed 12 people over the past few months.

New Zealand's major cities greeted the new year with fireworks as the nation appeared happy to be done with a year of challenges, both natural and man-made.

Video on Instagram showed the Sky Tower in Auckland lit up just at midnight.

On March 15, a lone gunman killed 51 people and wounded dozens at two mosques in the South Island city of Christchurch. In December, an eruption of volcanic White Island off the east coast of the North Island killed at least 19 tourists and tour guides.

In Japan, crowds gathered on the streets of Tokyo to count in 2020. Video on Twitter shows the celebrations in the Shibuya City area of the capital as people counted down to midnight.

People flocked to temples and shrines across the country, offering incense with their prayers to celebrate the passing of a year and the first New Year's of the Reiwa era.

Under Japan's old-style calendar, linked to emperors' rules, Reiwa started in May, after Emperor Akihito stepped down and his son Naruhito became emperor. Although Reiwa is entering its second year with 2020, Jan. 1 still marks Reiwa's first New Year's, the most important holiday in Japan.

Stalls at Zojoji Temple in Tokyo sold sweet rice wine, fried noodles and candied apples, as well as little amulets in the shape of mice, the zodiac animal for 2020. Since the Year of the Mouse starts off the Asian zodiac, it's associated with starting anew.

Tokyo will host the 2020 Summer Olympics, an event that is creating much anticipation for the entire nation.

In Taiwan, fireworks erupted in the capital of Taipei. Footage shows people counting down and fireworks lighting up the darkness.

The fireworks display from Taipei 101, Taiwan’s tallest building, has been the island’s customary show to celebrate the incoming New Year since 2004 to 2005.

Meanwhile, Russians began the world’s longest continuous New Year’s Eve celebration with fireworks and a message from President Vladimir Putin urging them to work together in the coming year.

Putin made the call in a short speech broadcast on television just before the stroke of midnight in each of Russia’s 11 time zones. The recorded message was followed by an image of the Kremlin Clock and the sound of its chimes. State TV showed footage of extensive festive fireworks in cities of the Far East.

But one holiday tradition was missing in Moscow this year — a picturesque layer of snow. The Russian capital has had an unusually warm December and temperatures in central Moscow as midnight approached were just above freezing.

RELATED: Decade of the smartphone: 2010s ushered in larger devices, more apps and ‘screen time’ issues
RELATED: A decade of farewells: 20 notable deaths in the 10 years leading up to 2020