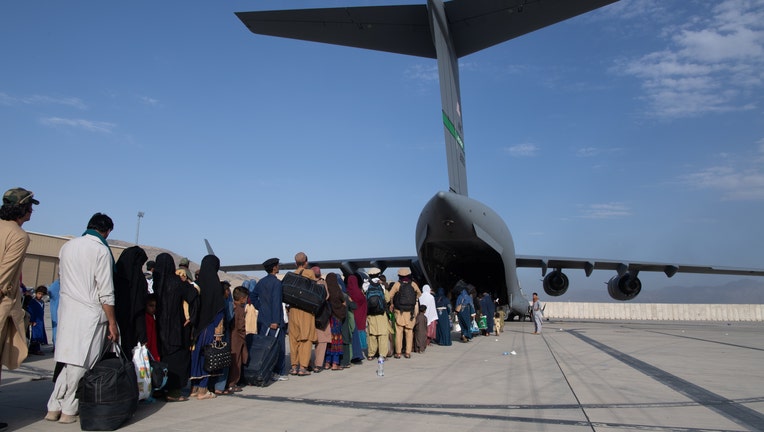 PHOENIX - Gov. Doug Ducey says the state has received its first group of recently evacuated Afghans to be resettled in Arizona.

Ducey said in a tweet overnight that the group arrived Sunday night, and "we know there are more on their way."

The Republican governor noted the Afghans were vetted through background checks.

He said the U.S. must keep its promises to the people who helped the American military in Afghanistan. Tens of thousands of Afghans have been evacuated from their country with the end of the United States’ longest war. Many helped the U.S. military as interpreters and in other roles.

Ducey did not say how many were in the group.

The Arizona Office of the International Rescue Committee says its nonprofit agency on Sunday received 18 evacuated Afghans for resettlement.

"In the next six months, we probably will see hundreds" of Afghans arrive through the state’s various resettlement agencies, said Aaron Rippenkroeger, executive director for the committee in Arizona.

Rippenkroeger said he was grateful for the bipartisan support that Ducey and other leaders in Arizona had given the effort to resettle Afghans in the state.

Stanford Prescott, a U.S. network communications officer for the organization, said details about the evacuees being resettled in Arizona were being withheld for now for their safety.

Afghans evacuated in recent days by the American military are largely being processed and housed in U.S. government facilities across the country before going to resettlement agencies that will determine their final destinations.

Prescott said the top states for Afghans with special immigrant visas for military translators historically have been California, Washington state, Texas, Virginia, and Maryland, although Arizona has received a smaller, significant number.

He said the committee’s Arizona office was already receiving Afghans including military translators through normal resettlement pathways long before the current crisis.

He said 31 Afghans with the special immigrant visas granted to military translators and another 18 Afghans with refugee status were brought to Arizona between Oct. 1, 2020, through July 31.

Some are starting donation drive for the refugees

As refugees from Afghanistan begin to arrive in Arizona, a Valley woman is doing what she can to donate much-needed supplies for those who have had to flee the country.

As the refugees make their way to Arizona, some Arizonans, like Sammie Jones-Merrell, knew the refugees will need supplies. As a result, she is hosting a donation drive.

"They’re coming with nothing. Most of them are coming with just the clothes on their back or a backpack full of stuff," said Jones-Merrell.

Jones-Merrell is collecting all sorts of item, especially things for immediate needs.

"Like laundry detergent diapers, soaps, some sizes of shoes that they sound like they’re low on," said Jones-Merrell.

Ones her donation drive is complete on Sept. 3, Jones-Merrell will pack up a truck, and take the items to two local organizations.

"Both of them are in Tempe. One of them is called the ‘Welcome to America Project.’ They’re the ones needing the things like laundry detergent," said Jones-Merrell. "Then, ‘Gathering Humanity.’ They’re accepting some bigger donations, so I’ll be dropping off furniture there, and another thing people will be dropping off is bikes because bikes are free transportation for these people."

Jones-Merrell said while this may be just a small drop in the bucket, she is happy she can help in some way.

"Something I feel like people have been feeling helpless about like the situation this last couple of weeks. This is finally something that we can do, and I think a lot of people want to help," said Jones-Merrell.