Critical race theory has become a lightning rod for Republicans, but what exactly is it

FORT LAUDERDALE, Fla. - After a delay of nearly a week, the Florida Department of Education has released two examples that it says back up its rejection of dozens of math textbooks because they contained questions and exercises based on Common Core or critical race theory, issues that opponents say are not actual problems.

The state did not identify which textbooks the examples come from, but one appears to be from an advanced high school algebra or statistics textbook and begins with the phrase, "What? Me? Racist?" It has students work with data reported by an online test that researchers say uncovers hidden attitudes toward different races.

The other appears to come from a teacher's guide to a kindergarten or first-grade textbook. The lesson is entitled "Social and Emotional Learning - Building Student Agency"; students work together as they put the numbers 1 to 5 in proper order so they can "build proficiency with social awareness as they practice with empathizing with classmates." 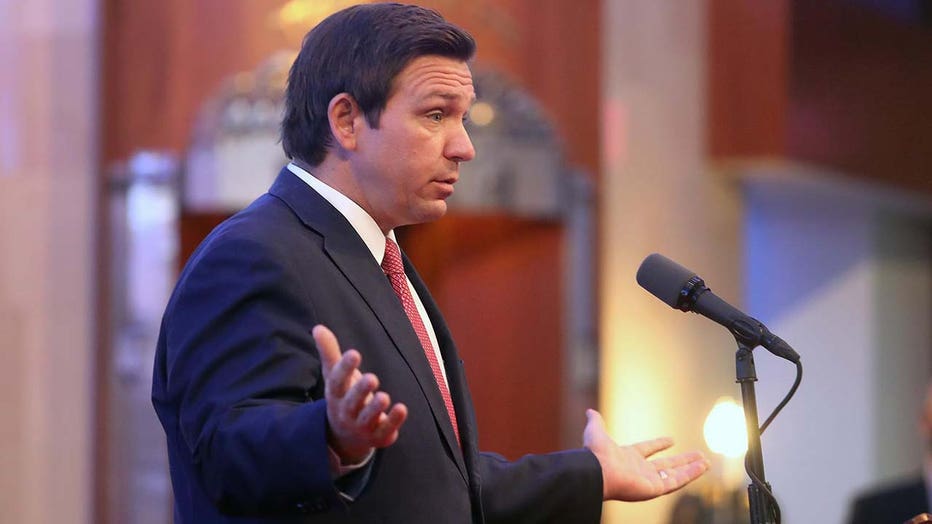 The state rejected more than 50 math textbooks — about 40% of those submitted. Despite the state's disapproval, under Florida law individual districts can still buy the texts if at least half their book spending is on approved material.

"It seems some publishers attempted to slap a coat of paint on an old house built on the foundation of Common Core, and indoctrinating concepts like race essentialism, especially, bizarrely, for elementary school students," Republican Gov. Ron DeSantis said in a statement when the rejections were announced late last week. The examples were released Thursday.

Florida Democratic Party Chair Manny Diaz, a former Miami mayor, said in a statement that Florida has long had a system for picking appropriate books, but it is being politicized by the DeSantis administration.

"What Florida politicians are trying to do now is ignore the judgement of professionals and impose their own political views (behind closed doors) on every parent and child in Florida," he said.

The Common Core standards are benchmarks adopted by more than 40 states to describe what students should know after completing each grade. The standards were developed by the National Governors Association but became a frequent target of Republicans after the Obama administration pushed states to adopt them.

Opponents contend Common Core includes inappropriate curriculum that is being forced on states. Florida adopted Common Core in the 2000s under Republican Gov. Jeb Bush, who was a strong proponent. But it dropped Common Core in 2020 under DeSantis, who said it was being replaced by "Common Sense."

Critical race theory centers on the idea that racism is systemic in U.S. institutions and that they function to maintain the dominance of white people in society. There is little to no evidence that critical race theory is being taught to K-12 public school students, though some ideas central to it, such as lingering consequences of slavery, have been.

DeSantis signed a bill Friday that bars instruction that makes members of a race feel guilty for past actions committed by people of that same race, and bars teaching that meritocracy is racist. It also expands language on requiring teaching on the history of slavery and racial oppression.

The state education department said that the math examples released Thursday are not an exhaustive list of problems it says were reported in the rejected texts by parents. If the publishers want to re-seek approval, they have two weeks to resubmit their books without the content the state found problematic.

The high school example centered around racism is based on data released by the Implicit Bias Test, an online set of surveys whose organizers say uncover hidden attitudes on a variety of subjects. It is operated by Project Implicit, which was founded in 1998 by professors from three institutions: Harvard University, the University of Virginia and the University of Washington.

The rejected textbook does not ask the students to take the Implicit Bias Test, but the surveys are readily found online. In the race test, participants are shown a series of photos of white and Black faces mixed with positive and negative words such as "glad" or "sadness." In one round, participants are asked to press as quickly as possible the same letter when presented with a white face or a positive word and another letter when presented with a Black face or a negative word.

In the next round, the mixture is reversed — users press the same key when presented with a white face or negative word and the other when presented with a Black face or a positive word. There are more rounds where keys are further reversed. Using accuracy and speed, the organizers believe they can uncover a person's hidden bias to a particular race, if one exists.

In the example released by the state, students are asked to work with Project Implicit data that says younger and older people are more racially prejudiced than those in middle age and conservatives are more racially biased than liberals.

"If you want to teach your kid Woke Math, where ‘2+2=4’ is white supremacy, you’re free to buy any CRT math textbook you want. You just cannot force Florida taxpayers to subsidize this indoctrination," the governor’s press secretary, Christina Pushaw, said on Twitter.

But Democratic Party Chair Diaz, a son of Cuban refugees, said the Republicans are trying to bend facts to their own narrative.

"Maintaining or advancing their power requires they control our lives and what we think. My parents did not escape communism in order to have their children live in another authoritarian government, plain and simple," he said.