In the two years documentary filmmakers shadowed former Congresswoman Gabby Giffords, the most jarring moment for them was in the kitchen of her Tucson, Arizona, home.

As cameras were rolling, she and her husband, Sen. Mark Kelly, nonchalantly opened the freezer. Kelly grabbed a plastic container and revealed it holds the piece of Giffords’ skull that had to be removed after she was shot.

"This stays in here next to the empanadas and the sliced mango," Kelly said.

Giffords’ response was "Sera, sera," referencing the song "Que sera, sera" or "What will be, will be."

The scene from the film is emblematic of Giffords’ openness to reflect on but not languish in the 2011 shooting that changed her life. That desire is what led her to allow cameras into her life for two years — all as a pandemic was progressing.

"For me it has been really important to move ahead, to not look back," Giffords told The Associated Press while in Los Angeles to promote the film. "I hope others are inspired to keep moving forward no matter what."

From the filmmakers behind Academy Award-nominated Ruth Bader Ginsburg documentary "RBG," the film "Gabby Giffords Won’t Back Down" is partly an intimate look at Giffords’ recovery after the January 2011 shooting that left six people dead and 13 others wounded outside a Tucson supermarket. But the movie, which arrives in theaters July 15, is also an insider view of how she and Kelly navigated gun control campaigns and later a Senate campaign. The movie could not be any timelier with gun reform being debated in government, schools and the U.S. Supreme Court.

'Gabby Giffords Won't Back Down' documentary premieres in Tucson, to be released nationwide July 15

A new documentary is shedding light on the recovery of former Arizona Congresswoman Gabby Giffords. FOX 10's Troy Hayden and Desiree Fluellen talk to directors Julie Cohen and Betsy West about the film and what surprised them the most about Giffords and her husband, Arizona Senator Mark Kelly.

"It’s just a fascinating story about how Gabby came back from an injury that so many people just don’t even survive," said Betsy West, a co-director. "After meeting Gabby on Zoom, we saw just what a great communicator she is. And we had a sense that we might have a lot of fun despite the very difficult subject of gun violence."

At the same time, they wanted to strike the right balance of how much to look back at the shooting.

"We certainly didn’t want to shy away from January 8. Obviously, that’s something that changed her life," said Julie Cohen, the film’s other director. "But Gabby is defined ultimately by everything that she’s achieved before and after that. We wanted it to show that achievement."

The film also doesn’t avoid discussing Jared Lee Loughner, the gunman in the Tucson shooting. Interviews with law enforcement, journalists and a video made by Loughner lay out how he was able to buy a semiautomatic weapon despite a history of mental illness. He was sentenced in 2012 to life in federal prison without parole.

"We did not want to dwell on the shooter but we also wanted to explain what had happened," West said. "Gabby and Mark did not shy away from going to the sentencing hearing to make a very impassioned plea for life imprisonment. That was a very important part of the film." 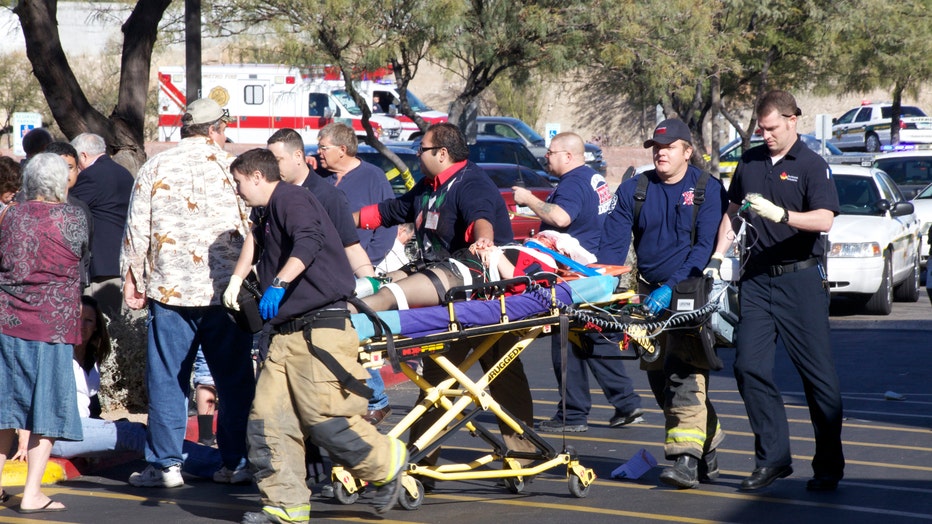 TUCSON, AZ - JANUARY 8: Emergency personnel and Daniel Hernandez (C), an intern for U.S. Rep. Gabrielle Giffords (D-AZ), move Giffords after she was shot in the head outside a shopping center January 8, 2011 in Tucson, Arizona. Hernandez helped to sa (Photo by James Palka/Getty Images)

Recent mass shootings including the deaths of 19 schoolchildren and two teachers in Uvalde, Texas, and 10 supermarket shoppers — all Black — in Buffalo, New York, have put gun violence back at the forefront. The U.S. Supreme Court on Thursday struck down a New York gun permitting law. The case involves a state law that makes it difficult for people to get a permit to carry a gun outside the home. The justices said that requirement violates the Second Amendment right to "keep and bear arms."

Also on Thursday, the U.S. Senate easily passed a bipartisan gun violence bill. Weeks of closed-door talks resulted in an incremental but landmark package in response to mass shootings. The House will vote Friday.

Much like after Uvalde, the documentary recaps how gun control debates reached a fever pitch after 20 first graders and six educators were shot to death by a gunman at a Newtown, Connecticut, school. Giffords and other advocates, including some Newtown parents, were called "props" by National Rifle Association officials. Having spent time with Giffords and others impacted by gun violence, the film’s directors say their voices are central to the discourse.

"To say that somehow Gabby shouldn’t be speaking about gun violence because she’s experienced violence? It just doesn’t make any sense," Cohen said.

A crucial element of the documentary came from videos Kelly had of Giffords in the Tucson hospital and at a rehab facility in Houston. These included then-President Barack Obama — who is interviewed in the film — and Michelle Obama’s visit to an unconscious Giffords’ bedside. They also include the first few months of speech therapy.

The bullet penetrated the left hemisphere of Giffords’ brain that services language ability, causing her to suffer from aphasia. You see in old videos Giffords sob out of frustration as she struggles to read and get stuck on saying "chicken."

Giffords said watching those videos can make her sad, but she is determined to be upbeat.

Giffords is the third movie West and Cohen have produced on a female icon. Last year, they released "Julia," a documentary on the influence of TV chef and author Julia Child. "RBG" was a critical and commercial hit when it came out four years ago. The filmmakers say while Giffords and Supreme Court Justice Ginsburg, who died in 2020 at age 87, are very different personalities, they think viewers will see a lot of similarities. They both have toughness, persistence, optimism and are at the heart of "feminist love stories." WASHINGTON, DC - NOVEMBER 03: Former Congresswoman from Arizona and shooting survivor Gabby Giffords speaks during a demonstration with victims of gun violence in front of the Supreme Court as arguments begin in a major case on gun rights on November (Photo by Joshua Roberts/Getty Images)

Giffords often has to remind people that she still has a voice even if speaking doesn’t come easily — whether it’s on gun safety or other issues. She said she genuinely feels the climate is different now but people have to be patient because change is "slow," and Washington, D.C., is "really slow."

She plans to refocus on making tougher federal background checks a reality through her Gun Owners for Safety coalition. The bill the Senate approved would only strengthen background checks for buyers age 18 to 20.

If there’s one message she wants viewers to take from the documentary, it’s "fight, fight, fight every day," Giffords said.

Eleven years after her own life was massively altered by gun violence, former Arizona Congresswoman Gabby Giffords stood in front of the Washington Monument Tuesday and lobbied anew for stricter gun laws after yet another string of mass shootings in America.