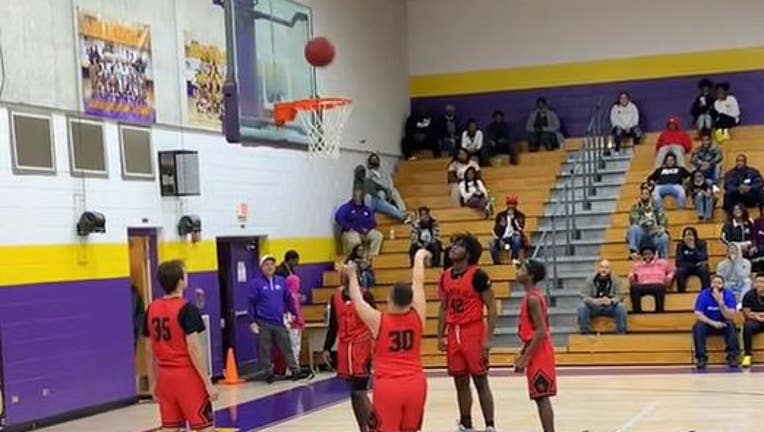 ALACHUA, Fla. - Some have pointed to sports as a valuable avenue for building character, while others have said that sports simply reveal it. Perhaps there’s no better demonstration of both aphorisms than the Santa Fe Raiders Boys Junior Varsity Basketball team in Alachua, Florida.

The team has shown what it means to win beyond the game of basketball.

Heartwarming video shows how a junior varsity high school basketball team helped a player with Down syndrome be the star of the show. Video credit: Shenita Sykes/@sunn.kissed0 TikTok

In an emotion-evoking, video, a freshman player with Down syndrome, Jonathan Jacome, was seen in a game last month with the unrelenting support and encouragement from his teammates to make that shot.

He got possession of the ball and with the flick of the wrist, threw it up. That first shot did not go in and neither did the next one, nor the next one after that. In fact, it wouldn't be until his 11th attempt that he knocked down the game ender.

Jacome’s teammates patiently and repeatedly passed the ball back to him as the opposing team held its position to give him the room and space he needed.

The spectators in the gym cheered on #30, as he carefully and methodically kept going for the bucket.

"One more, one more, baby," called out someone in the stands.

And then it happened: The ball made a beautiful drop into the hoop. The crowd erupted into cheers.

The celebratory moment followed with applause, a pat on the back and a hug from his teammates, as Jacome reveled in it all.

He’s seen flexing proudly and walking over to face the crowd to take in the accolades. He flexed some more, took a grand bow, and threw his arms up with joy before returning to his team for a big hug from his coach, Zech Wilson, also known as "Coach 6ixx."

In a post on social media, Wilson thanked the opposing team and coach from Columbia High School (Lake City, Florida) for being a part of something greater than what’s seen on the scoreboard.

"Thank you to Columbia Tiger's Coach Steve Faulkner @bigfaulk28, Coach @coach_rbell Coaching staff and JV team for being generous and gracious to participate in giving Santa Fe Raider's 9th grader Jonathan Jacome II @downforu21 an opportunity to hit another buzzer beater," Wilson wrote as he shared video, adding, "class act on their part and s/o [shout out] to Santa Fe JV teammates for helping and being great teammates!!!"

A parent of a Raider, Shenita Sykes, shot the video of the Jan. 25 game and said that it was a moment she knew she had to capture because of the heart this team and Jacome demonstrated.

"They did this at a prior game, and I absolutely loved his reaction," Sykes said. "To me, he's always the highlight of the game, whether they win or lose." While they did lose this match-up, Sykes said it didn't change the fact that the kids were winning in life.

The team's proud coach gave credit to all the players on the court that day for being winners.

"It was the love from his teammates and from the Columbia staff, kids and community that made the moment special," Wilson told KTVU, adding what his kids showed on the court was a reflection of how they conducted themselves outside basketball.

"It made me feel really good that Jonathan and his teammates just displayed what they displayed everyday on campus and in practice which is sincerity, love and passion for one another," the coach shared, adding that the team was instinctively very protective of Jacome. "They just took it upon themselves on their own to make sure they include him and look after him," Wilson said.

While video of this moment has been widely shared and gone viral, school officials said this act of inclusion and support was not uncommon with this team, as Coach Wilson made it a point to give Jacome his time on the court as often as possible.

"Doesn't matter what the score of the games is at the time," said Santa Fe High Principal Dr. Timothy Wright. "Toward the end of every game he will put Jonathan in."

And the principal pointed out that often, these events played out on the opposing team's court. "Even on the road, those schools have welcomed us and Jonathan with open arms to give him that moment," Wright shared.

The principal also noted that those moments have created a sense of community and cohesiveness. "This day and age with so much negativity and so much change, here is something that everyone can rally around," he said.

The beloved student athlete has been described as "a wonderful, hardworking young man," who loved his school and of course, the game of basketball.

Wright said he's an active and engaged member of the school community. "In his classes, he loves to participate. He loves his teachers," the principal shared, adding, "It is very rare for Jonathan to have a bad day."

On Jacome’s bio on Instagram, he proclaimed, "Living my best life," with a symbol of a heart and a basketball to emphasize that statement.

And as he strived to live that best life, he did so with the encouragement and support of his teammates who have repeatedly demonstrated that they’ve got his back, while displaying what it means to have character.

Their coach couldn't be prouder. "It's an absolute pleasure, and I'm honored to be able to Coach a team that displays the love and genuineness for one another," he said.

As for his player whom many considered a bright star on the team, the coach praised his passion and heart, saying he's one to always express his love for his team and teammates.

His principal said being a member of the Raiders basketball family just added one more layer to the outgoing, positive person Jacome was. "Being a part of this team means a ton to him, because I think he feels, 'Not only am I a student, but I'm an athlete,'" said Wright. "When he came to Santa Fe, he said, ‘I want to play on the basketball team.’ And I said, ‘Stick with it.’ And he did."

School officials said that the motto Jacome lived by was, "Never Give Up," words he's put into action both on and off the court. 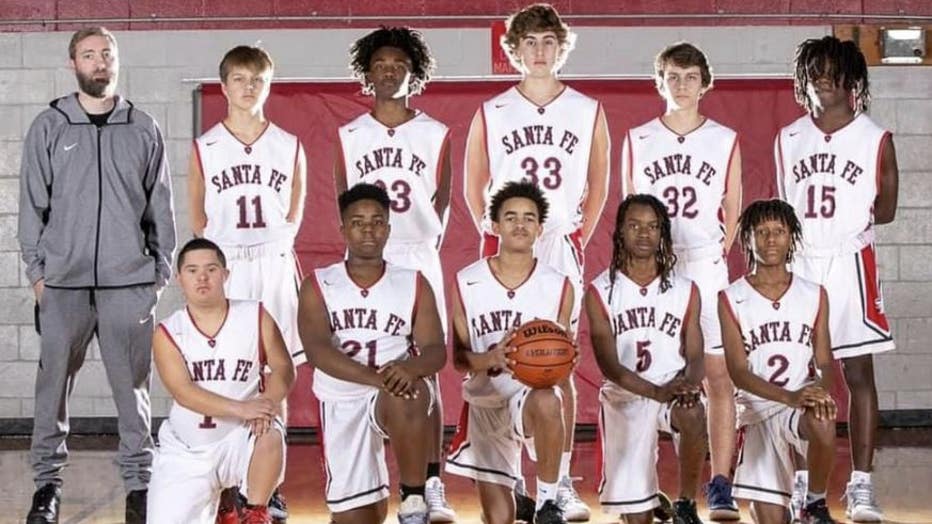 High school freshman Jonathan Jacome, seen here with his basketball teammates and coach from Santa Fe High School in Alachua, Florida, has inspired many with his "Never give up" attitude. (Credit: Jen Chasteen https://www.facebook.com/ChasteenPhotoINK/)