Victims identified in I-10 Picacho Peak crash as Mexican nationals

The Arizona Dept. of Public Safety has identified 3 passengers that died after an SUV crashed head-on into a semi truck last week.

ELOY, Ariz. - An 18-year-old man from Phoenix has been arrested after he allegedly drove an SUV carrying eight other people head-on into a semi truck during a chase on Interstate 10 near Picacho Peak.

DPS says on April 21, a trooper attempted to pull over a Toyota RAV4 for reckless driving, but the driver kept going, and the trooper followed the vehicle. During the pursuit, the vehicle reportedly crossed the median into oncoming traffic and slammed into a tractor-trailer head-on.

Two people in the SUV died at the scene, and one person died at a hospital. Five were airlifted to hospitals in Phoenix and Tucson.

The driver of the SUV, 18-year-old Phoenix resident Kevin Avila, was booked into Pinal County Jail and faces charges of first-degree homicide, endangerment and aggravated assault.

The three victims were identified on April 29 as:

All of them were Mexican nationals, according to DPS.

One person in the SUV is still in the hospital, but the rest of the injured have since been treated and released. Authorities did not disclose any other information about the victims involved in the crash.

Teen driver arrested in I-10 crash that killed 3

Kevin Avila faces multiple charges after he allegedly led Arizona troopers on a chase down Interstate 10 near Picacho Peak, eventually barreling head-on into a semi truck.

It was a chaotic scene for drivers and investigators. There are two investigations going on: Department of Public Safety troopers are looking into the deadly collision and Homeland Security agents are investigating possible human smuggling.

"This took place in a matter of seconds. Moments later, after the trooper attempted to stop the vehicle, it was just a matter of moments between the vehicle not stopping and then crossing the median and striking the tractor trailer," said DPS Sgt. Jesus Gastelum.

The Eloy Fire District says it deployed all of its resources to respond to the crash.

"There were nine people in there and there is a question of the legal status," said Gastelum.

Agents with Homeland Security investigations are interviewing witnesses and survivors, looking into whether the people inside the SUV are part of human smuggling activity.

Eastbound remained closed in the Eloy area during the investigation and re-opened just before 7 p.m.

Triple fatal crash shuts down I-10 in Eloy

A police pursuit on Interstate 10 south of Phoenix ended with a crash that killed three people near Picacho Peak and traffic was impacted all day. 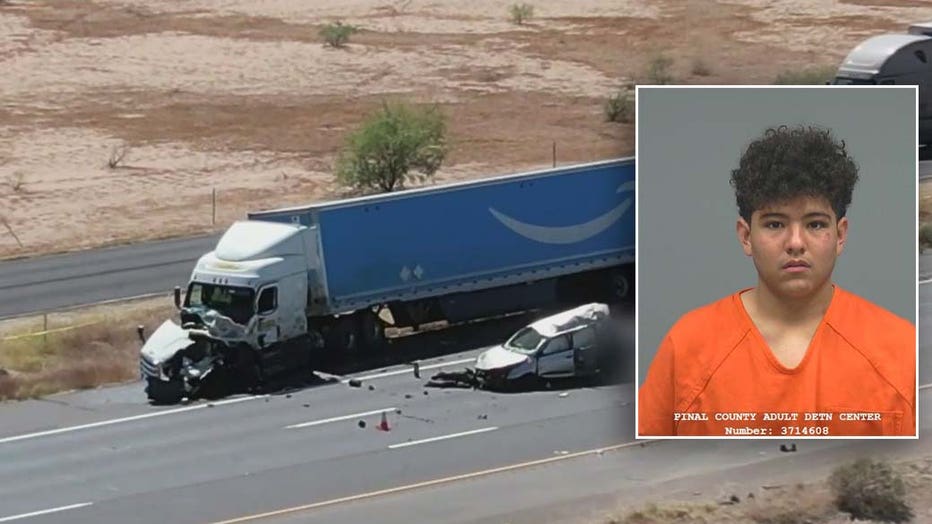 Kevin Avila was arrested after he allegedly drove a van head-on into a semi truck during a chase on I-10.