A big day for former President Jimmy Carter as he celebrates his 98th birthday on Saturday. Carter is the longest living president in US History and the CEO of the Carter Center sat down to reflect on his long legacy.

Carter is celebrating yet another milestone Saturday - his 98th birthday.

The former president will celebrate his birthday with family and friends in Plains, the tiny Georgia town where he and his wife, 95-year-old Rosalynn, were born in the years between World War I and the Great Depression.

HERE'S HOW YOU CAN WISH JIMMY CARTER A HAPPY 98TH BIRTHDAY

Jason Carter, the former president’s grandson now leading the Carter Center board, described his grandfather, an outspoken Christian, as content with his life and legacy.

"He is looking at his 98th birthday with faith in God’s plan for him," the younger Carter, 47, said, "and that’s just a beautiful blessing for all of us to know, personally, that he is at peace and happy with where he has been and where he’s going."

If you'd like to wish the Georgia native a happy birthday, the Carter Center has set up a digital board for people to post heartfelt birthday messages on its website. 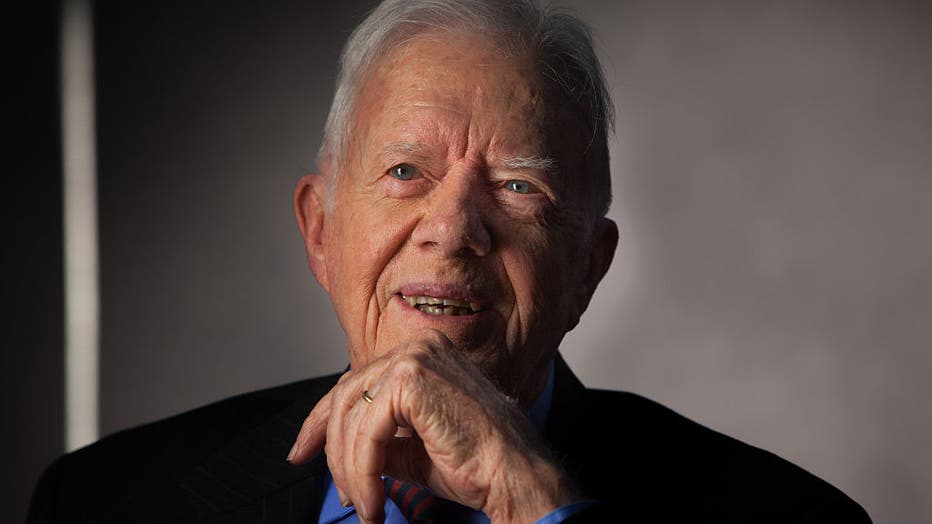 Even at almost 100 years of age, Carter has remained active in championing for human rights throughout the world. The Carter Center in Atlanta, which he founded, continues to promote global health, democracy and human rights.

James Earl Carter Jr. won the 1976 presidential election after beginning the campaign as a little-known one-term Georgia governor. His surprise performance in the Iowa caucuses established the small, Midwestern state as an epicenter of presidential politics. Carter went on to defeat President Gerald Ford in the general election, largely on the strength of sweeping the South before his native region shifted heavily to Republicans.

A Naval Academy alumnus, Navy officer and peanut farmer, Carter won in no small part because of his promise never to lie to an electorate weary over the Vietnam War and the Watergate scandal that resulted in Richard Nixon’s resignation from the presidency in 1974. Four years later, unable to tame inflation and salve voter anger over American hostages held in Iran, Carter lost 44 states to Ronald Reagan. He returned home to Georgia in 1981 at the age of 56.

The former first couple almost immediately began planning The Carter Center. It opened in Atlanta in 1982 as a first-of-its-kind effort for a former president. The stated mission: to advance peace, human rights and public health causes around the world. Carter won the Nobel Peace Prize in 2002. He traveled internationally into his 80s and 90s, and he did not retire officially from the board until 2020.

Since opening, the center has monitored elections in 113 countries, said CEO Paige Alexander, and Carter has acted individually as a mediator in many countries, as well. Carter Center efforts have nearly eradicated the guinea worm, a parasite spread through unclean drinking water and painful to humans. Rosalynn Carter has steered programs designed to reduce stigma attached to mental health conditions.

Despite recent health scares, the former president also continues to be a strong advocate of Habitat for Humanity, solidifying his legacy as one of the country’s most productive former presidents.

The former president had a lot to celebrate. He and his wife, former First Lady Rosalynn Carter celebrated their 76th wedding anniversary in July and made a rare public appearance in August to celebrate her 95th birthday.