A woman said she decided to wait until her second trimester before getting the vaccine. She soon ran out of time.

"It all feels surreal, you know," Berry says, holding her newborn, Kensley. "I've been living in the hospital for 4 and a half months."

The 37-year-old was just over four months pregnant in late August when she believes she contracted the COVID-19 from her 8-year-old son KJ. 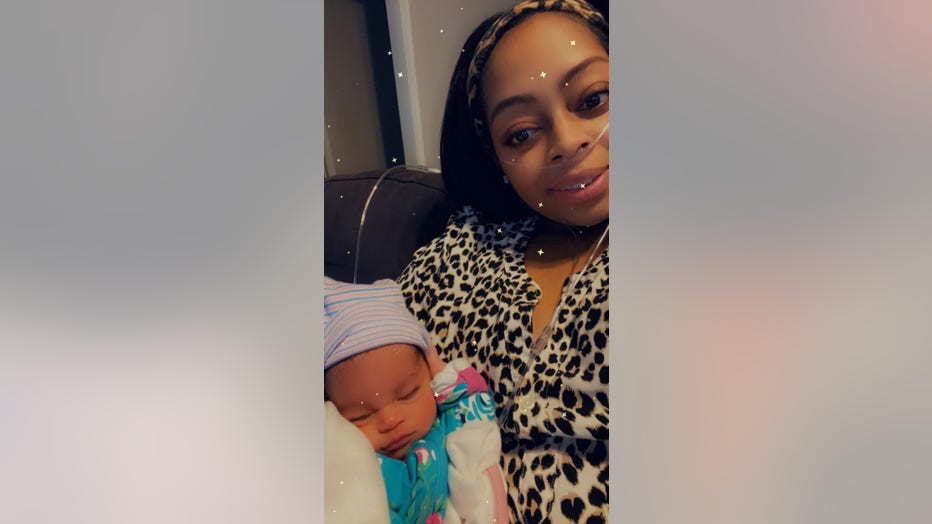 Sheenah Berry, 37, takes a selfie with her baby Kensley 4 days after giving birth. Berry spent half her pregnancy hospitalized with COVID-19 at Piedmont Atlanta Hospital.

Within a week, she was struggling to breathe.

"That that was Sept. 2, actually, and I went to Piedmont Henry, and I didn't come home until Saturday," she says. 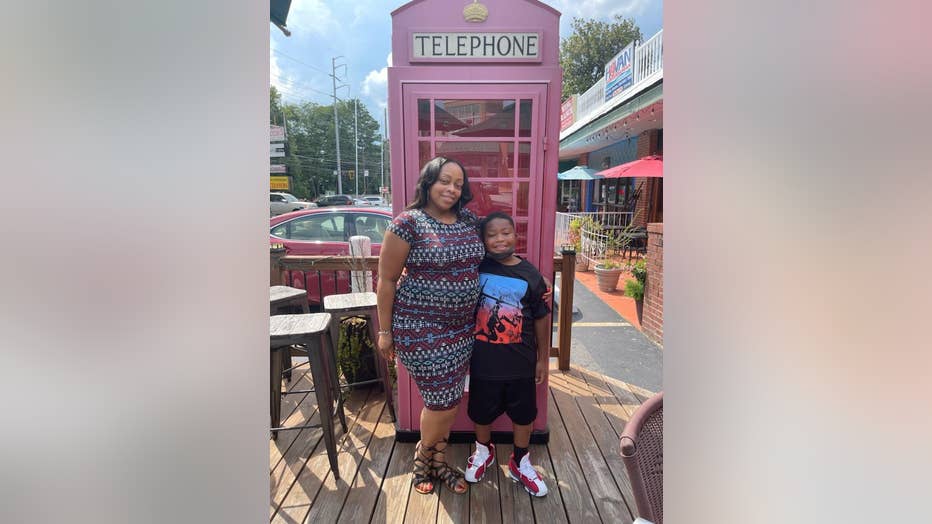 Sheenah Berry poses with her 8-year-old son KJ last summer, weeks before both of them contracted COVID-19.

Berry doesn't remember much of her ordeal, but her sister Wandalyn McKinney says their family, along with Sheenah's fiancé, Brandon, are filling in the blanks for her.

Within hours, the hospital informed the family Berry would need to be placed on a mechanical ventilator, and they were trying to transfer her to Piedmont Atlanta. 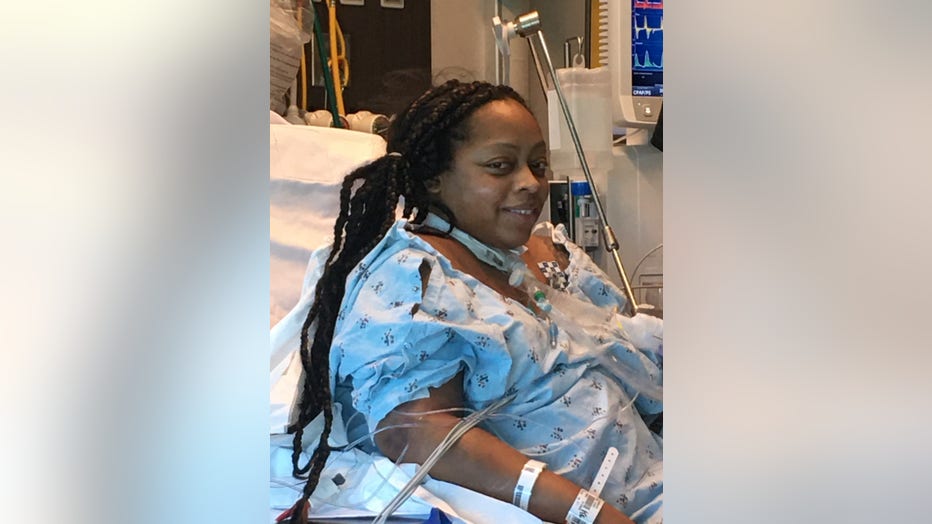 At 37, Sheenah Berry contracted COVID-19 about halfway through her pregnancy. She spent 4 and a half months in the ICU at Piedmont Hospital in Atlanta.

"She was able to call our mom and let her know that she was going to be placed on a ventilator," McKinney says.  "So, they kind of did a FaceTime with each other, and she told our mom, 'I have to go," and that was the last conversation we had with her for almost a month."

"She really was out of options," Dr. Peter Barrett, head of Piedmont's ECMO program, says.

ECMO stands for extracorporeal membrane oxygenation, and it is similar to a heart-lung bypass machine, designed to give a patient's heart and lungs time to rest and recover from a life-threatening medical challenge like COVID-19. 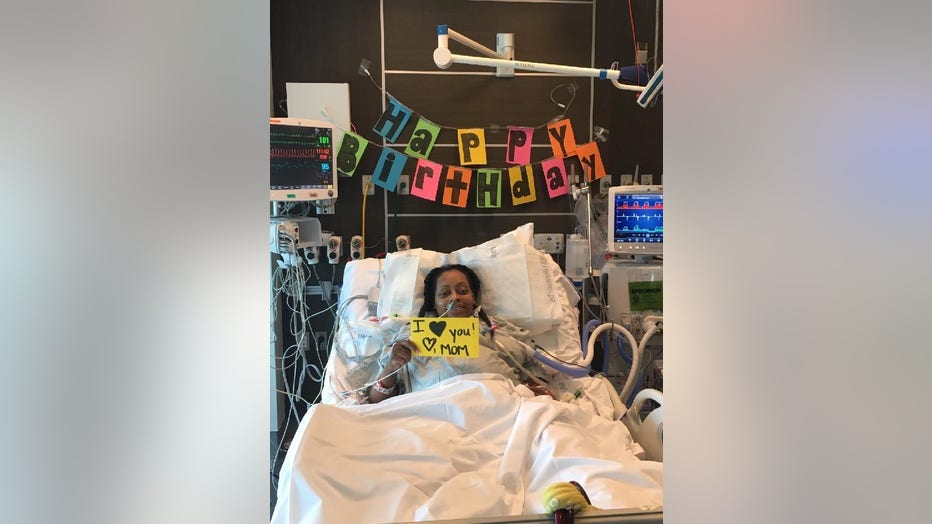 Sheenah Berry, 37, spent four and a half months battling COVID 19 at Piedmont Hospital in Atlanta before giving birth to a healthy baby girl.

Barrett says several people are already "given up" on Berry by that time.

He felt the only chance she and her unborn baby had of surviving their ordeal was to be placed on an ECMO circuit, an extraordinary advanced life support system typically reserved for the sickest COVID-19 patients.

"ECMO is a means of support. It involves two tubes, which are called cannulas. One will drain blood out of the boy and pass the blood through what is essentially an artificial lung called an oxygenator, and then the blood is pumped back into the body."

Piedmont has placed 112 to 114 COVID-19 patients on ECMO machines since the pandemic began. 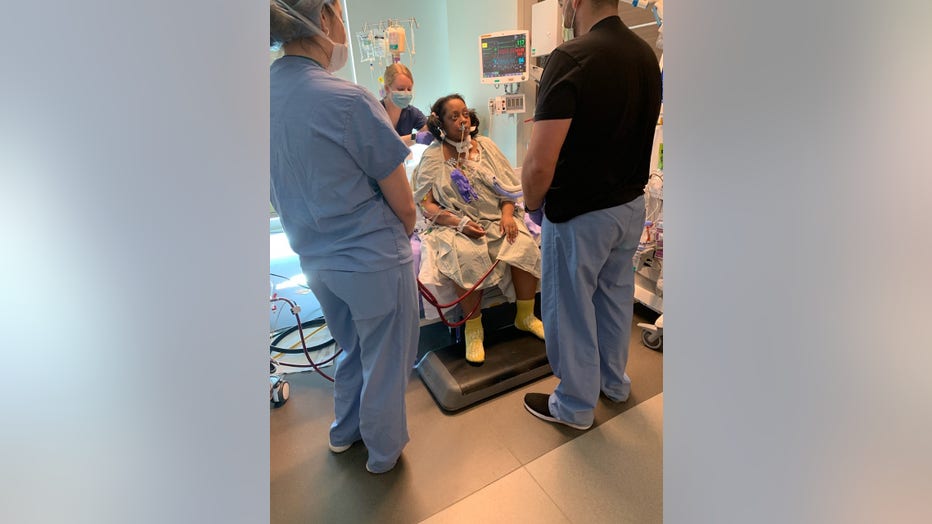 Sheenah Berry, 37, spent four and a half months battling COVID 19 at Piedmont Hospital in Atlanta before giving birth to a healthy baby girl.

About 15 were critically ill expectant mothers.

"All of the babies have done well," Dr. Barrett says. "We had one mother that did succumb."

The machine and the around-the-clock critical nursing care, Barrett says, helped Berry and her baby beat the odds.

"If you keep certain parameters, the baby can continue to grow and develop in a healthy manner," he says. "We supported two individuals, the mom and the baby, and it is a technology that is effective."

Still, he says, the risks were incredibly high for both the mother and baby.

"Her pregnancy was early in the second trimester, and we had not done anybody that early before," he says.

For nearly two months, with Berry in a medically-induced coma, the ECMO machine pumped blood through a cannula out of her body and into an artificial lung machine known as an oxygenator before then delivering the oxygenated blood back into her body through another tube. 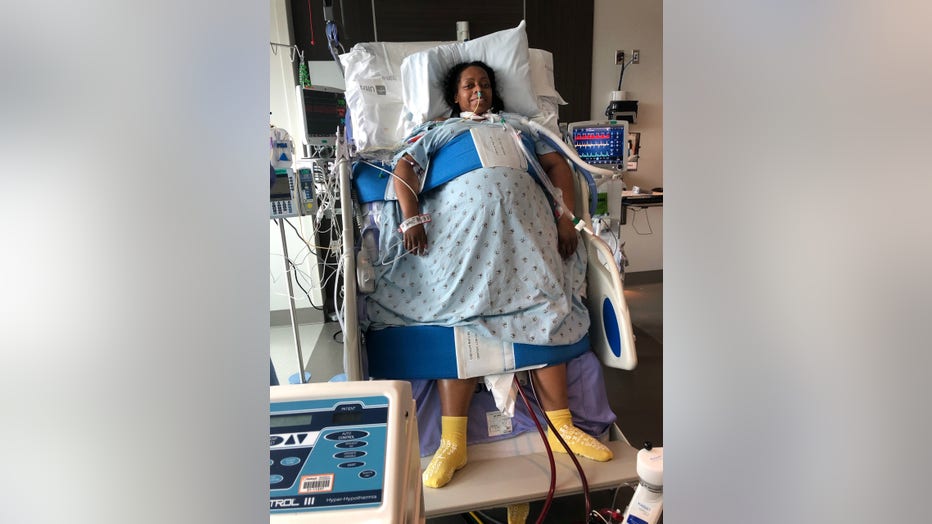 Sheenah Berry spent 4 and a half months battling COVID-19 in Piedmont Atlanta's ICU before giving birth to a healthy baby girl.

"The ultimate goal would be to try to get Rasheenah and her baby to the point of viability, where she could be delivered and managed by the neonatologist," Barrett says.

There were lots of low points, Barrett says, as Berry struggled with delirium and the baby's amniotic fluid began to drop.

For the first couple of months, her family could not be with Berry because of the hospital's strict COVID-19 safety precautions. 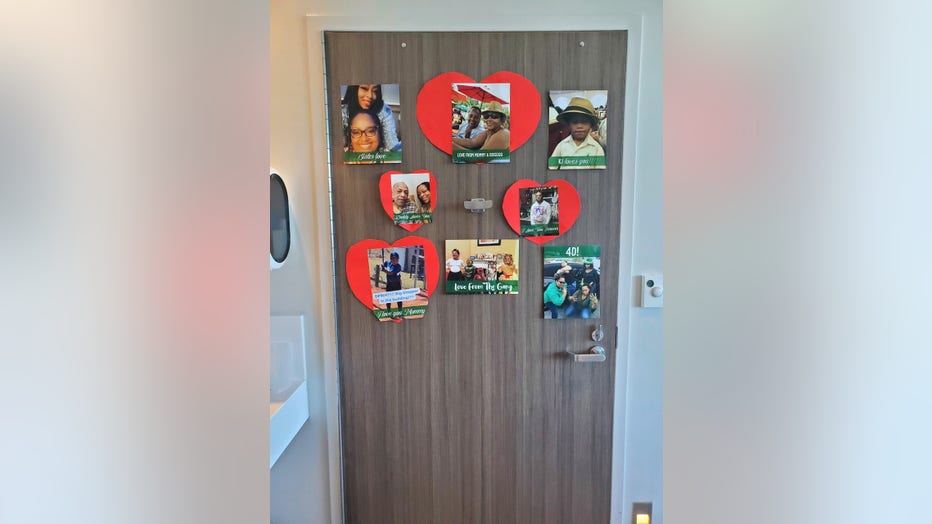 The door of Sheenah Berry's hospital room is decorated with family photos.

Instead, McKinney says, the Piedmont Atlanta ICU staff called 3 or 4 times a day with updates on how her sister was doing.

"Her being on two life support systems at the same time, it was definitely life-altering, I know for her, but us as well, because of the worry, not being able to see her, to talk to her for all of that time," McKinney says. "We prayed over them constantly. And my mom, she said, she just knew they were going to be OK."

And, they were OK. 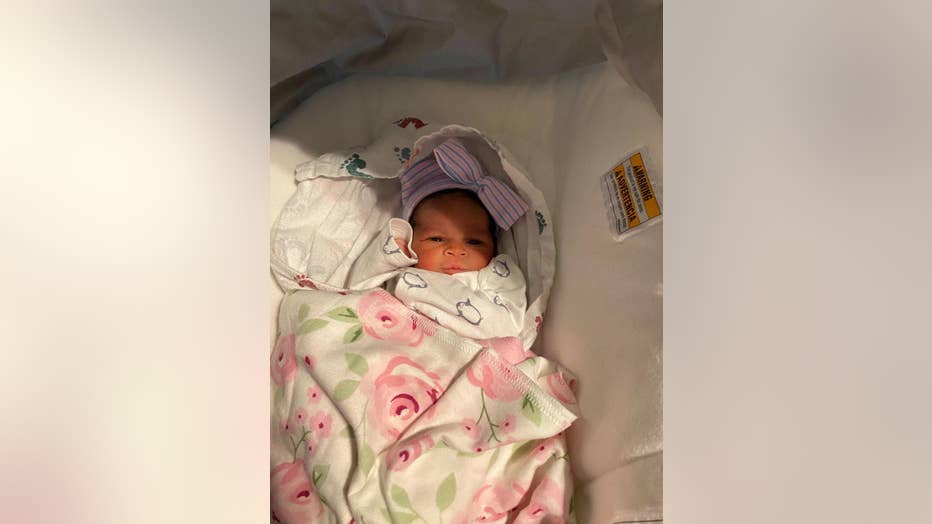 Kensley Berry was born Friday at Piedmont Hospital, where her mother Sheenah spent 4 and half months in the ICU battling COVID-19.

Kensley was delivered Saturday through a caesarian section at Piedmont Atlanta.

She was tiny, weighing just 4 pounds and 12 ounces, but she was healthy.

"It was like witnessing a miracle with your own eyes," McKinney says. "That my sister was able to fight and survive through this, and then now she's bringing her daughter, a child, into the world.  It was just absolutely magical." 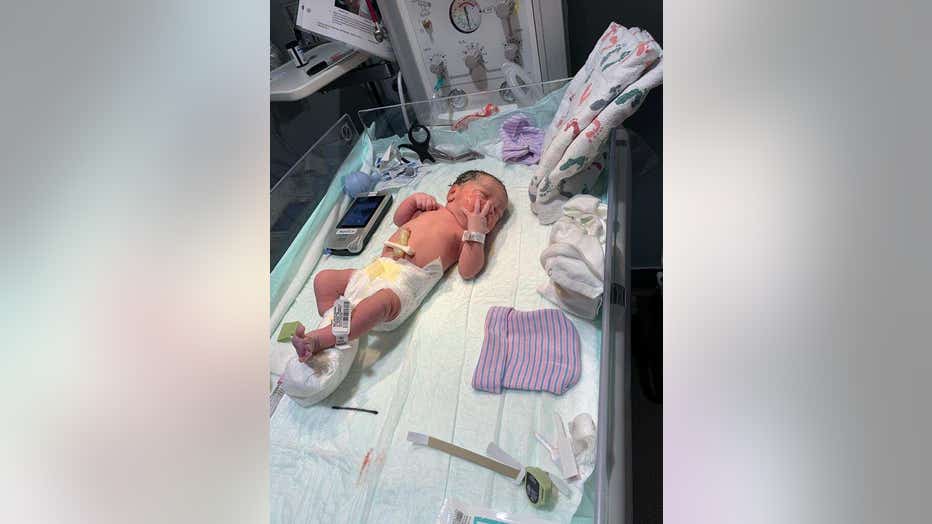 Kinsley Berry was born Friday at Piedmont Hospital, where her mother Sheenah spent 4 and half months in the ICU battling COVID-19.

Berry says she was overcome by relief the first time she saw her daughter.

"It was, like, "Okay, we did it. We made it. Thank you, God," she says. "And, I just want all the pregnant moms to know they need to get vaccinated because that can help."

After initially rejecting the COVID-19 vaccine, Berry says she changed her mind when she got pregnant, after researching the risks the coronavirus can pose for pregnant women.

Because of some complications, she says, she and her doctor decided she should wait until her second trimester to get the vaccine.

Then, she got sick.

Berry finally got vaccinated in her hospital bed in the weeks before she delivered.

This time, there was no hesitation. 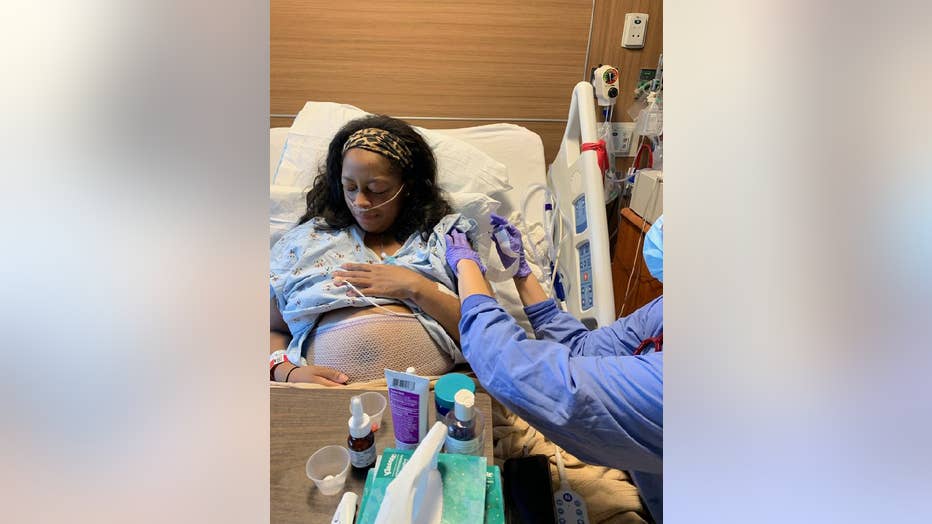 "I was really excited about that," she says. "Because, like my sister said, it's just that extra bit of protection, a little bit of security knowing that I have this shield."

Getting vaccinated earlier, she says, might have spared her this ordeal.

"I know for a fact that had I been vaccinated, that my struggles in the hospital would not have been as bad as they were," she says.  "I'm just thankful to have come out on the other end."

She is still on oxygen, but Berry and Kensley are home and doing well. 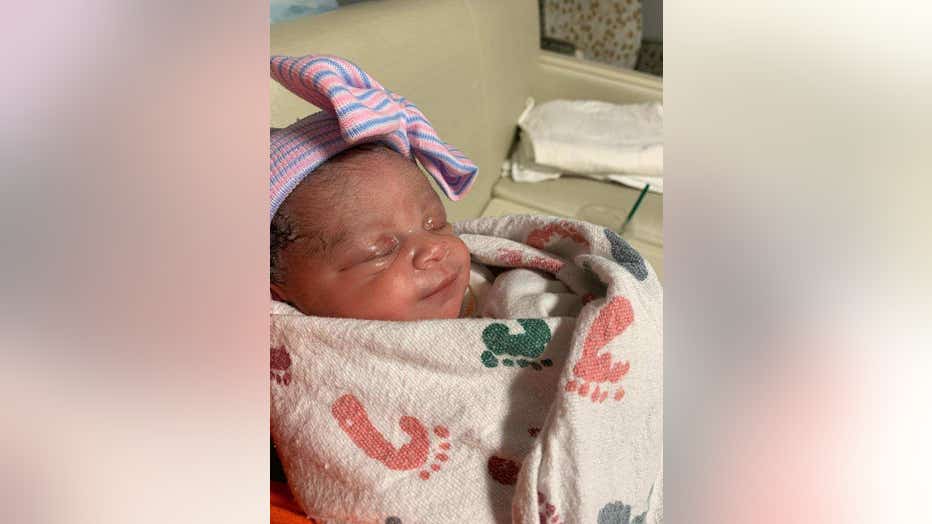 Kensley Berry just after her delivery.

After 136 days, holding her baby feels like a gift.