Hospital staff already overwhelmed in Louisiana by the state’s fourth COVID-19 surge have an added burden in the coming days — working alongside one of the most powerful hurricanes to ever hit the United States.

Ida made landfall Sunday tied for the fifth-strongest hurricane to ever hit the mainland U.S. as hospitals and their intensive care units in the area are already packed with COVID-19 patients.

"Once again we find ourselves dealing with a natural disaster in the midst of a pandemic," said Jennifer Avegno, the top health official for New Orleans.

The surge is sparked by the highly contagious delta variant and low vaccination rates across the state. 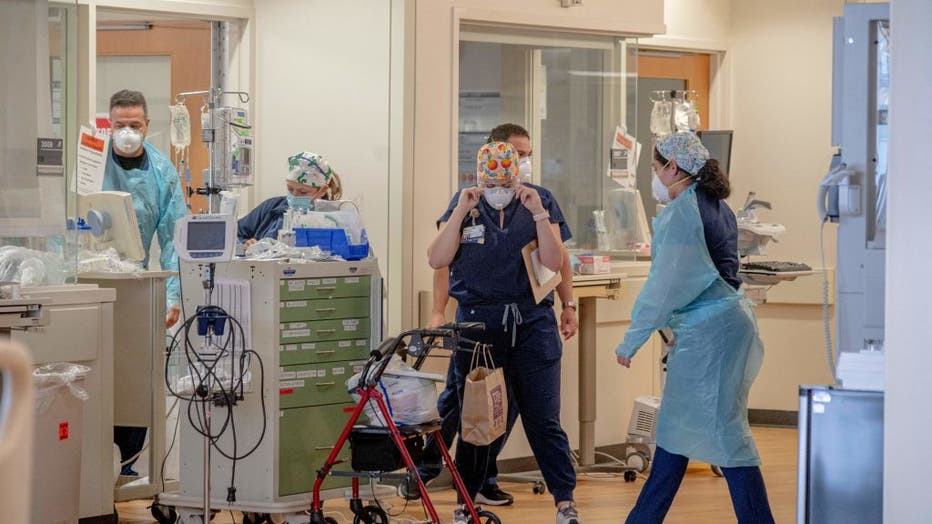 He said Sunday more than 2,400 COVID-19 patients were in Louisiana hospitals, and that evacuating the largest hospitals was not an option. Roughly 15 hospitals in the state’s largest network, Ochsner Health, were in areas to be potentially affected by Ida.

"There aren’t hospitals with the capacity to take them," Edwards said. "And so making sure that they can maintain power and water, have access to all the things that they need and oxygen and other things is going to really consume a lot of our time and attention because we know that the lights could be out, power could be out for weeks."

Daily tallies of new cases in Louisiana went from a few hundred a day through much of the spring and early summer to thousands a day by late July. Statewide, hospitalizations had peaked at around 2,000 or fewer in three previous surges. But that number peaked at more than 3,000 in August.

Hurricane Ida hit Louisiana on Sunday as a Category 4 storm with 150 mph winds.

"We don’t know what the damage is yet, but we’re going to start planning to make sure that we have plenty of generators and expertise on hand to try to keep these hospitals operational. You know, and I hate to say it this way, but we have a lot of people on ventilators today and they don’t work without electricity," Edwards said.

RELATED: Hurricane Ida hits Louisiana as one of most powerful hurricanes to strike US

Officials at Ochsner Health said Saturday they considered evacuating some facilities closer to the coast but that wasn't possible considering how packed other hospitals are.

The network evacuated some patients with particular medical needs from small, rural hospitals to larger facilities.

Hulefeld said the hospital network ordered 10 days of supplies for facilities in areas that might be affected, and everything arrived. Each facility has backup power that was tested and a backup fuel truck on-site. Many of the chain's hospitals also have water wells in case city water goes out.

Dr. Jeff Elder, medical director for emergency management at LCMC Health, said the system’s six hospitals went lockdown mode Sunday. Employees were going to stay at the hospitals for the duration of the storm arrived Saturday and early Sunday and would sleep there.

Elder said one of the first things their hospitals do when storms arrive is discharge patients who are able to leave. However, the patient load is high because of the pandemic so they’re not able to reduce by much. He said the hospitals in the system are more robust since 2005’s Hurricane Katrina.

"We’ve learned a lot since 2005," he said. Key pieces of infrastructure are now raised to keep them out of flooding. For example, at University Medical Center in New Orleans, which was built after Katrina, the generator is raised, diesel supplies are protected and the first floor doesn’t have essential services so even if flood waters get that high nothing essential is lost.

All hospitals in the system have generator backup power, Elder said. He also stressed that communication is now much better between hospitals in the hospital system as well as with various levels of government.