A major winter storm continues to crawl east on Thursday, with heavy snow and ice potentially impacting more than 100 million people across a 2,000-plus-mile swath stretching from Texas and the Southern Plains to the Midwest and Northeast through Friday.

Frigid arctic air has moved into the nation's heartland as moisture from the Gulf of Mexico surges northward ahead of a cold front.

That moisture is overlapping with the fresh cold air, fueling an expansive area of snow and ice impacting millions of Americans from the nation's southern border to its northern border.

Freezing rain, sleet and some snow were ongoing Thursday morning as far south as North and Central Texas, including the Dallas/Fort Worth, Austin and San Antonio metro areas, where icy roads were creating slick travel conditions. A large area of snow and ice also extended northeastward into parts of the Midwest and interior Northeast. Up to an inch of sleet was reportedly covering the ground around the Little Rock, Arkansas, metro area Thursday morning. 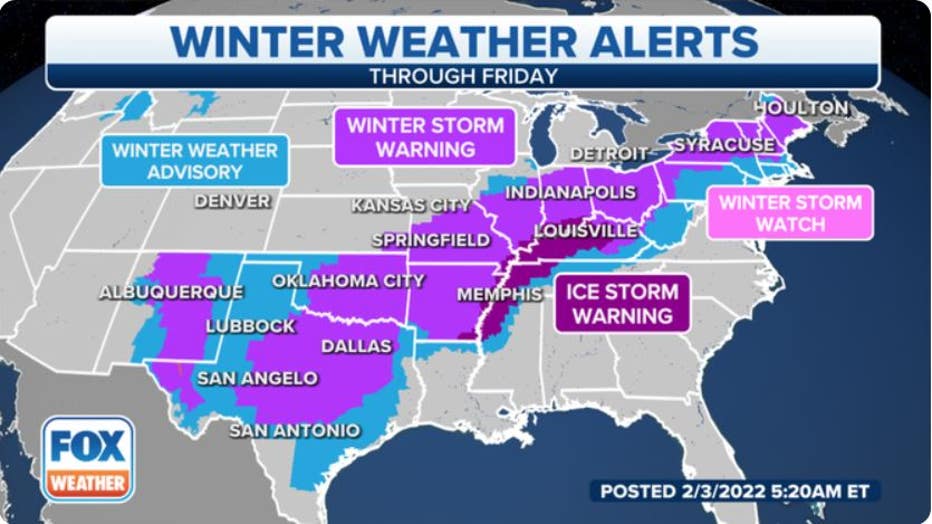 Cities under Winter Storm Warnings include Dallas/Fort Worth and Austin in Texas, Oklahoma City and Tulsa in Oklahoma, St. Louis, Indianapolis, Cleveland, Pittsburgh, Buffalo and Syracuse in New York, Burlington in Vermont and Portland and Bangor in Maine.

The Ice Storm Warnings include Memphis in Tennessee, Louisville and Lexington in Kentucky and Evansville in Indiana.

Snow, sleet and/or freezing rain will make driving conditions hazardous in these regions Thursday and/or Friday, so you're advised to postpone or cancel any travel plans along the path of this winter storm. There may also be power outages and tree damage in any areas that see significant icing from freezing rain, especially where Ice Storm Warnings are in effect.

Here is our current outlook for the winter storm's timing and expected snow and ice amounts through Friday. Be sure to download the FOX Weather app for the latest forecast and weather alerts for your exact location, plus the 24/7 livestream. 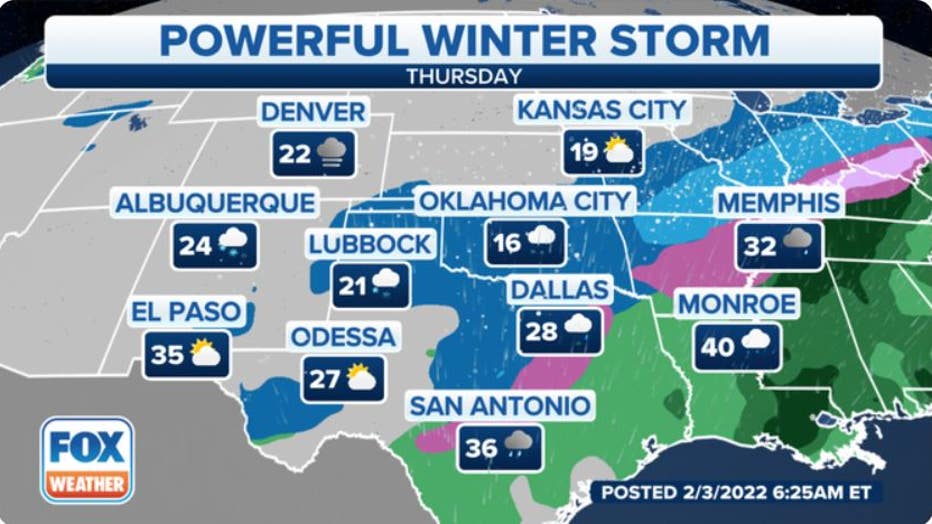 Light icing from freezing rain might extend all the way into parts of the Houston metro area later Thursday into Thursday night, which could result in slick travel conditions.

7 THINGS TO KNOW ABOUT FREEZING RAIN 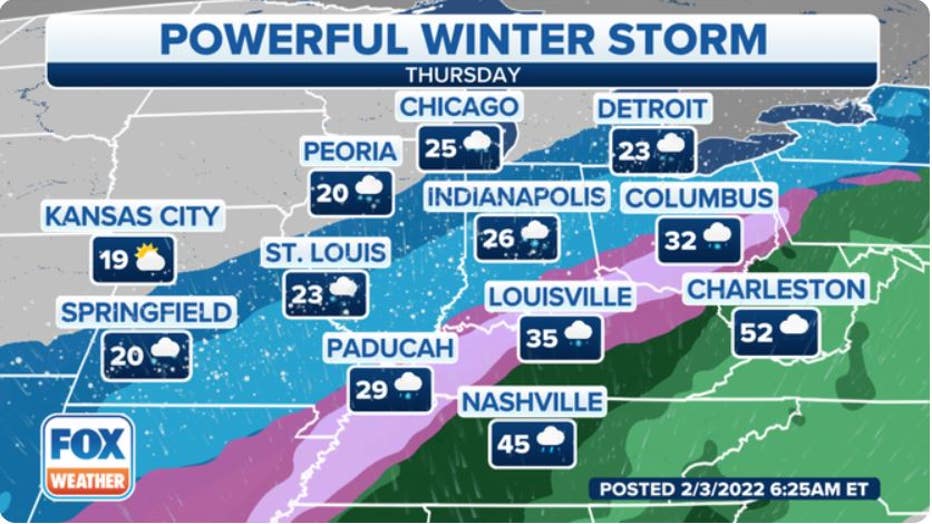 On the storm's warm side, a soaking rain is expected for much of the Northeast, including the Interstate 95 corridor from Boston to Washington.

Thursday night, the wintry mess of precipitation should gradually taper off in the Southern Plains and Ozarks, but snow, sleet and freezing rain will continue through the night from the mid-Mississippi and Ohio valleys to the interior Northeast. 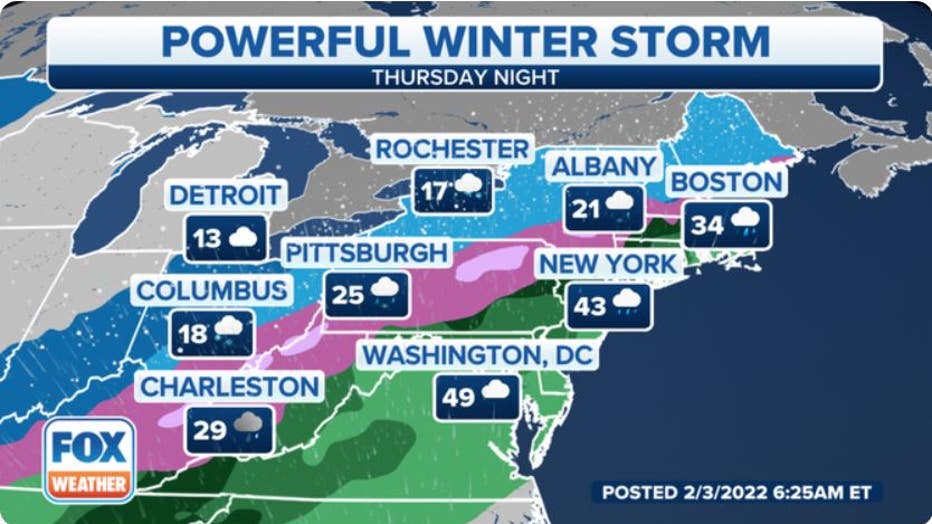 This storm's cold front will finally reach the Northeast on Friday, which could usher in enough cold air to change the rain over to a period of snow, sleet or ice from southern New England to at least portions of the New York City tri-state area.

Slick travel conditions are possible where the rain is able to change over to wintry precipitation. Southern New England has the highest risk of travel impacts because rapidly falling temperatures will lead to a flash freeze-up of wet roads in the region.

Farther north and west, snow will continue much of the day from the upper Ohio Valley to western and northern Pennsylvania, upstate New York and northern New England. 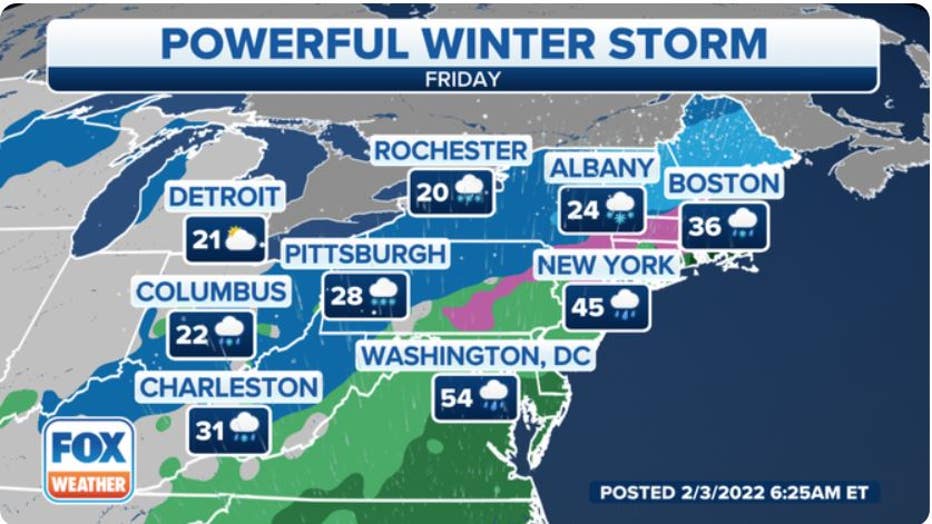 A widespread area of snow has already fallen since Tuesday night and Wednesday from portions of Colorado and New Mexico to parts of Kansas, central and northern Missouri, central and northern Illinois, northern Indiana and Lower Michigan. More than 6 inches was measured around the Chicago, Detroit and Denver metro areas.

The heaviest additional snowfall will target the Ohio Valley, upstate New York and northern New England, where storm totals are also expected to exceed 6 inches. A foot or more of snow could fall in portions of upstate New York, Vermont, New Hampshire and Maine through Friday. 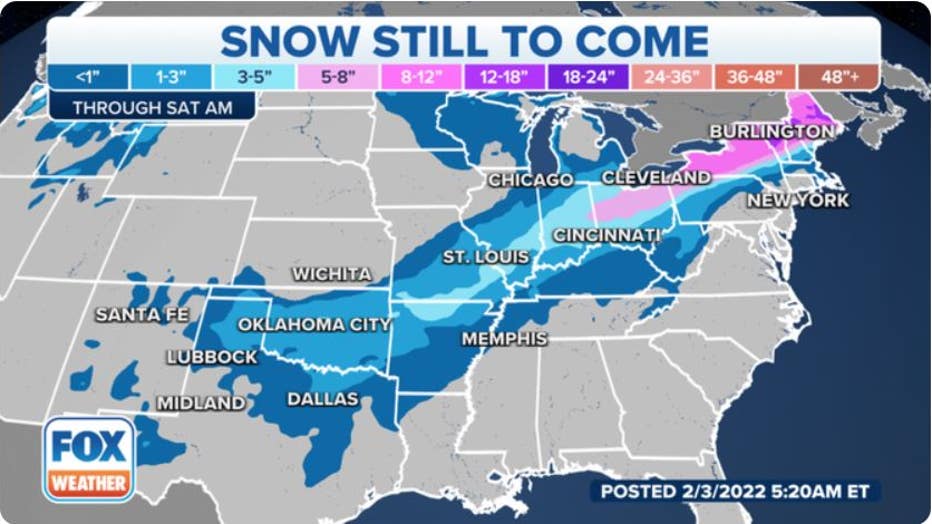 Ice accumulations from freezing rain are likely over an expansive area from North and Central Texas to southeastern Oklahoma, Arkansas, southeastern Missouri, West and Middle Tennessee, the Ohio Valley and portions of the Northeast.

All locations that have a period of freezing rain should see at least a glaze of ice, which is sufficient to create icy roads and dangerous driving conditions. Scattered power outages and broken tree limbs are also not ruled out from North and Central Texas all the way into parts of Pennsylvania, New York's Hudson Valley and New England. 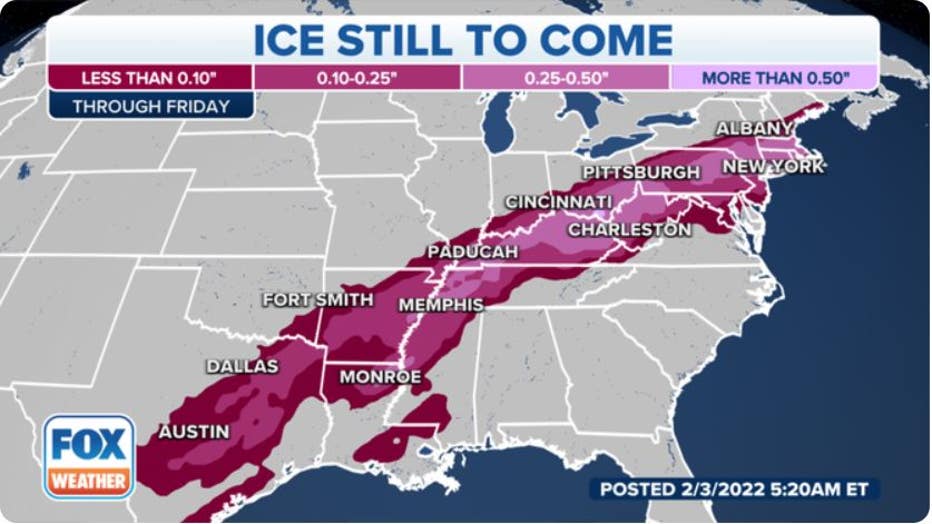 The highest risk for this disruptive ice appears to be in parts of eastern Arkansas, northwestern Mississippi, West Tennessee, extreme southeastern Missouri, far southern Illinois and Indiana, much of Kentucky and possibly portions of southern Ohio.

This zone with the highest threat for disruptive ice includes the cities of Memphis in Tennessee, Louisville and Lexington in Kentucky and Evansville in Indiana. One-quarter to one-half inch of ice is possible in some of these areas, with locally higher amounts not ruled out. 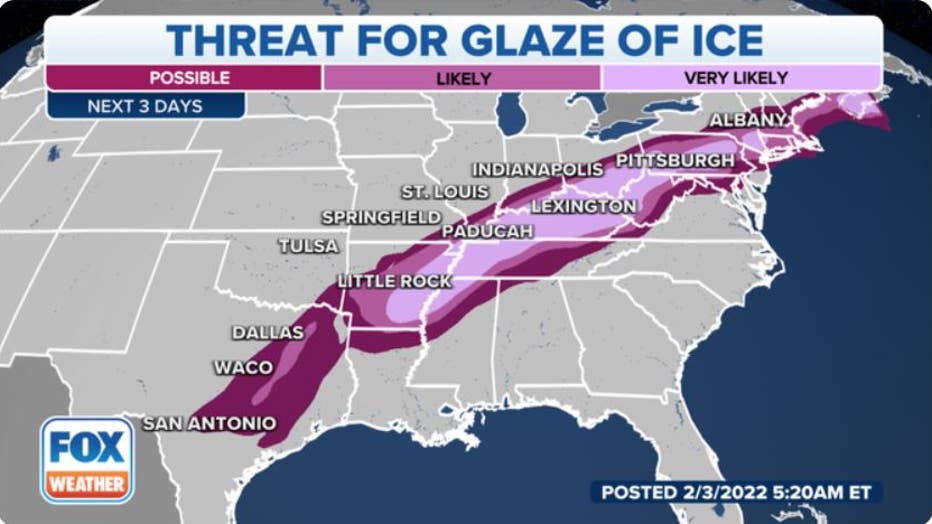 The threat for at least a glaze of ice. (FOX Weather)

This sprawling winter storm got underway Tuesday night and Wednesday in the Rockies and Midwest.

Between 6 and 11 inches of snow fell in the Denver metro area, while up to 22 inches was measured in the higher elevations south and southwest of Colorado Springs, Colorado. 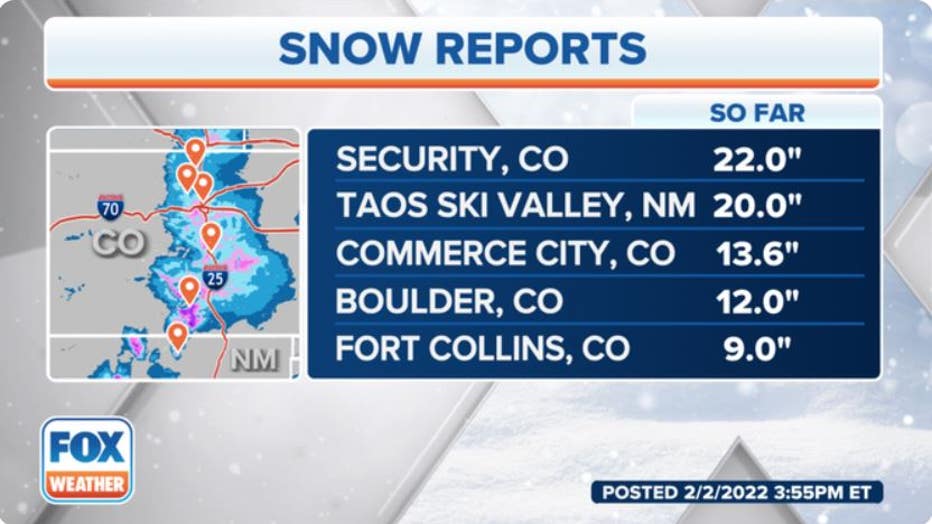 At least 6 inches of snow was reported over a broad area from northeastern Missouri into central and northern Illinois and northwestern Indiana, including portions of Chicagoland.

As of Thursday morning, the top snowfall total in the Midwest was 14.5 inches in Macomb, Illinois. 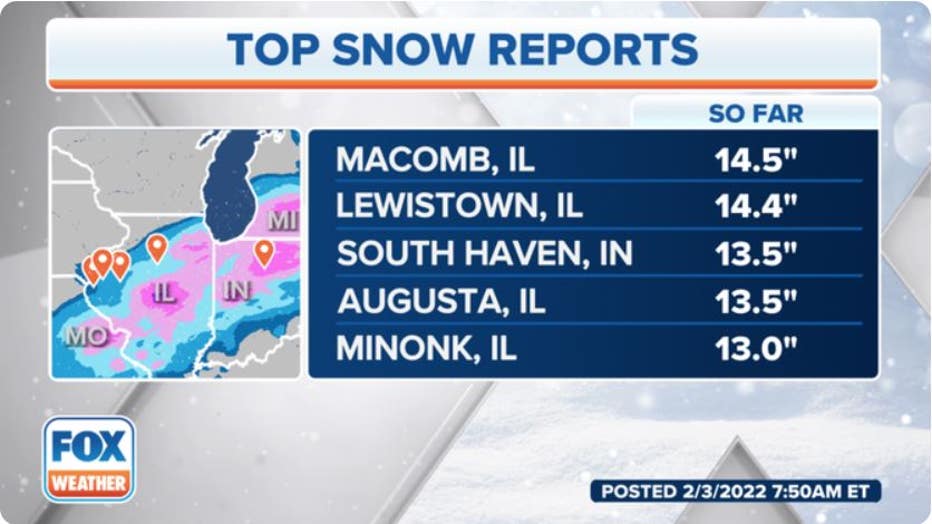 Up to three-tenths of an inch of ice was reported in Altamont, Illinois, from freezing rain on Wednesday afternoon.

One-quarter inch of ice accretion was measured in Preston, Missouri, while other parts of Missouri and southern Illinois recorded 0.15 to 0.20 inches of ice. 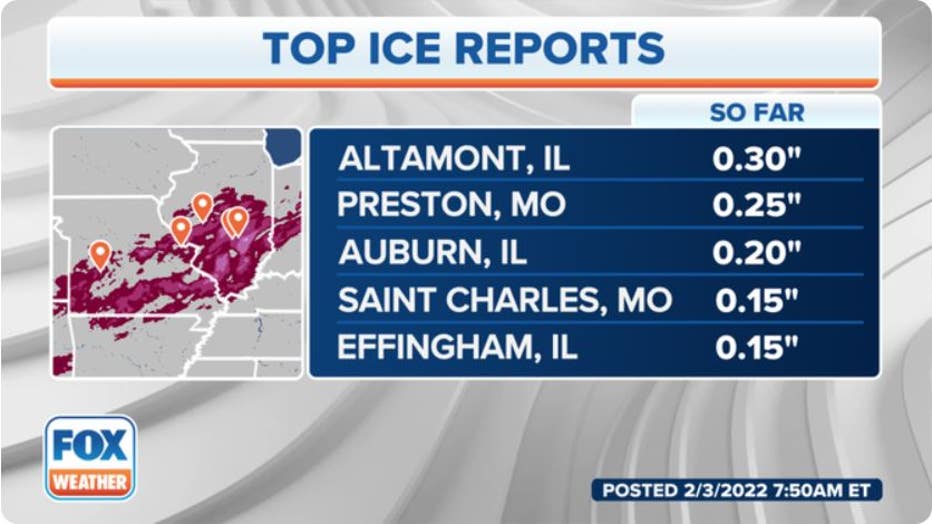