Thousands of people poured into downtown streets on Thursday to catch a glimpse of the Milwaukee Bucks in a parade that celebrates the city’s first NBA championship in half a century.

MILWAUKEE - It was a party unlike anything the city of Milwaukee has ever seen. Thousands of fans lined the streets of downtown on Thursday, July 22 to catch a glimpse of their beloved Bucks in a parade to celebrate the city’s first NBA championship in half a century.

Six police officers on horseback clopped past cheering fans at the head of a procession that included a hook-and-ladder fire truck, occasionally blaring its horn, and open-air buses and flatbed trucks carrying Bucks stars including Finals MVP Giannis Antetokounmpo and Jrue Holiday, as well as the trophy they captured Tuesday night with a Game 6 victory over Phoenix. 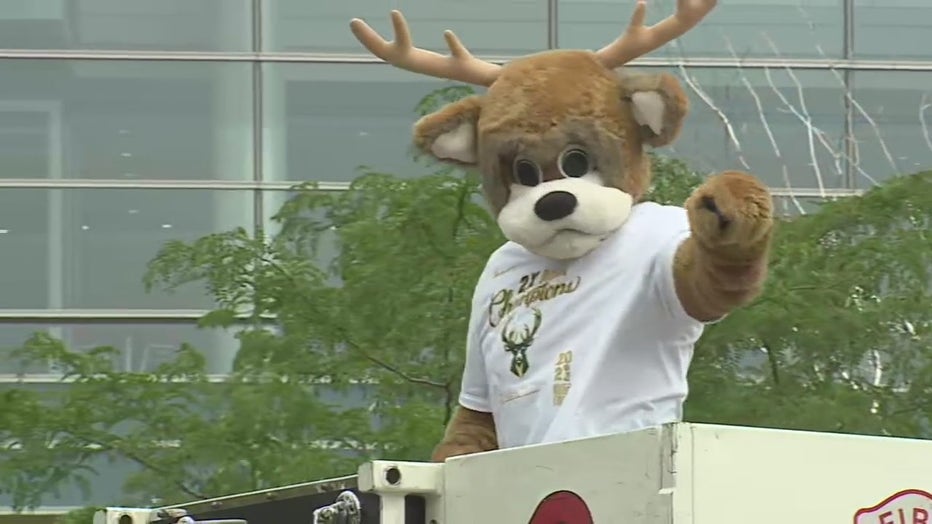 Fans could be heard chanting, "Bucks in 6," an odd but beloved rallying cry with roots in a former Bucks player's fruitless prediction in 2013 that the team would take down the playoffs' top seed at the time.

Bucks fans are out to celebrate

Thousands of people poured into downtown streets on Thursday to catch a glimpse of the Milwaukee Bucks in a parade that celebrates the city’s first NBA championship in half a century.

Antetokounmpo held his son, 1-year-old Liam, atop a bus as fans along the route chanted "MVP!" Later, he shot a basketball into the crowd.

"Milwaukee, we did it baby! We did it!" Antetokounmpo said to a cheering crowd in the Deer District, the area outside the Bucks' Fiserv Forum. "This is our city, this is our city, man, we did it! Unbelievable." 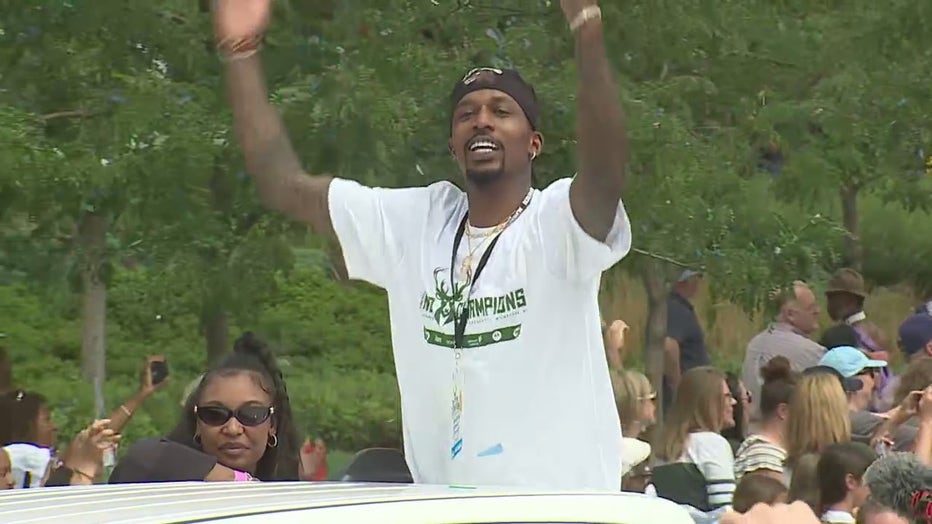 Neil and Rachana Bhatia, both 34 and from suburban Waukesha, brought 1-month-old son Zain to the Deer District, saying they wanted to give Zain an early taste of being a Bucks fan. 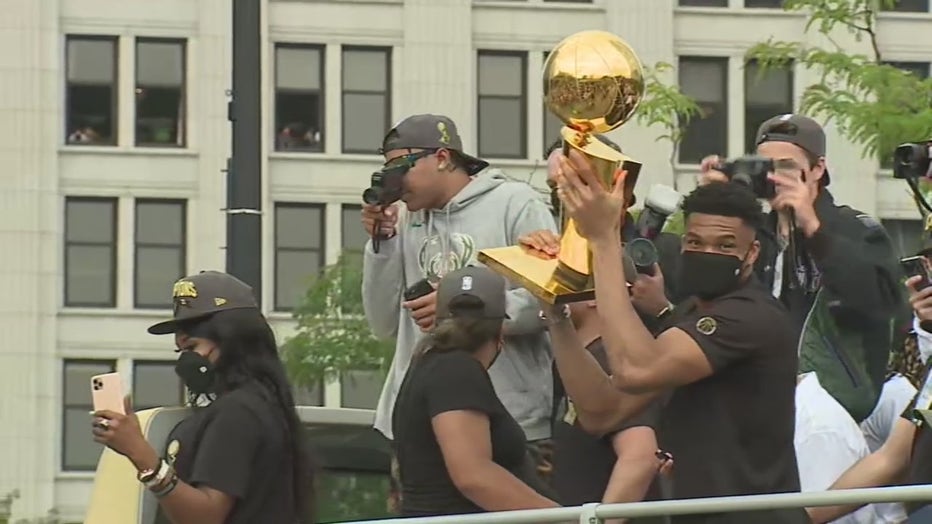 "It unifies the city and puts the city on a global stage. It’s great for the city and the state. It’s just bringing everybody together to celebrate something that hasn’t happened in 50 years," he said.

"The city has had its struggles. What I know is that it’s been a city that’s coming together," said longtime Bucks fan Dameon Ellzey, 45, a Milwaukee native who lives near the arena and was stationed there to see the parade.

The 2021 NBA Champions were celebrated all Thursday long...

Every inch of the one-and-a-half-mile-long parade route was lined with fans wanting to share this moment with the Bucks.

The joy of Milwaukee's first championship in 50 years.

Thousands turned out in downtown Milwaukee to take part in the Bucks championship parade and celebration.

"In my neighborhood, you could hear everybody on their porches screaming," Ellzey said. "Black, white, Asian. In a city like Milwaukee, that’s big."

Milwaukee has long ranked among the most segregated cities in America. Team President Peter Feigin called it "the most segregated, racist place" he’d ever experienced, remarks he later softened. As the Bucks drove toward a championship this year, some people were cheered by the diversity of the massive crowds that gathered in the Deer District to watch the Bucks on big TV screens. 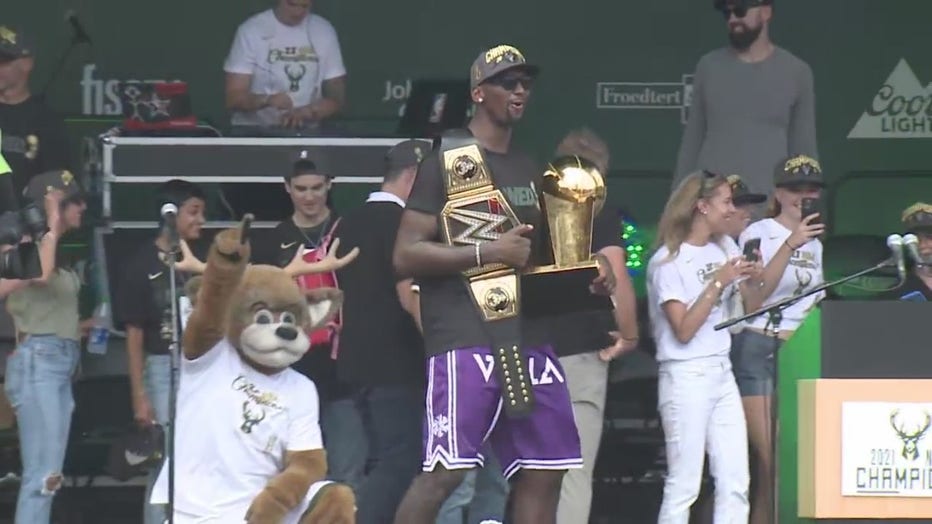 The team’s ascendance has invigorated a Midwestern city far from the league’s more cosmopolitan venues like Los Angeles, Boston or Miami — cities that have traditionally found it easier to attract the game's top players. One reason fans have embraced Antetokounmpo is his loyalty to the team that drafted him eight years ago when he was just 18.

"It’s so awesome for Milwaukee. Oh my God, it is just something else," said Iris Puente. "All the blood sweat and tears this team has put into this championship. It means so much to Milwaukee. I get goosebumps just thinking about it."

"I was in the nosebleeds at 13 years old with the $10 tickets at the Bradley Center. Now to see it turn into this. It’s surreal man," said Noel Patelski. 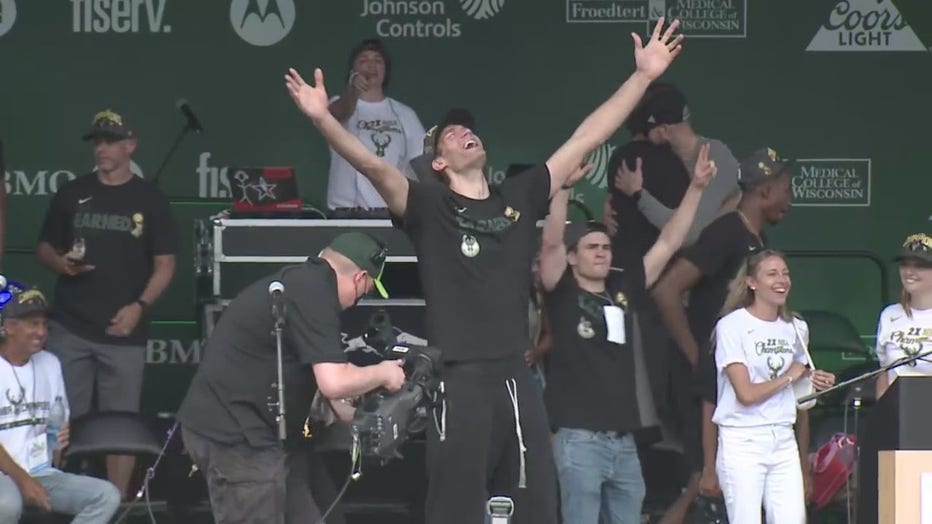 "He recognizes the city and its quality and he resonates with it," Timothy Seymour, 20, said of Antetokounmpo. "He really reflects our work ethic. He works hard. And he reflects how we’re only going to get better."

Police estimated 100,000 people jammed the Deer District for Tuesday night's Game 6. Though the coronavirus pandemic has lessened compared to a year ago, the level of cases in both Wisconsin and Milwaukee County still is rated by the state as high, with daily new cases in the county roughly tripling over the past two weeks to 80 per day. 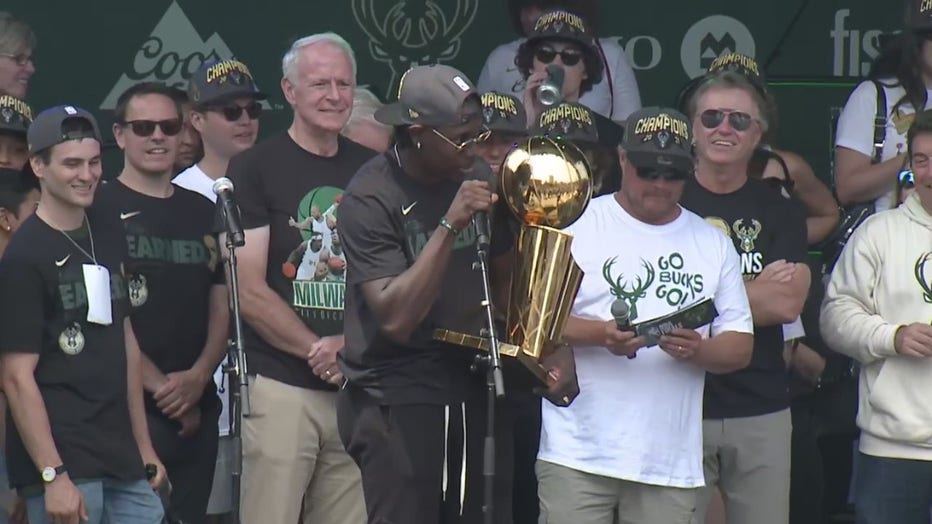 City health officials noted Thursday that announcements of the parade had urged that unvaccinated people wear masks. Few were visible among fans on the parade route or later outside the arena. The city health department said their contact tracing team would closely monitor the event.

"We are concerned," she said. "We know people wanted to be jubilant and celebrate. But we know, half the state is fully vaccinated and half the state is not and I assume the same is true for people in the Deer District and the arena. And I didn’t see half the crowd masked." 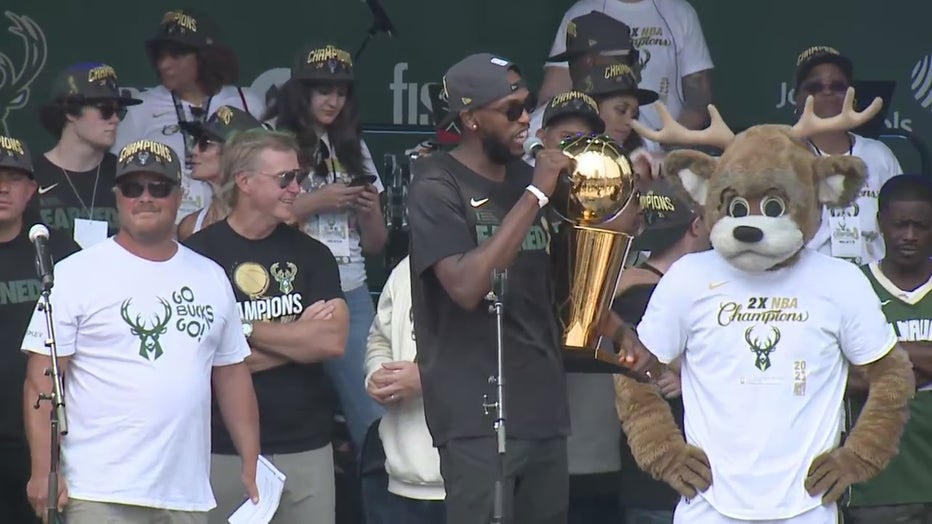 COVID pandemic has made child abuse harder to spot