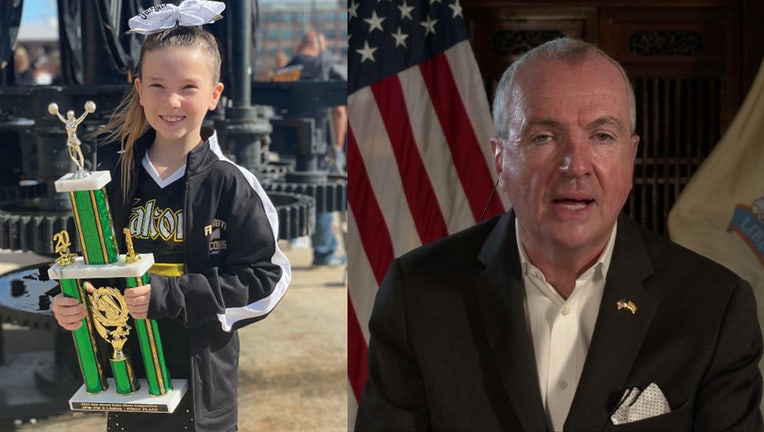 Chelsea Young's daughter, Maci Young, on the left, and Gov. Phil Murphy of New Jersey at right. The student recently expressed her opposition to the N.J. mask mandates and sent her thoughts to the governor. (Chelsea Young)

The family of a fourth-grade elementary school student in New Jersey told Fox News Digital that their daughter, Maci Young, was put into an adjoining room next to the nurse's office recently when the child would not wear a mask at school. After the incident, their daughter was sent home from school that day.

The student had politely declined to put a mask on her face when teachers asked her to do so — but, according to the family, that didn't matter.

Now, after the incident in late January, the student has sent an essay she wrote about mask-wearing to N.J. Gov. Phil Murphy. Among the points she makes in her piece: "I don't want to wear the mask anymore. It hurts and I don't learn a lot now because my teacher keeps telling people to pull up their masks."

As COVID-19 infections have declined across the country, many state and local leaders have been loosening the related restrictions or removing them entirely. In the Garden State, however, kids must still wear masks at school — for now.

"I was trying to stand up for what I believe in," Maci Young, the fourth-grade student at Robert Hunter Elementary School in Raritan Township, N.J., told Fox News Digital this week through her mother, Chelsea Young.

"I didn’t like [being isolated and sent home for choosing not to wear a mask] because I never get in trouble at school," the student also said.

Chelsea Young had instructed her daughter how to respectfully decline wearing a mask while at school — and the girl did exactly as her mother said.

Young said her daughter responded "no, thank you," when a staff member asked her to put on a mask at school. But that led to issues.

Staff members reportedly isolated Maci Young in a room adjacent to the nurse’s office after the student arrived at school on January 25 and politely declined to wear a mask.

Young said the family then received a call from the school telling them to come pick up their daughter, who could be heard crying in the background. Chelsea Young rushed to the school to pick up her child and described the incident as "outrageous."

"There’s a zero-tolerance [policy] for bullying, but the teachers just did that to her. Not because they wanted to, but because they are forced to by our governor," Young told Fox News Digital.

The mom emphasized she did not blame the teachers.

"Maci tried to take a stand for herself. And for a fourth grader, I think she did it extremely responsibly and handled the situation way better than some adults do. But she was punished for that."

"Kids should be able to stand up for themselves, too," Maci Young said.

Fox News Digital asked the school superintendent about staff protocols when students don't wear masks, as well as about this specific situation. The superintendent forwarded a letter with general mandate-related guidance and information that was sent out to district families. Through a spokesperson, she also said the district does not comment "on personnel or student matters."

Chelsea Young said she was told the incident with her daughter would be marked as an unexcused absence in the records. But after checking the school’s Parent Portal on February 15, Young said the incident hadn't been logged as such, as of this writing.

Time to write a letter

After Maci Young was sent home, she was upset about what happened and decided to write a letter expressing her feelings.

She detailed all the reasons she believed mask-wearing was causing her more harm than good.

NJ 3-YEAR-OLD KICKED OUT OF SPEECH THERAPY FOR NOT WEARING A MASK: ‘CATASTROPHIC MORAL CRIME’

The student, who hopes to be an art teacher when she grows up, sent her letter to the Flemington-Raritan School District’s superintendent, Dr. Kari McGann; to her principal; and to the school board.

Her letter was published on February 12 in a local news outlet, TAPInto.

"We are so proud of her," Chelsea Young said of her daughter. "I think she did a great job explaining why she didn’t want to wear a mask."

Younger brother Easton said he, too, is proud of his sister, the family said.

"How she was treated is horrible," Chelsea Young added.

Maci Young’s difficulties with mask-wearing at school began when children in the district returned to a regular, in-person learning schedule this past October.

"My happy, healthy 10-year-old would come home every day and have to lie down because she would have migraines," said Young, noting that her daughter would often fall asleep at the table while doing homework.

"She hasn’t taken a nap since she was 3!" Young added.

Young said she contacted their pediatrician about her daughter’s symptoms.

Based on her mother’s description of the symptoms, the doctor’s office suggested the family come in, so that the doctor's office could provide a note excusing the child from wearing a mask.

But the next morning, the doctor’s office declined to write the exemption, Young told Fox News Digital, citing newly issued guidance from the governor’s office that deemed kids with symptoms like Maci’s ineligible. (There is no independent evidence that the masking caused the student's headaches.)

‘Gets to be a normal kid again’

On Monday, Feb. 14, at Flemington-Raritan School District’s board meeting, the board voted on a change to its mandatory indoor masking policy.

Chelsea Young and her daughter were present at the meeting but did not get to speak (the comments period of the meeting went long).

Barring any executive order or state mandate to the contrary, mask-wearing at FRSD schools will soon be optional — beginning March 7 — according to a letter about the issue that Superintendent McGann forwarded to Fox News Digital.

In accordance with the CDC’s guidance, however, students will still be required to wear masks when they ride the bus to and from school. On Wed., Feb. 16, 2022, during a briefing, CDC Director Rachel Walensky said, "We are assessing the most important factors based on where we are in the pandemic, and we'll soon put guidance in place that is relevant and encourages prevention measures when they are most needed …"

Mom Chelsea Young said she considers the imminent changes in New Jersey a partial win. For her daughter, however, it's larger than that. "This is a win. [She will] get to be a normal kid again," said the mom.

The fourth grader said that one of her teachers came up to her, gave her a hug, and told her she "did an incredible job [with her letter]."

Said Chelsea Young about her daughter, "Maci feels a lot better knowing she can express herself in the right ways and have the support of her teachers."

"For parents who still want their children to wear masks, that is your choice, but it’s time for my children to have a choice as well," Young also said.

Asked how she thought her peers would respond if masks were made optional in school, Maci Young said, "I think most of them would have their masks off and be happy about it."

She recently competed in a cheerleading competition in Orlando, Florida. Her team took third place. During the competition, none of the cheerleaders had to wear masks.

Here is a portion of Maci Young's letter, below, which she sent to Gov. Murphy.

The letter was shared with Fox News Digital and is reprinted below, with the Young family's permission. (As of this writing, the family has not heard back from the governor's office. They were told that once the letter was received, it would take "7-10 business days" for someone to contact them, said Chelsea Young.)

Maci Young, from her essay: I think kids should have a choice if they should wear a mask. One reason is because they make it very hard to breathe. I get headaches every day and I come home from school and have to lay down. When I come home I complain to my mom and dad that my head hurts and my ears from the mask pulling on them.

Sometimes the insides of my masks are dirty and that can't be healthy for me. Our teachers teach us about health and how washing our hands keeps germs away and eating healthy food keeps us healthy …

My second reason is that most schools around the United States do not have to wear a mask so why should I have to and get yelled at by my teacher that I am not wearing my mask the right way?

NJ MOM, FORCED TO GET VACCINE BEFORE WEDDING, WINDS UP IN ER

I don't like being separate from my friends because then I feel like people are looking at me.

The last reason is that I don't think these masks work. Kids in my class have still had to quarantine for getting sick and we have had a lot of them. If they are not stopping us from getting sick, then why are we wearing them? …

I used to not ask a lot of questions, but my teachers have taught me that asking questions helps me learn more. I complete all of my school work, I participate in class and help my teachers if they need help. I don't get in trouble and today when I did I was really upset.

I hope that one day school will go back to being fun because I am only a kid once.