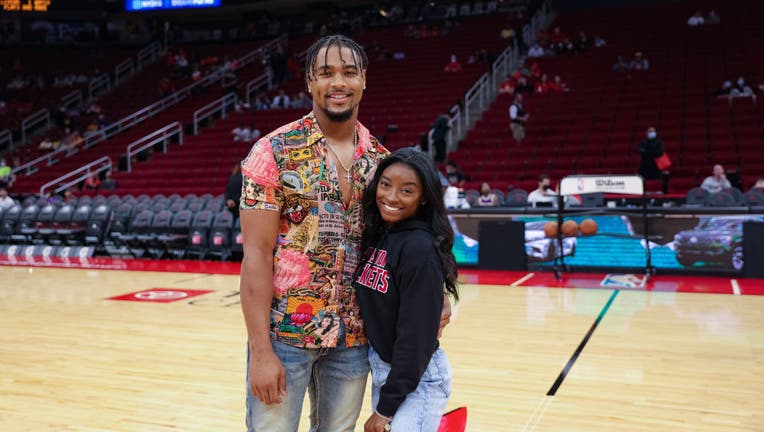 HOUSTON, TEXAS - DECEMBER 28: Simone Biles and Jonathan Owens attend a game between the Houston Rockets and the Los Angeles Lakers at Toyota Center on December 28, 2021 in Houston, Texas. NOTE TO USER: User expressly acknowledges and agrees that, by

"I can’t wait to spend forever & ever with you, you’re everything I dreamed of and more! let’s get married FIANCE," the excited gymnast posted on Instagram.

Biles, 24, and Houston Texans safety Owens, 26, have been dating for nearly two years.

Owens took a knee in a set of photos the most decorated gymnast of all time shared on Twitter and Instagram. They were in a gazebo, and Biles was dressed all the way up in a black mini dress and heels. Owens beamed as he placed a substantial rock on her finger.

'We have been failed': Simone Biles testifies about FBI's Larry Nassar investigation | LiveNOW from FOX

More engagement photos had the two celebrating with a kiss at dinner and a close-up of the two holding hands, displaying Biles’ oval-shaped diamond ring.

"Ready for forever with you," Owens responded in her comments on Instagram — heart emoji in place.