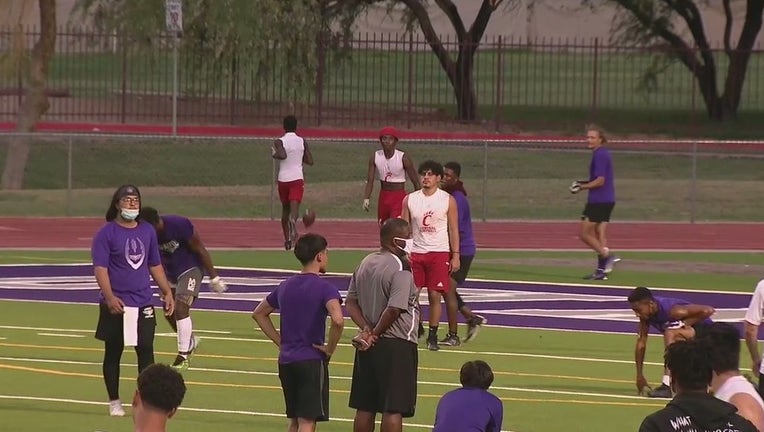 LAVEEN, Ariz. - Phoenix police officers spent their evening out at Cesar Chavez High School, but for a good reason: they're joining students on the football field.

Their goal? To give students a positive association with police.

It was an important night, not just for the students in the tournament, but for all those who were able to attend the forum and learn from one another.

These players at the Cesar Chavez High School say they’re determined to up their game.

Students played in front of officers from the Phoenix Police Department during a 7-on-7 football tournament on June 16.

"Typically when this age group has contact with law enforcement it’s a bad situation," said Phoenix PD commander Brian Freudenthan. "Either they are a victim in something, or they’re involved in something. So we want to create these opportunities where things are good."

The department, along with the Arizona Cardinals, partnered with Fulfillment In Training (FIT) to host and sponsor the 7 on 7 tournaments.

"Realizing what they were doing with fitness and how that connects with our community," said Isaac Gaspar, community programmer. "Very easy way for everyone to get together and actually be a community."

Prior to the big game, the students attended a forum called "Healing Starts Here." It was an opportunity for students to talk with officers and other city officials about social justice.

"Helping us to understand what to expect from a police officer and what to do in that scenario," Payne explained.

At the end of the day, organizers say they want these kids to know that these people in uniform are more than just officers - they are leaders, helpers.

"The biggest thing that they come out realizing [is that] they are really here for us, and that’s what we are trying to do," Gaspar said. "For them to understand that it is not us versus them, it is all of us together."

The second tournament at Cesar Chavez High School will be on June 30.