First Lady Jill Biden was on hand to receive the White House Christmas tree on Monday, November 22, kicking off the holiday season for the first couple. Credit: The White House via Storyful

The holiday season has opened in full swing at the White House.

The two events set off a White House holiday season that is expected to be much more festive this year, as public health officials encourage those vaccinated against COVID-19 to get together in person, instead of begging Americans to stay home, as they've done for holidays past.

The holiday tree was presented by the father-and-son team of Rusty and Beau Estes of Peak Farms in Jefferson, North Carolina — a three-time winner of the National Christmas Tree Association’s annual contest. The winner gets to present its official tree to the White House.

Son Hunter Biden, his wife, Melissa, and their toddler, Beau, were among a sizable group of White House aides, guests and others who braved crisp winds to watch the brief ceremony marking the start of the administration's first Christmas in the White House.

The first lady broke off a sprig from the tree and gave it — and a big smooch — to her grandson.

"Look how beautiful this is," she said of the 18 1/2-foot (5.6 meter) Fraser fir that was delivered by wagon to her Pennsylvania Avenue doorstep by Clydesdale horses named Ben and Winston. 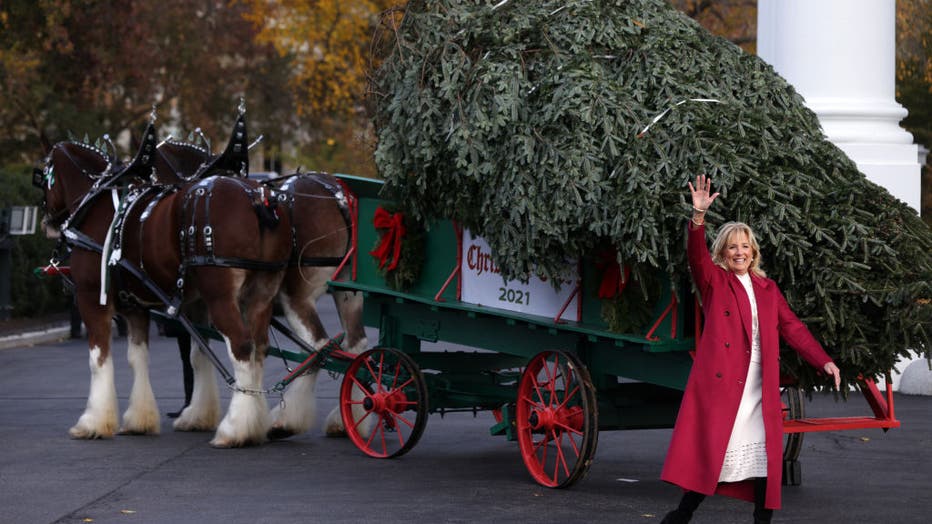 WASHINGTON, DC - NOVEMBER 22: U.S. First lady Jill Biden waves after she receives the official White House Christmas Tree on the North Portico of the White House on November 22, 2021 in Washington, DC. The eighteen-foot Fraser fir was grown in North

The tree will be decorated in the coming days and displayed in the Blue Room, a tradition that dates back to President Dwight D. Eisenhower, after a chandelier is removed so it can be tethered to the ceiling for safety. White House grounds superintendent Dale Haney went to the farm in October to pick out a tree. Peak Farms also supplied the official White House tree in 2008 and 2012.

The White House Christmas decorations will be revealed on the Monday after Thanksgiving, the first lady said.

Jill Biden was joined by a D.C. Army National Guard family to honor the National Guard's role in responding to the COVID-19 pandemic, her office said. She has been using her new role to help highlight and rally support for military families from across the country through an initiative named Joining Forces.

The trip Monday to Fort Bragg was also part of the initiative, which was launched by Dr. Biden and then-first lady Michelle Obama in 2011. The initiative calls upon all Americans to support service members, veterans, and their families through wellness, education, and employment opportunities.

At Fort Bragg, the meal was held in a large hanger replete with pumpkin and pine cone centerpieces for about 250 servicemembers and families. Jill Biden spoke first, stepping out from behind a table to walk the room, talking to families about their late son, Beau, who served in the Delaware National Guard, and how she understood how hard it was to be away during holidays. She talked about how proud she was of the troops before introducing the president, who echoed her praise.

"You do so much, your families do so much," President Biden said. "You’re the finest military the world has ever seen … and I’m so damn proud to be associated with you." 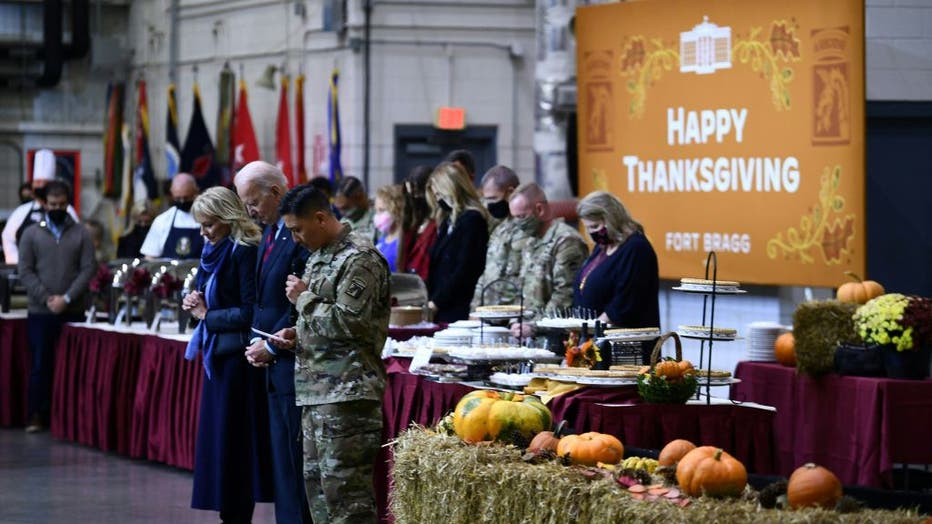 After a quick prayer from the chaplain, the Bidens walked behind the serving tables, donned gloves and aprons and started dishing out the meal to waiting troops. Jill Biden scooped mashed potatoes, the president the stuffing. The troops were handed chocolate chip cookies with the presidential seal, and the long table was full of food including chocolate cakes.

On Tuesday, the Bidens plan to participate in a to-be-announced local service project before resuming their family tradition of celebrating Thanksgiving on the Massachusetts island of Nantucket. Biden put tradition on hold last fall over COVID-19 concerns and hunkered down over Thanksgiving dinner in Delaware with just his wife, their daughter and their son-in-law.

"Last Thanksgiving, for the first time, it was just the four of us," Biden said earlier this month as he commented on the nation's progress against the coronavirus.

The public White House holiday tours are a popular staple every holiday season. Volunteers from across the country work diligently in late November to get the White House ready.

Tours are still temporarily suspended this year because of COVID-19.

The White House will officially welcome the holiday season with the traditional lighting of the National Christmas Tree on Dec. 5.