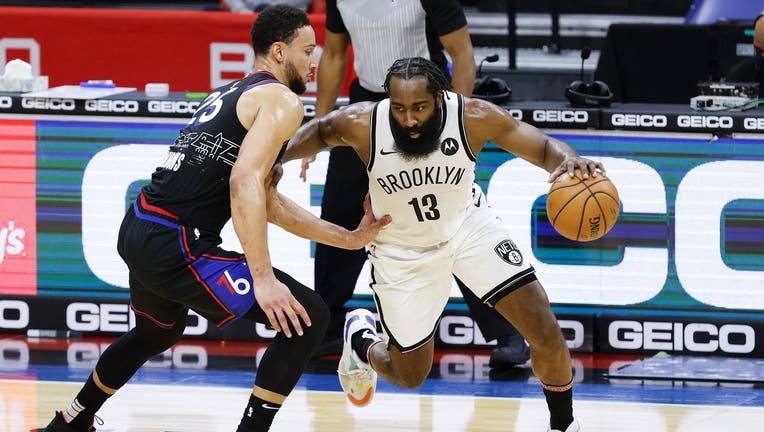 PHILADELPHIA, PENNSYLVANIA - FEBRUARY 06: James Harden #13 of the Brooklyn Nets drives against Ben Simmons #25 of the Philadelphia 76ers during the third quarter at Wells Fargo Center on February 06, 2021 in Philadelphia, Pennsylvania. NOTE TO USER:

PHILADELPHIA - Ben Simmons got his wish, a trade out of Philadelphia. The 76ers got their second superstar, with James Harden coming over in a blockbuster multiplayer trade with the Brooklyn Nets.

The Sixers sent Simmons, the disgruntled one-time franchise cornerstone, who demanded a trade last summer, guard Seth Curry and center Andre Drummond to the Nets in a deal for the bushy-bearded Harden.

The move came just five days after coach Steve Nash said the Nets wouldn't trade Harden and only 13 months after they acquired the 2018 NBA MVP to play with Kevin Durant and Kyrie Irving.

But Harden could have left this summer as a free agent and the Nets decided it wasn't worth the risk to wait, ending their Big Three experiment after the trio played only 16 games together.

"The decision to trade James was a difficult one, however after recent discussions with him and his representatives we felt that this move would be best for all involved, as it better positions us to achieve our goals this season and in the years ahead," Nets general manager Sean Marks said. "We appreciate everything that James has done for our organization both on and off the court."

Simmons did not play this season for the Sixers in the wake of a trade demand centered largely around hurt feelings coming off last season’s playoff loss. Simmons averaged 15.9 points, 8.1 rebounds and 7.7 assists over four seasons with Philadelphia, which drafted him out of LSU, where he played only one season.

His defining moment as a Sixer came when he passed up a wide-open dunk against Atlanta in the second round of last year’s playoffs that would have tied the game late in Game 7.

The end of Simmons' time in Philly came down to this: He was stung by comments made by coach Doc Rivers and Embiid in the aftermath of the Game 7 loss and how he shouldered the blame for the Sixers’ playoff woes.

His refusal to shoot beyond 15 feet — he is a 5-of-34 career 3-point shooter — and his postseason failures at the free-throw line have seemingly outweighed his playmaking ability and a spot last season on the All-Defensive first team.

Simmons made a surprise return to the Sixers shortly before the season opened, but was promptly kicked out of practice and suspended for one game. The punishment didn’t matter, the No. 1 pick of the 2016 draft had no intention of ever playing. He later cited mental health concerns.

Harden was set to miss his fourth straight game Thursday with a hamstring injury while trade rumors intensified. He has averaged 25.0 points, 5.6 rebounds and 6.7 assists with Brooklyn, Houston and Oklahoma City.

The Nets acquired the three-time scoring champion from the Houston Rockets in a deal last January, with the idea that Harden, Durant and Irving would be too potent to stop. The Nets loaded up for a title run with three of the highest-paid players in the league but a championship run with them never materialized.

Harden and Irving were both hurt last year in the playoffs, and the Nets lost in the second round to eventual champion Milwaukee. With Irving not joining the Nets until December and Durant injured in January, the Nets got only two games out of their Big Three this season.

They are 2-10 since Durant sprained his left knee, an injury that could keep him out until after the All-Star break. With Irving ineligible to play in home games because he is not vaccinated against COVID-19 as mandated by New York City, it placed a heavy burden on Harden. Harden can become a free agent after the season, though he could pick up his $47.3 million player option.

Simmons entered this season with four years and $147 million left on his max contract.

The 76ers are getting an MVP-worthy year out of Embiid, and team President Daryl Morey — who was in the front office with Houston when Harden played for the Rockets — made the deadline deal to ensure the Sixers have plenty for the championship push. The Sixers had 20-1 preseason odds to win the NBA championship but those fell to about 7-1, according to FanDuel Sportsbook.

Embiid leads the league in scoring with 29.4 points and has scored at least 25 points in 30 straight games. The pressure was on in Philly not to waste a season of his prime.

Morey made the trade while holding on to Tyrese Maxey and Matisse Thybulle, two young core players the Sixers believe can help snag them the top spot in the East. The Sixers were 1 1/2 games out of first place in the Eastern Conference entering Thursday's action. They play consecutive home games on Friday and Saturday.

Sixers fans might want to start saving their cash for the March 10 game against the Nets. Tickets on the secondary market were asking for well above $1,000 for lower-bowl tickets and almost $200 for standing-room tickets at Wells Fargo Center.

Less than two hours after the trade, a billboard went up along Interstate 95 welcoming Harden to Philadelphia. The billboard featured a silhouette of Harden’s face that read "The Beard is Here!"

Curry — Rivers' son-in-law — gives the Nets outside shooting they have missed with Joe Harris out following ankle surgery. Drummond could start or play a key role off the bench for a team that has mostly played small.

"For us, we just look forward and get excited about what the next chapter looks like," Nets coach Steve Nash said Thursday evening before Brooklyn played at Washington. "Just be ready to adapt, and fortunately for us we’ve had plenty of experience adapting."

The fresh start for the deal's big stars also includes new uniform numbers. Harden's 13 is retired in Philadelphia for Wilt Chamberlain, and Simmons' No. 25 was retired by the Nets for Bill Melchionni.