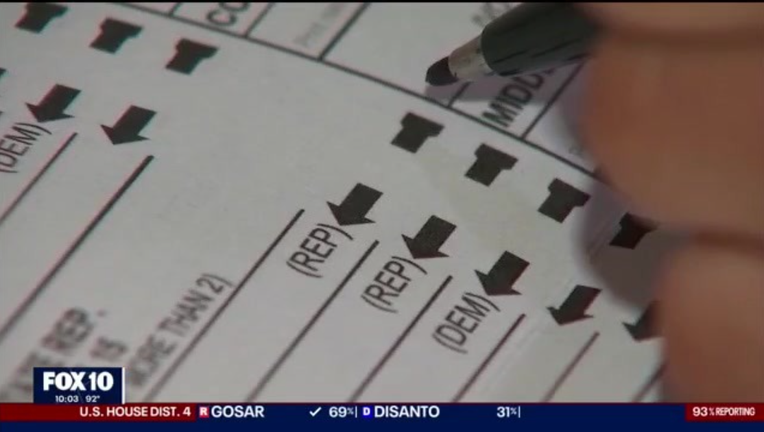 Arizona ballot being filled out (file)

PHOENIX - An Arizona election bill to purge inconsistent voters from the popular permanent early voting list is in limbo after the state House took the highly unusual step of cutting off debate on April 1.

The measure is one of several Arizona bills that would reshape the election procedures in a state that has become one of the most closely contested presidential battlegrounds. Former President Donald Trump and his allies have aggressively pushed disproven or unsupported allegations that Trump's loss here was marred by fraud.

It's part of a broader national fight over voting rights in the wake of the 2020 election.

The Arizona bill, SB1485, would remove people who don’t return their mail ballot for two consecutive election cycles from the permanent list, which allows voters to automatically receive a ballot before each election. About 75% of Arizona voters are on the list. Affected voters would get a postcard asking if they want to remain on the list, and would be removed if they don’t respond.

About 200,000 voters sat out the primary and general elections in 2018 and 2020 and would be eligible for removal, according to data from the secretary of state's office.

Democrats say the measure would disenfranchise voters, with an especially strong impact on people of color. Republicans say it would affect only people who've shown they're not interested in voting by mail.

Republican House Speaker Rusty Bowers did not explain his decision to abruptly cut off debate, but it suggests at least one Republican was not going to support the bill. With a slim 31-29 majority, the GOP must be united to pass legislation without Democratic support.

A spokesman for Bowers, Andrew Wilder, said there will be discussions about amending the bill, and he expects it to come back to the House floor in the future.