Stuart Paul and Jeff Shugars adopted Azra, a 2-year-old blue pit bull, in 2009, just 24 hours before she was scheduled to be euthanized.

"We instantly got nothing but kisses from her after they said she was aggressive," Shugars told FOX 13. "It's amazing the reputation pit bulls have so we're trying to change that." 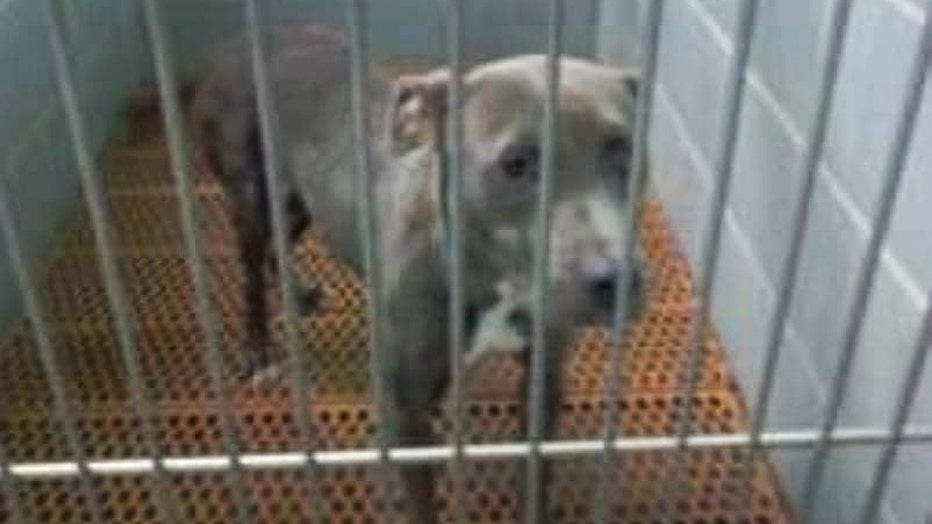 Azra in the shelter, one day before she was set to be euthanized

A few years later when their other dog passed away, Stuart and Jeff went back to Animal Control and rescued Pearl, a white pit bull.

"It took us a few days to realize we adopted her two years to the day after we found Azra, so it's almost like they were meant to be sisters," Paul said.

Instantly, Azra and Pearl were inseparable, both at home and on their daily walks. 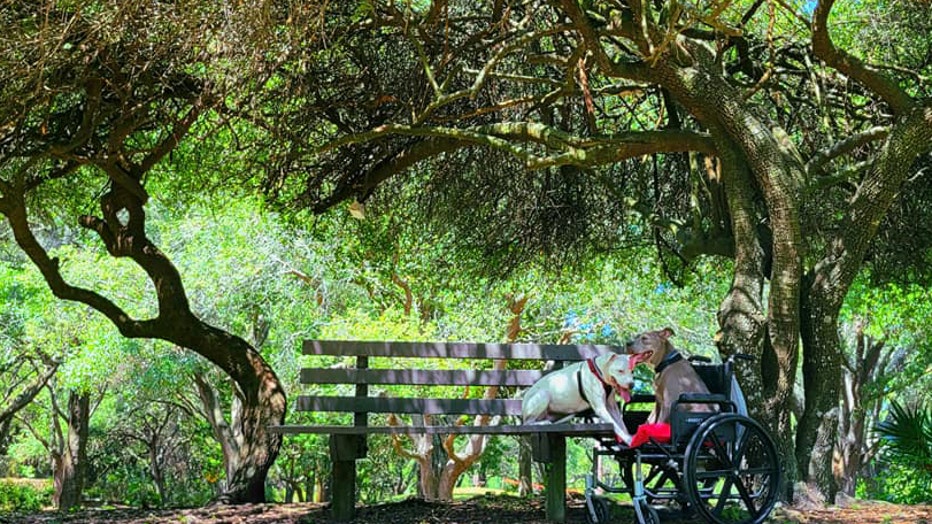 Azra and Pearl sharing the shade of a leafy tree in St. Pete

Stuart and Jeff vowed to show them at least a sunrise or sunset every day, snapping a photo of each trip, sometimes even dressing them in costume and they could not believe the reaction online when they started sharing them on Facebook.

"Every time we go out, we have someone run up to us and tell us how these pictures make their day or helped pull them through the pandemic," Stuart said. 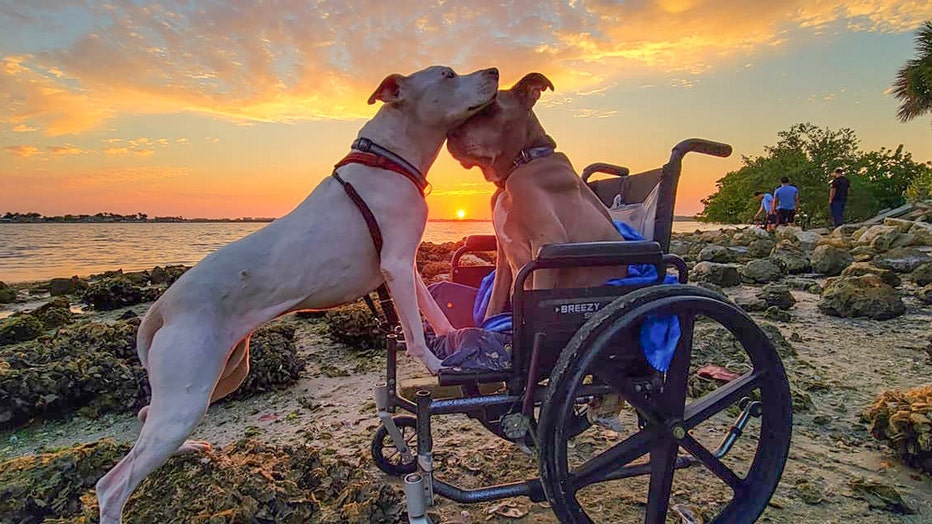 Pearl and Azra snuggling by sunset

Their photos captured the unmistakable affection they have for one another. Their heads are often leaning into one another and sometimes their paws are on top of one another.

"Now we can't go anywhere in St. Pete without being stopped and recognizing them," Shugars said. 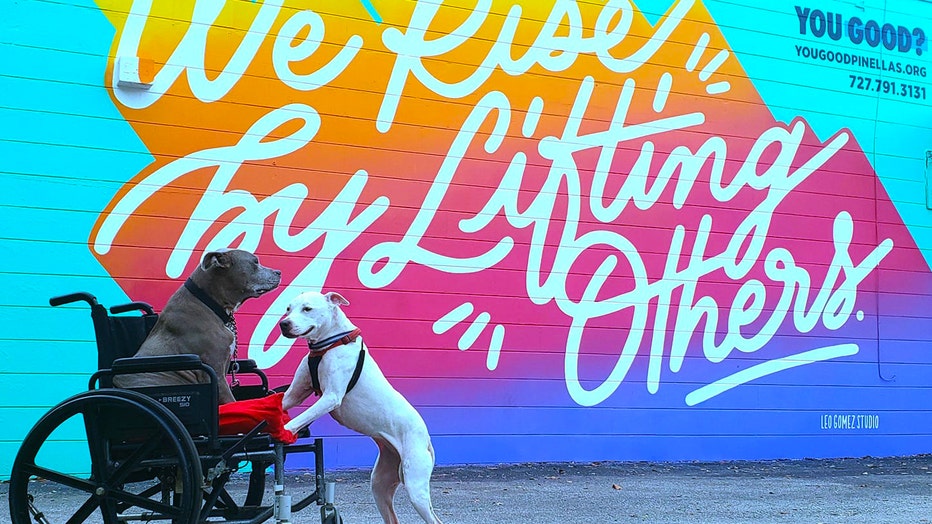 Azra and Pearl at St. Pete's "We Rise by Lifting Others" mural

But as Azra's hips and her heart started to weaken, Stuart turned the walks into rides by getting Azra a wheelchair. And the photos – with the wheelchair - took on a whole new meaning of inclusion and commitment, both in the frame and behind the camera.

"She had patience with me," Stuart said. "She sat around all day every day while I was at work so I can't imagine not giving that back to her." 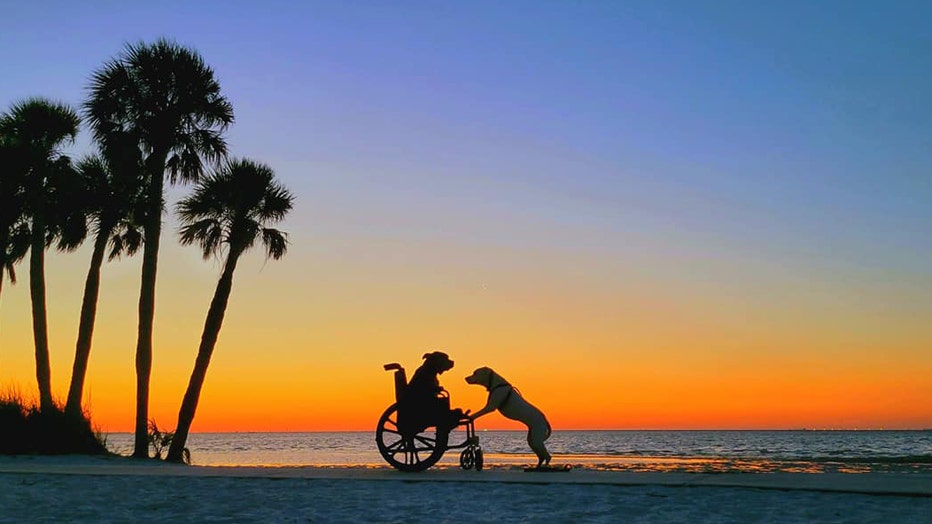 The photos have garnered the most attention in the "I Love St. Pete" Facebook page, where one user commented that she was grateful that the photos have helped her husband cope with depression.

Another said she is very close to the last days of her life on earth and knowing that these dogs exist to inspire humanity makes her heart happy.

Stuart says comments like that recharge his soul every single day. A comforting thought knowing, due to Azra's deteriorating health, their story will soon have an ending, but their story will long live on. 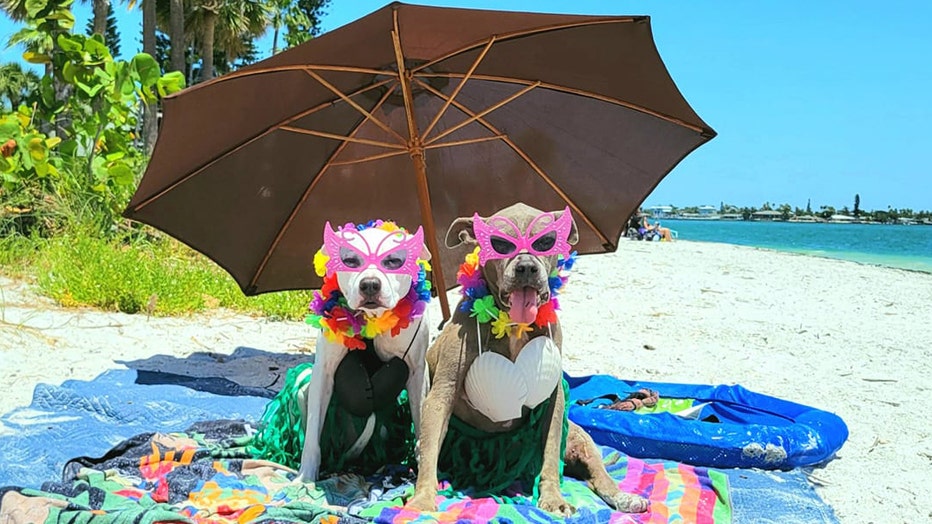 EDITORS NOTE: Not long after our interview, Azra crossed over the rainbow bridge. Stuart and Jeff tell FOX 13 News a children's book may be in the works and that they also intend to go back to animal control and rescue another dog soon.

LINK: To see all of Azra and Pearl's photos, visit their Facebook at https://www.facebook.com/azra.pearl.5

See even more of Azra and Pearl's photos here:

Rescue dogs Azra and Pearl share a special bond that’s documented in daily photographs of their walks around St. Petersburg.