A Phoenix woman is making a name for herself by selling her "amazing finds" online. While doing so, she can pay off debt and provide for her family.

PHOENIX - A Phoenix woman is making a name for herself by selling her amazing finds online.

What started out as a passion for fashion became a way to pay off tens of thousands in debt, and now a bustling side hustle.

From high-end luxury items to more affordable pieces, they are all part of Amy Hardy's inventory at AmyAZingfinds.

Hardy started her business nearly two years ago, reselling clothes, shoes, bags and jewelry on Poshmark and eBay, even posting on Instagram.

"The truth is when you're busy and have a family, you just acquire random expenses, so I just had to figure out OK, if I'm going to have these expenses, I need a way to pay for them," said Hardy.

Hardy, who loves to shop for deals, was often asked by family and friends to find them one, and that's when the idea to turn her finds into a business really took off.

"These are Tory Burch shoes. These are in really good condition. They've never been worn, they're very popular, so this is something I pick up. I'm gonna buy these today for $29. I know that I can at least double my money," said Hardy.

Her rule of thumb is to buy items that double her money. While shopping, Hardy found some Frye leather boots that retail for more than $300. She bought them for under $10 at Goodwill.

And then, there was a J.Crew bag.

"This is a J.Crew bag. Same thing, this is real leather. The bag is in good condition, I know I can double my money on those. This is another item that would be an amazing find," said Hardy.

Nelson says while someone like Hardy profits on the treasures that stock store shelves, so does the community. 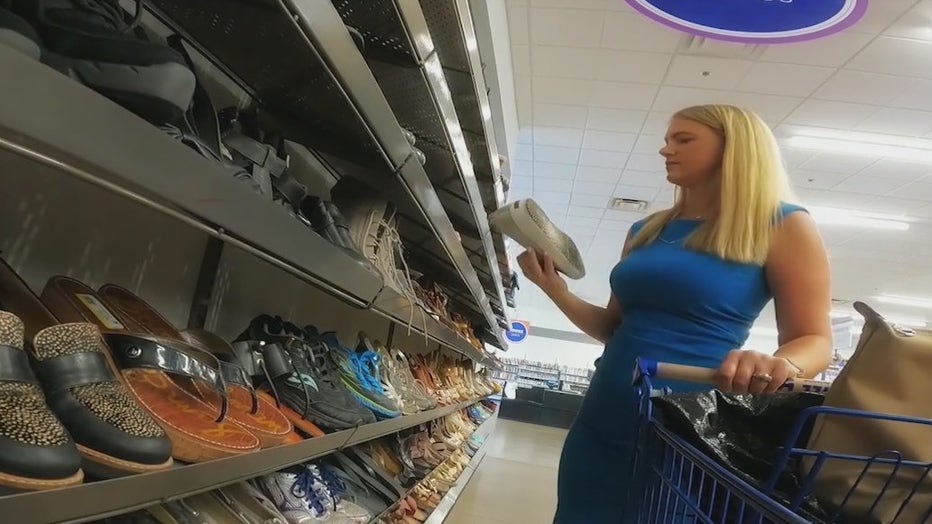 "Maybe you're donating them back. You're giving a new life for someone else to be able to buy in our stores and support, right here in our community, our mission to help people find employment," said Nelson.

"If you go into it with the mentality that you have a treasure that you're going to find that, I know like helps me a ton. It's like your mindset. I usually just let the items find me. I'm just hyper-focused on finding items," said Hardy.

Hardy relies on her fashion savvy when she goes through the racks at any store. She watches people studying the trends, and she knows what sizes, brands and styles sell well. Using coupons and discount codes for the best deal guarantees more bang for the buck with resale.

"The more that I shared about, like, hey, I got this dress for a dollar. I bought these shoes for $5, people just were so excited by that," said Hardy.

Hardy is motivated enough to get up at 5 a.m., hours before she gets herself ready for her full-time job and two kids ready for school. She picks five items every day to sell.

The sales would kind of just roll in throughout the day. I don’t have to do anything, and then at the end of the day, after my kids go to sleep, I get on my orders and I put them in the front door, and the post office just picks them up. I don't even have to be around. It became very much a part of my routine, and very easy and also just lucrative, in the sense it motivated me to, just like, keep getting up if I knew that I had orders to pack up and get ready," said Hardy.

Hardy has to spend money to make money, but she says it is paying off.

"I probably profit about $5,000 a month, and then I use that money to support my family, then just paying off," said Hardy. "Like, I paid off my car. I pay for all my kids' stuff with it and just use it for us to do fun things as a family."

Hardy's advice for anyone looking for an amazing find of their own: start small, put yourself out there, put in the work, and never pass up a deal.