Dates to know for mailing packages in time for Christmas

LIBOURNE, France (AP) - Jim, from Taiwan, slipped a face mask inside the greeting card he sent to Santa and marked “I (heart) u." Alina, 5, asked in her Santa letter written with an adult's help that he please use the front door when he drops in, because the back door is reserved for Grandma and Grandpa to minimize their risk of contamination.

And spilling out her heavy little heart to “Dear Father Christmas,” 10-year-old Lola wrote that she is wishing “that my aunt never has cancer again and that this virus no longer exists.”

“My mother is a care-giver and sometimes I am scared for her,” Lola explained, signing off her handwritten letter with, “Take care of yourself Father Christmas, and of the Elves.”

The emotional toll wrought by the pandemic is jumping off pages in the deluge of “Dear Santa” letters now pouring into a post office in southwest France that sorts and responds to his mail from around the world.

RELATED: Here are the USPS deadlines to get a package to arrive by Christmas

Arriving by the tens of thousands, the letters, notes and cards — some mere scribbles, other elaborate labors of love in colored pens — are revealing windows into the tender minds of their young authors, and of adult Santa fans also asking for respite and happiness, at the tail end of a year of sickness and tumult.

Like this letter from young Zoe, who limited her requests to a music player and amusement park tickets because “this year has been very different from others because of COVID-19.”

“That’s why I am not asking you for many thing(s) to avoid infection,” Zoe wrote, signing off with “Merci!” and a heart.

In theory, and often in practice, any letter addressed "Pere Noel" — French for Father Christmas — and slipped into any post box around the world is likely to wend its way to the sorting office in France's Bordeaux region that has been handling his mail since 1962. Toiling out of sight among vineyards, his secretariat of workers (who call themselves “elves”) spends the months of November and December slicing open envelopes decorated with hearts, stickers and colors, and spreading Santa magic by responding on his behalf.

From the first letters opened at the secretariat from Nov. 12, it quickly became apparent how the pandemic is weighing on children, says the chief elf, Jamila Hajji. Along with the usual pleas for toys and gadgets were also requests for vaccines, for visits from grandparents, for life to return to the way it was. One letter in three mentions the pandemic in some way, Hajji says. 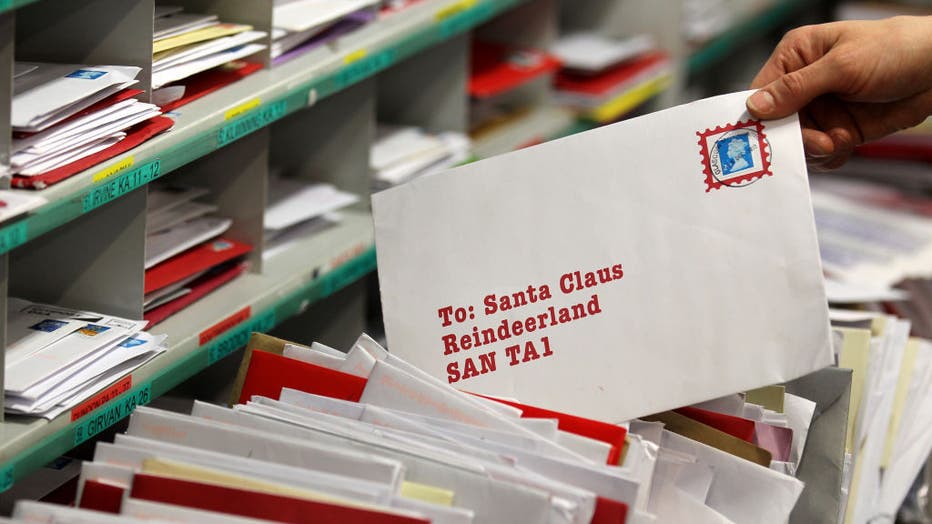 Royal Mail postal worker Helen Cameron sorts mail, including a letter addressed to Santa Claus at the Glasgow Mail Centre in Springburn on what is expected to be the busiest week of the year. (Photo by Andrew Milligan/PA Images via Getty Images)

“The kids have been very affected by COVID, more than we think. They are very worried. And what they want most of all, apart from presents, is really to be able to have a normal life, the end of COVID, a vaccine,” she says.

“The letters to Father Christmas are a sort of release for them. All this year, they have been in lockdowns, they have been deprived of school, deprived of their grandpas and grandmas. Their parents have been occupied by the health crisis and whatnot. So we, of course, can tell that the children are putting into words everything they have felt during this period."

Replying to 12,000 letters per day, the team of 60 elves sets aside some that move them or catch the eye. Lola's is among those that have stood out so far, with its heartfelt confession to Santa that “this year more than the others, I need magic and to believe in you.” The elves say their sense is that children are confiding worries that they may not have shared with parents.

Emma Barron, a psychiatrist specializing in the mental health of children and adolescents at the Robert Debré pediatric hospital in Paris, says landmark dates, including birthdays and holidays like Christmas, provide structure in childhood. Amid the pandemic's uncertainty, the Dec. 25 anchor of Christmas is particularly important to kids this year.

“Children are quite surprising in that they can adapt to many things,” Barron says. “But rhythms, rituals and things like that are an integral part of children's mental stability."

As the letters flood in, it's also clear that this goes beyond childhood. Santa is proving a beacon to adults, too, with some writing to him for the first time since they were kids.

One asked for “a pandemic of love.” A 77-year-old lamented that “lockdown is no fun! I live alone.” A grandparent asked Santa to “say ‘Hi' to my two grandkids that I won't be able to see this year because of the health situation.”

“Your mission will be hard this year," wrote Anne-Marie, another adult suppliant. "You will need to sprinkle stars across the entire world, to calm everyone and revive our childhood souls, so we can dream, at last, and let go.”