Scottsdale Unified board president Jann-Michael Greenburg was replaced by an interim president following a dossier scandal where he reportedly collected private, sensitive information about district parents.

SCOTTSDALE, Ariz. - Hundreds of Scottsdale parents have signed a petition that calls on Scottsdale Unified School District's Governing Board President Jann-Michael Greenburg to resign after several parents claim that Greenburg was compiling sensitive information on parents who have been outspoken against the district.

On Nov. 15, a special meeting was called between the members and Greenburg was replaced by an interim president.

Board member Libby Hart-Wells asked Greenburg to resign and then asked for a new board president to be nominated. The motion passed and the board voted for Patty Beckman to serve as the new interim board president until the term ends in January.

Greenburg says he believes there are "bad actors" involved in the online drive containing personal information and says the Scottsdale Police Department is investigating.

Interim president Beckman asks Greenburg to consider resigning because she says she’s worried the focus will be on him and not the work the board does for students in the district.

"We have a lot of work to do. We need to work with our parents, our community, our leadership, and we need to get back on track," Beckman said.

Greenburg did not leave the board, instead, he read a statement during the meeting, saying, "There appear to be bad actors involved, and I'm confident our law enforcement professionals will quickly resolve these issues. Social media and today's political environment can cloud judgment and generate fear and cause all of us to react hastily." 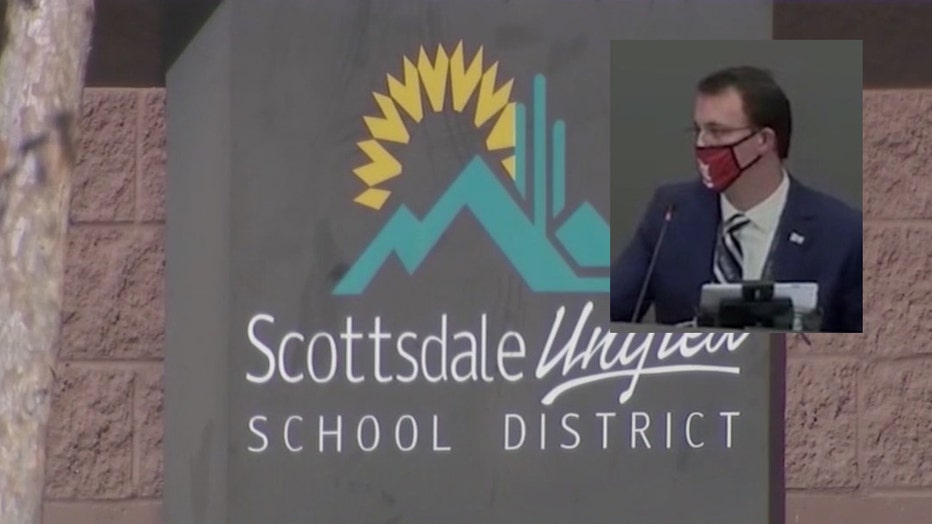 Dr. Scott A. Menzel, superintendent of Scottsdale Unified, released a statement on Nov. 15, saying, in full:

"November 15, 2021 During a special meeting this evening, the SUSD Governing Board voted to replace JannMichael Greenburg as president of the District’s Governing Board and to appoint Board member Patty Beckman to serve as president for the remainder of the calendar year. The Board acted in light of the information recently revealed that a dossier containing sensitive information on SUSD parents was allegedly created and maintained in publicly accessible Google drive folders by Mark Greenburg, the father of Jann-Michael Greenburg, and shared by the latter. The focus of the Governing Board should remain solely on improving educational opportunities for each and every one of our District’s 22,000 students. The decision this evening ensures that with new leadership this will be the top priority. Last week, the District initiated an independent forensic investigation into whether any District resources were used to create, maintain or modify the dossier. The Scottsdale Police Department is also investigating the matter to determine if any laws were broken in the dossier’s creation, maintenance or use. The District is fully cooperating with authorities in that investigation. The existence of these files is disturbing and unacceptable. The Board, in fulfilling its duty, has the obligation to be honest, fair, caring and respectful. Further, it must avoid conduct that creates the appearance of impropriety or conduct unbefitting a public official. The dossier, which included disparaging descriptions of parents who share differences of opinion on some matters with Board members and the District, is inconsistent with the Board’s prescribed duties and with our core values. We are a District committed to partnering with parents, and we welcome civil discourse regarding educational matters. We must always focus on creating an environment that encourages communication between the citizens and the District and that advances the public interest. Everyone should be respected and treated with dignity. Together, we can harness our collective commitment to the success of our students and begin the process of healing."

'Photos of people's children in there'

Parents are upset after the discovery of a Google Drive, which they claim is linked to Greenburg. In it are hundreds of personal documents and files on more than four dozen parents who were considered enemies of the board.

"Photos of people's children in there," said Amy Carney. "Divorce documents, bankruptcies, mortgage statements. Really personal information that they were compiling on parents."

Carney, a candidate for a seat on Scottsdale Unified's Governing Board, says she is one of the parents included in the files. She says she was part of the e-mail thread in which Greenburg, revealed the files.

"It was the five of us on that e-mail string, and he was trying to prove, I think, how she was anti-Semitic, and he was showing screenshots and he accidentally gave us the one of his Google Drive," said Carney.

Several Arizona lawmakers, including Attorney General Mark Brnovich, are weighing in, with Brnovich tweeting "these are the real domestic terrorists the FBI should be investigating, not people exercising their First Amendment rights."

"It's just completely unacceptable behavior from an elected official," said Carney. "It's really bizarre behavior and dangerous, and many people are afraid."

"I found out about the drive shortly before it was released. I have a file in there, he has background checks on me, pictures, social media posts, my kids' information, so it was very disturbing. I felt very violated," said Carine Werner, a district parent.

Meanwhile, a petition drive to recall several Scottsdale board members was initiated in August as many parents were upset about the mask mandate the board put in place. However, in the last several days, parents say they’ve seen a huge boost in the number of people wanting to sign the recall petition.

They need more than 21,000 signatures from people in Scottsdale Unified. The deadline to turn in the recall petition is Dec. 18.

The Maricopa County Superintendent of Schools says it’s extremely rare to meet the signature requirement and the majority of petitions fail to qualify for a recall election.

The Maricopa County School Superintendent is watching the situation closely.

There does seem to be a momentum," said Steve Watson, Maricopa County School Superintendent. "Not only do I receive that recall information, it’s my responsibility to appoint someone to a board position if somebody does resign."

While we have made several attempts to contact Greenburg, he has not returned any of our calls or e-mails. Meanwhile, Scottsdale Unified officials have issued a statement, while also say they have started the process of hiring an independent forensic investigator to determine school resources were used to compile the dossier.

"The Scottsdale Police Department is aware of the allegations against Scottsdale Unified School District President Jann-Michael Greenburg. We are conducting an investigation into the matter and will report our findings once it is complete. Anyone with information regarding this case can contact the Public Information Office at 480 312-5562."

Scottsdale Unified board president Jann-Michael Greenburg has been replaced by an interim president following a dossier scandal where he reportedly collected private, sensitive information about district parents.

Hundreds of Scottsdale parents have signed a petition that calls on Scottsdale Unified School District's Governing Board President Jann-Michael Greenburg to resign, as the district deals with mounting controversy over claims that Greenburg was compiling sensitive information on parents who have been outspoken against the district. FOX 10's Nicole Garcia reports.

As a scandal over a dossier of parents with children attending schools within the Scottsdale Unified School District continues, Arizona's Attorney General is asking federal officials to investigate the now-former school board president. FOX 10's Nicole Garcia reports.

As the scandal continues, Arizona Attorney General Mark Brnovich is asking the FBI and the Department of Justice to investigate Greenburg.

"Asking if there’s possible violation of federal privacy laws, and instead of Merrick Garland focusing on parents being domestic terrorists, they should be focusing on government bodies like school boards that are trying to intimidate parents," said Brnovich. "Even if [Greenburg] resigns, if there was a possible misuse of public money, that's a problem."

Abuse of position and power, possible violation of parents' constitutional rights are a couple of issues Brnovich mentions in his letter.

"The rule of law has to mean something, and no matter what your position is, you can’t intimidate or keep dossiers on your opponents. It's against everything we stand for," said Brnovich. "No one should ever be intimidated or be in fear for exercising their first amendment rights, and no parent ever should be afraid to speak out at a school board meeting."