Woman accused of beating, suffocating mother to death in Avondale

The investigation began after police were called to an apartment complex near Dysart and Buckeye Roads on Nov. 17. There, they found the body of an old woman stuffed inside of a water heater closet. Now, the victim's mother is under arrest. FOX 10's Irene Snyder has reaction from neighbors.

AVONDALE, Ariz. - A woman is facing assault, vulnerable adult abuse and murder charges after she reportedly beat and suffocated her mother to death in their Avondale apartment, court documents alleged.

The investigation began after police were called to an apartment complex near Dysart and Buckeye Roads on Nov. 17. When they arrived, they met 56-year-old Norma Grajeda, who claimed she was locked out of her apartment and that there was a man named "Marcus" inside who wouldn't leave.

When they came to her unit, they found that the door was unlocked and no man was inside.

Police discovered that the body of Grajeda's 86-year-old mother was "folded up" inside of the apartment's water heater closet, officials said. She was found with signs of head trauma and other injuries.

When officers questioned Grajeda, she claimed that her mother had let two strangers inside the apartment a few days prior. She said one of them named "Marcus" told her mother that he would give her $14,000 to kill Grajeda. 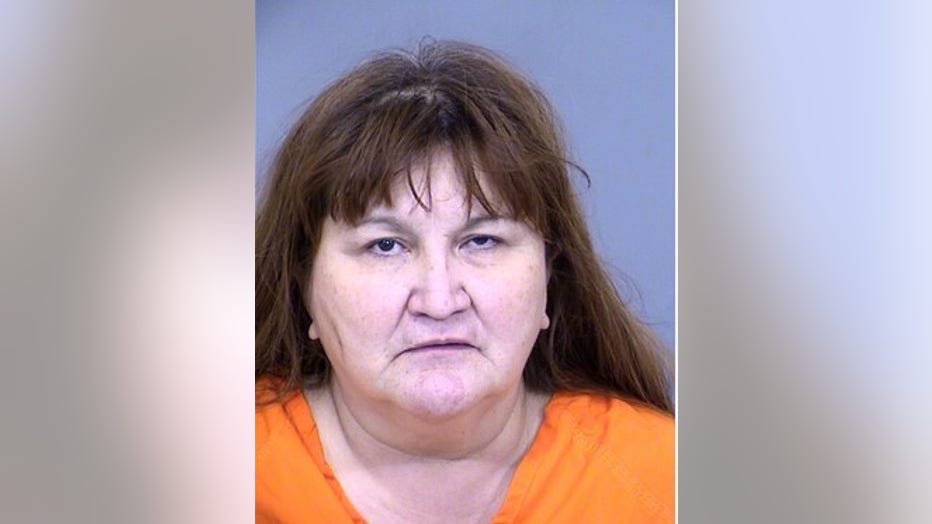 The 56-year-old woman alleged that she left the apartment after hearing this. When police asked her about the red stains on her shirt and the injuries on her arms and hands, Grajeda claimed that she had a "scuffle" with her mother.

Detectives found a blood trail leading from the living room couch to the water heater closet. A hammer was found on one of the couch cushions. More red stains believed to be blood were found on Grajeda's clothes and a washcloth.

The 56-year-old denied killing her mother and insisted that she had left the apartment while "Marcus" was inside.

"They checked with the nearby apartments, the neighbors, surveillance video that the neighbors did have, and they watched the comings and going in and out of the apartment, and used that evidence to determine that the only person coming and going had been Norma," said Jaret Redfearn with Avondale Police.

"She showed neither sadness or remorse and repeatedly told detectives she did not believe the 86-year-old victim was deceased," officials said.

The last time that neighbors saw the victim, who we now know is named Betty Burgett, alive was on the evening on Nov. 17.

The next morning, Leandree Armstrong, who lives in the upstairs unit, said that Grajeda was acting weird.

"As I was getting ready for work, she was just like walking back and forth, kind of like pacing. Real anxious. There was something really wrong going on," said Armstrong.

Neighbors say the pair kept to themselves, and rarely stopped to talk to anyone.

A death investigation is underway after police say a woman's body was found at an Avondale apartment complex near Dysart and Buckeye Roads. It's not clear how the woman died, but police say they are not looking for any suspects. The woman's identity was not released.