A video posted to social media by a Ukrainian woman shows burned out Russian military vehicles. The narrator asks people to share this video so "any Russian soldier coming to Ukraine will see what will happen."

Ukrainian soldiers who told a Russian warship to "go f--- yourself" are "alive and well," according to a Facebook post published by the Ukrainian Navy.

"Regarding the Marines and border guards, who were taken captive by Russian occupiers on the island of Snake. We are very happy to learn that our brothers are alive and well," the post, which was published on Monday, read in part.

The Ukrainian soldiers were on Zmiiny Island, also known as Snake Island, and were live-streaming on Feb. 25 as Russian warships issued a warning to the soldiers saying, "I am a Russian warship. I ask you to lay down your arms and surrender to avoid bloodshed and unnecessary deaths. Otherwise, you will be bombed."

One Ukrainian soldier on the island responded, saying, "Russian Warship, go f--- yourself."

After the exchange, the Russian ship opened fire.

While it was believed all 13 soldiers were killed during the incident, the State Border Guard Service of Ukraine (SBGSU) posted on its Facebook page on Feb. 26 that it believed they actually survived.

"The SBGSU and the Armed Forces, like the whole of Ukraine, have received hope that all of Zmiiny's defenders are alive," the post read in part.

Before it was known that the soldiers survived the attack, Ukrainian President Volodymyr Zelenskyy had announced that he would award each of the 13 troops with the title Hero of Ukraine, the Washington Post reported. 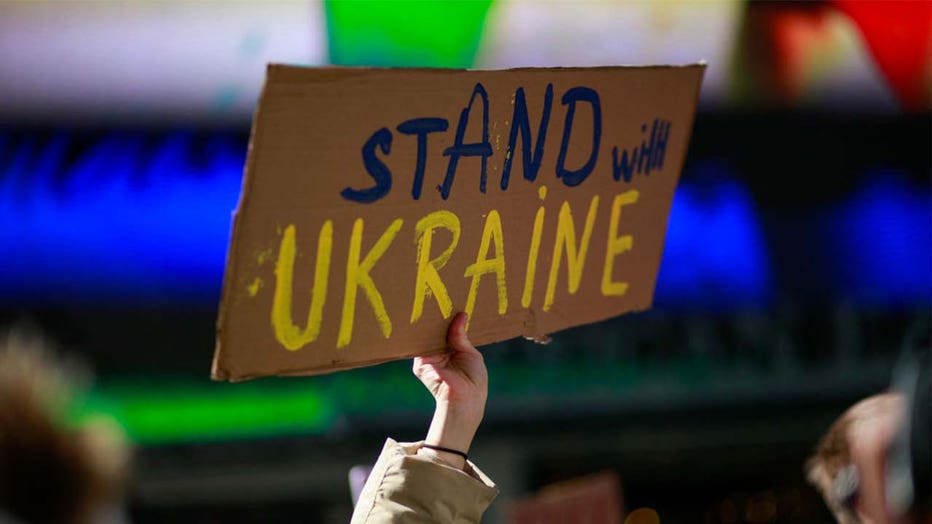 FILE - A demonstrator carries a sign during a protest in support of Ukraine in Times Square, New York, on Feb. 26, 2022.

Meanwhile, Ukrainian and Russian delegations met Monday on Ukraine’s border with Belarus. The meeting ended with no immediate reports of agreements, but Mykhailo Podolyak, a top advisor to Zelenskyy, said further talks could take place "in the near future."

Before the meeting, Zelenskyy’s office said Ukraine would demand an immediate ceasefire.

Filippo Grandi, the United Nations' High Commissioner for Refugees, tweeted that more than 500,000 people have fled Ukraine for neighboring countries since Russia's invasion started on Feb. 24.

Additionally, the Russian currency plunged about 30% against the U.S. dollar on Monday after Western nations moved to block some Russian banks from the SWIFT international payment system and to restrict Russia’s use of its massive foreign currency reserves. The ruble later recovered ground after swift action by Russia’s central bank. The Moscow stock exchange was closed all day.

The U.S. Treasury Department announced new sanctions targeting the Russian central bank and state investment funds. It said the move effectively immobilizes any assets of Russia's central bank in the U.S. or held by Americans.

The president of neutral Switzerland said his country would adopt the EU's sanctions targeting Russians, including asset freezes, all but depriving well-heeled Russians of access to one of their favorite safe havens to park money.