PHOENIX - Some Phoenix residents are seeing an uptick in critters. Not coyotes, but raccoons have been spotted roaming around day and night.

Part of it is that people have cameras that watch their yards all night, so they're catching things they haven't in the past. Game and Fish says the raccoons are coming into these neighborhoods because they're finding food very easily in the area, and that may not be a good thing.

They've been showing up in the dead of night.

"I woke up and all of the security lights were on and I'm like, 'OK, what's going on?'" said Kelsey Dake. "Pulled open my camera app and saw four raccoons instead."

"I was born and raised here, and it's just like I've never heard of raccoons in Phoenix before," said Dake.

Less than a mile north of Dake in the Royal Palm neighborhood, more urban raccoons were spotted. On Facebook, neighbors like the Nolans share photos and video of visitors. Meanwhile, the Wards also caught raccoons on their security cameras.

"I catch them on my camera at least once or twice a week," said Liz Ward. "A little pack of them. Six or seven."

Amy Burnett with Arizona Game and Fish says raccoons are showing up in Valley neighborhoods because humans are doing something.

"I would bet if you went and looked around that neighborhood, you've got someone feeding a feral cat colony and they're leaving out cat food," said Burnett. "Raccoons love cat food and they will eat right alongside the cats. Sometimes, they get aggressive with people or other animals."

Burnett recommends that people discourage raccoons from coming into their yards. 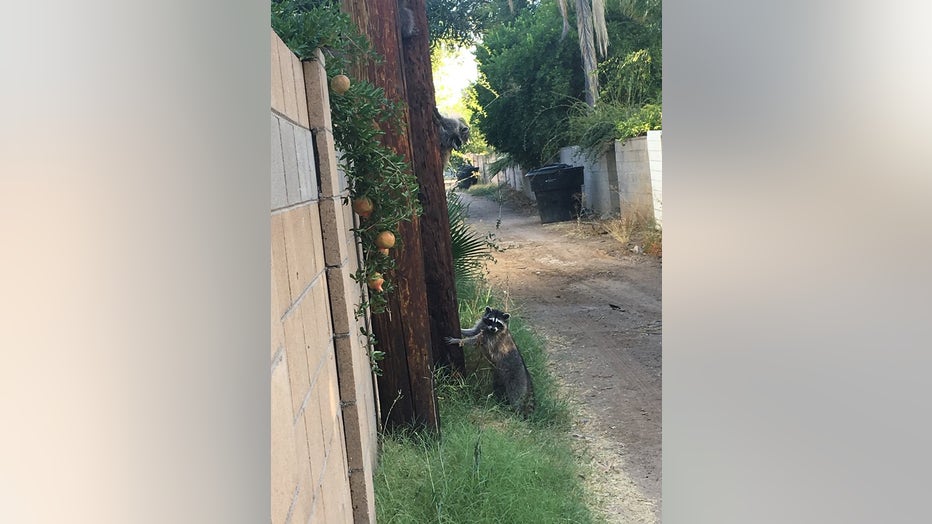