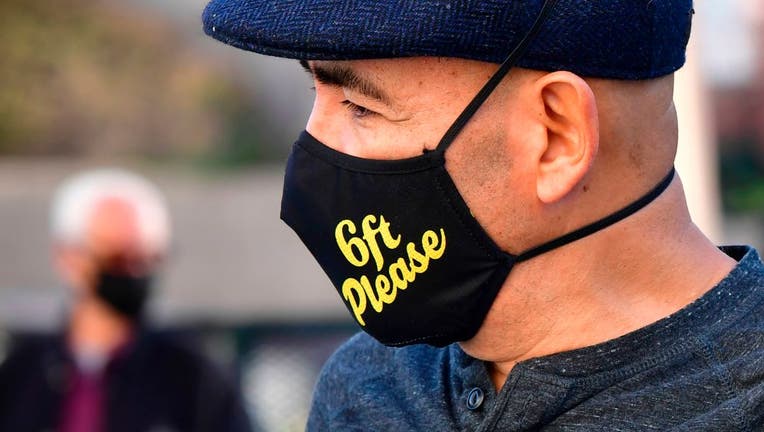 People wear facemasks due to the coronavirus pandemic, including one that reminds others of the 6-foot social distancing guideline, amid the ongoing surge in COVID-19 cases in Los Angeles, California on December 15, 2020. (Photo by Frederic J. BROWN

LOS ANGELES - According to findings released by researchers at USC, three out of 10 Los Angeles County residents and nearly half of adults in the U.S. are not wearing protective face masks when they are in close contact with people who live outside their households.

The USC Dornsife Understanding Coronavirus in America Study found that 67% of Los Angeles County residents are likely to wear face masks when in contact with people from other households, and that 63% wear face masks while exercising outside, compared with the national average of 22%.

Los Angeles County residents were also less likely to come into contact with people outside of their households, according to researchers.

The study found that 83% of U.S. adults view wearing a mask as an effective way to stay safe from COVID-19, but that two-thirds of Americans reported being less than six feet from people outside their household in early December and that only 51% said they always or mostly wore a mask while doing so, researchers said.

"Despite L.A.'s soaring infection rates, it is clear from our data that Angelenos are more willing to wear a mask than people in other parts of the country on average,'' said Kyla Thomas, a sociologist with the USC Dornsife Center for Economic and Social Research. "Still, rates of mask-wearing are far from where they need to be in L.A. to slow the spread of the virus, especially among those who are young, white or socially active.''

RELATED: Biden signs 10 executive orders on pandemic, warns things will ‘get worse before they get better’

The study also found that:

-- white people were the least likely to consistently, always or most of the time,  wear a mask (46%) while in close contact with people from other households, compared to 67% of Blacks, 63% of Latinos and 65% of people of other races;

-- 57% of people in urban areas reported wearing a mask always or most of the time while close to people outside their household compared with 52% of people in suburban locales and 42% of people in rural areas;

-- four in 10 Americans visited someone else's home, with just 21% of them wearing a mask most or all of the time they were together;

-- 14% of Americans gathered in groups of 10 or more people, with only 46% wearing a mask most or all of the time they were together.

As COVID-19 cases rise in LA County, Councilmember Gil Cedillo is putting up COVID-19 warning signs on sidewalks in his communities with the highest concentration of cases.

"These findings indicate a need to redouble efforts to convey consistent messages about the overall importance of wearing masks, but more than that -- where and when to wear them,'' said Arie Kapteyn, director of the USC Dornsife Center for Economic and Social Research. "Too many seem to lack a clear understanding of the risks posed by friends and family outside their immediate households.''

The findings are based on 6,078 study participants, including just more than 1,100 Los Angeles County residents who responded between Dec. 9 and Jan. 6.

Researchers noted that the margin  of sampling error is +/-1 percentage points for the national sample and +/-3 for the L.A. County subsample.