One of the men reportedly pointed a gun at the employee and the other acted as a lookout.

PHOENIX - A video of an armed robbery in Phoenix from Sept. 1 that involved two men was released nearly a month later, and investigators need help identifying the men.

At around 2:10 a.m., surveillance video shows one of the suspects walking into a Circle K convenience store near 19th Avenue and Happy Valley Road and asking an employee for cigarettes. 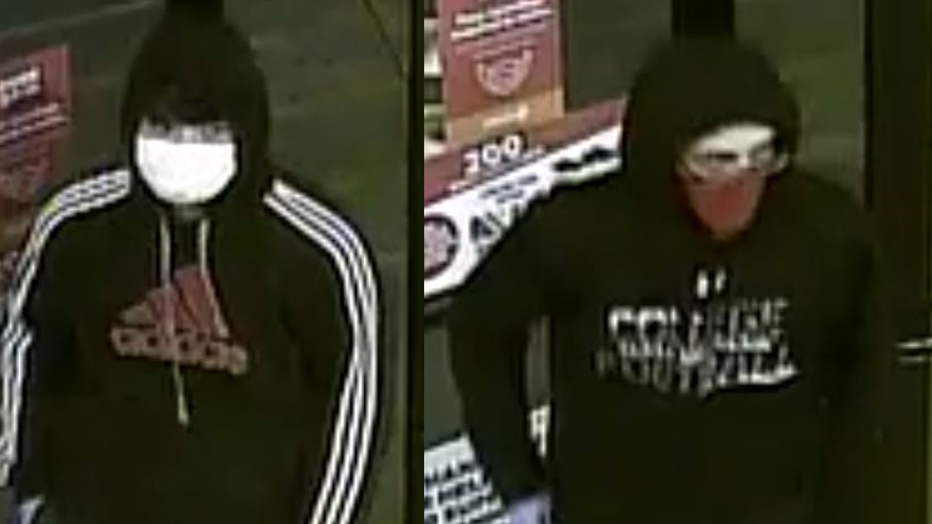 When the employee turns around, the suspect is seen pointing a handgun into his side and demanding cash.

A second suspect is seen acting as a lookout during the armed robbery.

The first suspect is described as a white or Hispanic male, 25 years old, 6' 0" tall, 170 pounds with hazel eyes. He was wearing a black hooded sweatshirt with "college football" on the front, a red mask, black track style pants with white stripes, gloves and armed with a black semi-auto handgun, according to police.

Police describe the second suspect as a white or Hispanic male, 25 years old, 5' 8" tall, 230 pounds with curly hair. He was wearing a black and white hooded sweatshirt with white stripes on the shoulders and the Adidas logo on the front, dark shorts, and a white mask.

Anyone with information can call 480-WITNESS. You can remain anonymous and receive a cash award for tips leading to an arrest or indictment.

One of the men reportedly pointed a gun at the employee and the other acted as a lookout.